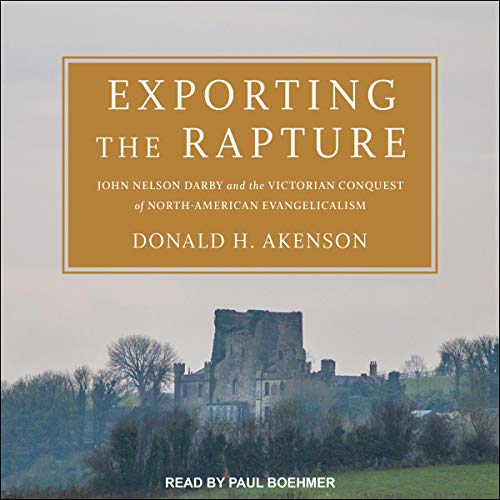 Apocalyptic millennialism is one of the most powerful strands in evangelical Christianity. It is not a single belief, but across many powerful evangelical groups there is general adhesion to faith in the physical return of Jesus in the Second Coming, the affirmation of a Rapture heavenward of "saved" believers, a millennium of peace under the rule of Jesus and his saints and, eventually, a final judgement and entry into deep eternity.

A key figure in this process was John Nelson Darby. Akenson emphasizes that, as strong a personality as Darby was, the real story is that he became a vector for the transmission of a terrifically complex and highly seductive ideological system from the old world to the new.

So beguiling, adaptable, and compelling was the new Dispensational system that Darby injected into North American evangelicalism that it continued to spread logarithmically after his death. By the 1920s, the system had become the doctrinal template of the fundamentalist branch of North American evangelicalism and the distinguishing characteristic of the best-selling Scofield Bible.

Odd narration and far too liberal.

I'm not a pretribulational rapture believer and was hoping for some insight on its formation. The author tries to suggest that before Darby the physical return of Christ was not believed to be true.
Basically he disregards patristics and takes the radical view that Darby invented any form of a literal belief in eschatology. I'm assuming the author is a ammilennial which is fine, but that is a view they tend to take as it supports their beliefs. the net result is an emphasis In all the wrong places and a lot of agenda driven vitriol.

So I guess if you are ammilennial and you want to have what you already believe confirmed this book is for you. For everyone else take a pass.

I listen to a lot of audiobooks and at first I thought the narrator was a robot voice. it's not but the meter is so odd that it takes some serious concentration to pay attention.