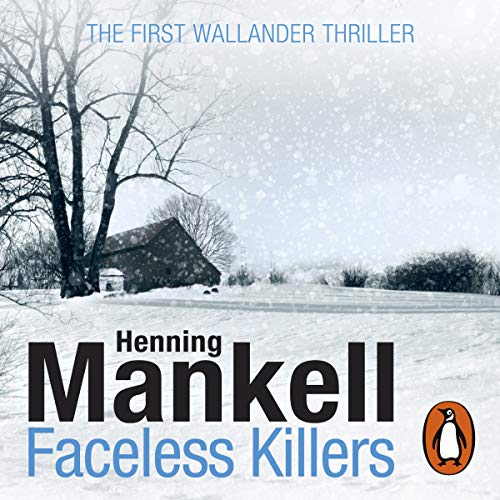 One frozen January morning at 5am, Inspector Wallander responds to what he believes is a routine call out. When he reaches the isolated farmhouse he discovers a bloodbath. An old man has been tortured and beaten to death; his wife lies barely alive beside his shattered body, both victims of violence beyond reason. Wallander's life is a shambles. His wife has left him, his daughter refuses to speak to him, and even his ageing father barely tolerates him. He works tirelessly, eats badly, and drinks his nights away in a lonely, neglected flat. But now Wallander must forget his troubles and throw himself into a battle against time.

What listeners say about Faceless Killers

A good example of the series.

Enjoyed making the comparisons with the old, original Wallender series and the modern, Branagh one.
Interesting what a scriptwriter chooses to focus on, what they leave out and how they resolve the plot often quite differently.
Thank you Sean Barrett again. My favorite voice actor.

especially the ones narrated by Sean Barrett.

I wish he read more of Mankell's books.

“What kind of world are we living in?”

Faceless Killers (1991), Henning Mankell's first Kurt Wallander detective/police novel, opens with an aged Swedish farmer waking up in the middle of the night on January 7, 1990 trying to dismiss his feeling that something dreadful has just happened: “After all, what could happen here? In the little town of Lenarp, just north of Kade Lake, on the way to beautiful Krageholm Lake, right in the heart of Skane? Nothing ever happens here." He knows that "People like us don't have any enemies." Alas, as he soon learns, his neighbors have just been savagely attacked, the husband bashed and cut to death and the wife beaten and noosed. Who could do something like that? And why? And why did the attackers feed couple's horse before vacating the scene of the crime? And can veteran detective Kurt Wallander apprehend the criminals?

Mankell efficiently and compellingly fulfills the mystery-police-procedural genre requirements: brutal murders, red herrings, dead ends, epiphanies, media leaks, social problems, ineffectual government officials, unpredictable action scenes, believable supporting characters, and a flawed but good protagonist. And it feels interesting and fresh enough, perhaps partly because it takes place in Sweden, land of exotic names, bitter winters, and police who don't carry guns. Small touches in the novel hold up an interesting mirror to America, as when a policeman says about a "slaughterhouse" of a crime scene, "It was worse than you could imagine . . . Like an American movie." And through Wallander's point of view Mankell captures the dramatic and unsettling changes going on in Sweden in the 1990s: disorganized multi-ethnic refugee camps, organized nationalist neo-Nazis groups, increased drug and violent gang activity in previously quiet rural areas, and so on. At one point Wallander thinks, “A new world had emerged, and he hadn’t even noticed it. As a policeman, he still lived in another, older world. How was he going to learn to live in the new?” For "We're living in the age of the noose," a new age of senseless violence and fear.

Despite the barren and silent Swedish autumn and winter, despite moments when Wallander does something “unforgivable and dangerous,” despite moments when he thinks, “Somewhere in the dark a vast meaninglessness was beckoning. A sneering face that laughed scornfully at every attempt he made to manage his life,” the novel is not a downer. There is the appealing grim humor. The human characters. The neat lines sprinkled throughout. (E.g., “Every time he stepped into someone’s home, he felt as though he were looking at the cover of a book he’d just bought.” And “There’s no such thing as a murderer’s face.”) And, after all, Wallander is "a policeman to the core."

It is not a perfect novel. At one point, for instance, Wallander receives a call from a woman who whispers, “They’re here!” and he with unbelievable obtuseness says, “Who?” If the reader immediately knows "their" identity, surely Wallander, a veteran policeman with great instincts who's been living the case for months, would surely know it at the same time, if not first.

Sean Barrett gives a professional and appealing reading of Faceless Killers. I've listened to him read Kafka on the Shore, Waiting for Godot, and The Silver Sword, and each time he's been great. I appreciate that his women sound like people, not like a man striving to sound like women. He enhances the book. I am curious, though, why the Swedish original lasts 9+ hours, the Dick Hill read version about 9 hours, and Barrett's only about 8 hours. . .

Since the realistic contemporary detective-mystery-police-procedural is not my favorite genre, I'm unsure whether or not I'll continue the Wallander series, especially because the remaining books available are not read by Sean Barrett, but fans of that genre (especially examples set in an exotic country) should enjoy Faceless Killers.

Would you consider the audio edition of Faceless Killers to be better than the print version?

What does Sean Barrett bring to the story that you wouldn’t experience if you just read the book?

Neither but kept us guessing to the end

One of the problems with this title is the unavoidable comparison with Nesbo, especially given Sean Barrett's excellent narration of both authors. Wallander is, for me, a less interesting and less well developed character than Harry Hole, but this is the first in the Wallander series (apart from the more recent "prequel") so maybe he will develop over the subsequent books. The story is solid, and sufficiently complex to maintain interest, so I will be giving the rest of the series a go. I just have yet to develop an empathy for the characters

What disappointed you about Faceless Killers?

A whole host of things disappointed me about this book. Wallander is your basic bland divorced police detective struggling with his own bland demons.

Wallander takes a right wing stance on immigration and crime, and despite various claims that Mankell is bravely tackling the anti-immigrant sentiments present in Sweden, the reality is that while many of the white characters are named, people of colour are referred to consistently as “the Iranian”, “the Somalian” etc, even when they are the victims of crimes. The book is anti immigrant and has a distinct anti-refugee tilt in which refugees are described as illegal immigrants arriving by the boatload to overwhelm Sweden, and the only real criticism of the concentration camp living arrangements they are forced into is that they are disorganised and too flammable.

Critical of anyone advocating a social approach to youth crime rather than prison, Wallander sexually assaults his (only) female colleague, who subsequently appears to forgive him with hints of an impending affair, something only a man could write.
He also drink drives, but we as the audience are supposed to forgive this little indiscretion as well, whilst sympathising with his reactionary beliefs about criminals, who’s circumstances are barely ever truly engaged with.

Would you ever listen to anything by Henning Mankell again?

Honestly it’s just a fairly standard mystery novel, and not deserving of most of its acclaim.

After reading the books at the end of this series I headed back to the beginning where I should've started! I did enjoy this book and as usual excellent narration. This did fill in some of the gaps for me with incidents mentioned later on, story not as good as the others but still worth a listen.

After this book I found The Dogs of Riga -2nd book and I really did enjoy that - an excellent listen I couldn't put down- fills in the gaps of how Wallander met Bieber and the story behind her- thoroughly enjoyable listen and highly recommended. Great story with lots of twists and turns right up to the end! Am miffed that this was the last book for me to read in the series so off to find a new series!

So simple, yet so captivating

The first time I head of Kurt Wallander was when I watched an episode of UK series Wallander starring Kenneth Branagh. It was a truly refreshing experience. The lead character who is human enough to be believable and yet exciting enough to observ and follow. Since then, I've watched all the available episodes and decided to turn to the source.

The biggest disappointment about the book was that the episode based on it follows it almost to the point. I always knew what was going to happen - hardly anything was changed in the adaptation. Which was the right thing to do as the original, this book, is simply fantastic. The main theme of the book is a very present-day problem not only in Sweden, but all over Europe.

The narration is slow. And is rightly so. Kurt is not one of the those detectives that runs around shooting his gun at everything that doesn't look right. He is very down-to-earth, he is smart, but, what's most important, he is persistent. He will try over and over, and over again, until he succeeds. Slow pace of narration helps to get into the mood of the world surrounding Kurt Wallander.

This book held me in its spell from the moment that I started to listen to it. Truly addictive.

I found it very slow moving.I felt the mystery was never going to finish.
I have listened to other books read by Sean Barrett.He is a great storyteller.
In this book ,He tries his best to create tension and suspense with the characters but I just didn't find the story very gripping.

I liked this book, although I found it quite short and quick to finish, this may be because i have just finished the fantastic series of Jo Nesbo's Harry Hole novels which were fantastic and were each double in length. However I fee there is more to learn about the character of Wallander and will listen to book 2.

Great story, characters and flow. finally got round to downloading this and not disappointed

wallander book one a good start

a very good reader and a very good start to this set of books....enjoy bookone

I’d read Italian shoe by Henning Mankell and had really enjoyed it. This was the second book by him I’d read and I wasn’t that taken with it. It was very drawn out and not a particularly gripping story with a few loose ends not tied up. Disappointing