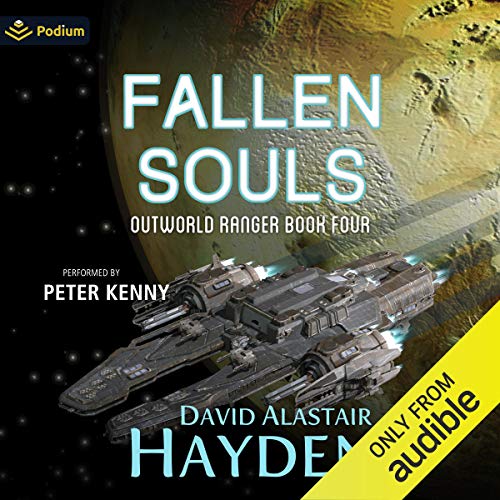 But with the warships of the Dark Messiah closing in on them, their mission has never been in greater jeopardy. Cornered, their options and allies are few. And the Outworld Ranger suffered extensive damage getting them this far.

To make matters worse, an unexpected tragedy has plunged Oona, the young hyperphasic messiah, into her Trial of Corruption. With ancient evils threatening to rise once again, humanity is in dire need. If the crew can’t reach the mysterious genetics facility that disappeared when the Benevolence fell, then Oona won’t be the only one in danger of losing themselves to darkness.

What listeners say about Fallen Souls

I absolutely binged this series in a few days. I should have slowed down, but it's so fast paced and action filled I couldn't stop myself. Thoroughly enjoyable. As with all of his performances Peter Kenny owned each character bringing them to Hayden's vision to life through is voice acting, timing, and delivery. I had never read anything from David Alastair Hayden before, but 5 books later I can say he has created a universe that is filled with so many worlds, characters, races, and possible adventures. Looking forward to the next Outworld Ranger book, it can't come soon enough.

Another excellent book in this series!

loved this and every other book in the series. Was unfamiliar with the author but now I'm a total fan. The prose was excellent. The book was funny, exciting and intelligent. looking forward to the next book!

I've listened to all the books in this series back to back to back and am absolutely in love with it! it has complex characters with reasonable and satisfying character development. The overall story is complex, but makes sense—I very much wish each book was longer, but alas!

As for the narration, it's absolutely wonderful...if you set it to .85x or .90x speed. While articulate, the base speed is a little too fast, especially when it comes to processing the amount of information provided in the text.

The whole series is wonderful to listen to. The plot was engaging in the character development was wonderful. I suggest this series to anyone who love science fiction Galaxy novels

Had to wait sometimes for the chapter 😁 but was amazing highly recommended for any syfy lover. picks right up where the last chapter finished.

The story is so much fun, a ripping tale of daring adventures, with great characterisation. Peter Kenny is an absolute genius, bringing this fantastic space opera to life!

I massively enjoyed this series, I'm gutted this is the last one at the moment but look forward to more. It feels a bit like Star Wars crossed with Indiana Jones (epic combo!)

If you enjoy the drones and minds of the culture or the polity - this series is for you. Banks fan, come hither ! The Kennymeister is here ! Groovy tech, super space battles and AIs..what more do you need.

was worth the wait awsome story and the narrator is brilliant ,roll on the next book

Entertaining, all action story told in a linear fashion. Narrator Peter Kenny brings it to life. I've not read any of the actual books in this series only followed the series via Audible. Manifestly well written, the narrative pushes you along with well drawn characters, I'm now impatient for the next book.