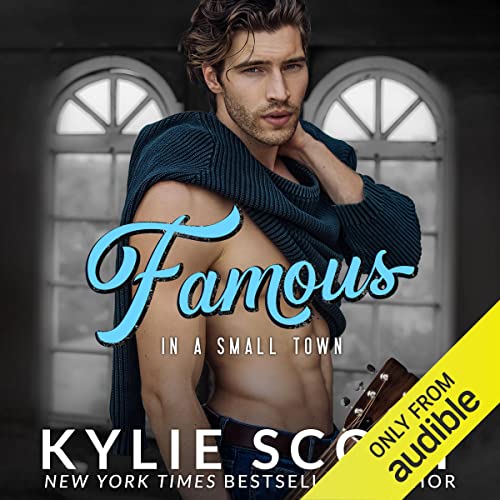 Famous in a Small Town

What chance does a small-town girl have with a world-famous rock star?

Two years after his wife’s death, rock star Garrett Hayes hasn’t moved on. But he has moved out of L.A. Where better to escape his past than a small town in the northern California mountains? If only he could get the townsfolk of Wildwood to leave him the hell alone.

Ani Bennet returned to her hometown for some much-needed serenity. The last thing she needs is a grumpy, too hot for his own good, rich and famous rock star living next door—and rent-free in her brain.

She set her fangirl tendencies aside and deleted his photo from her cell when they became neighbors. But when Garrett asks for help, she can’t say no. The problem is, spending time together is making those fangirl feelings resurface—and bringing them to a whole new level.

What chance does a small-town girl have with world-famous rock star? It’s time for Ani to set her fears aside and find out.

What listeners say about Famous in a Small Town

Don't bother with this one

This is a sad review. Kylie Scott has been a favorite author but I think this is the last book of hers I will buy. Seems like ever since 2021 she is so off her game. This book was boring, and SO MANY of the lines of dialogue are STRAIGHT out of her other books. I could literally read a line and tell you what of her other books it was from.
There was potential there to explore the damaged heroine Ani and the event that caused her to be paranoid and afraid. It could have been developed and made story more real...Sort of like Clementine in REPEAT, but no at one point after building some drama in the 1st part of the book Ani has a scare and just blurts it out and doesn't mention it again - WHAT? With all the research the paparazzi was doing on her this could have come out and caused more drama.
I really could not get behind either of the main characters ugg. Garrett was okay but ehh? His best friend and former band member was the best character that popped in and out of the book. I truly loved the Stage Dive books, Lies, and Repeat. The stuff she has written since is just bad. So sad really.

Could have been really good

This could have been a really good story, even started out well but then it seemed like the author just lost momentum. I felt like I got the condensed version and really wanted more. Andi Arndt did a fantastic job.

Love Kylie Scott’s past books. This was just too rushed and not very substantive. Felt like the story was missing something. It’s still a cute listen…just not the best.

I think it’s because I love K.S. books so much I was disappointed. If you love and buy all of a writers books you anticipate being wowed. This fell flat. Felt rushed. Everything fell into place…. In literally days. Also no adorable banter. Where’s the banter K.S. Is so amazing at? So I was bored reading this book. I guess it doesn’t matter but the cover doesn’t match the hero. Oh well, it won’t stop me from looking forward and buying her next book.

How love can sneak up you

The thing I like about Kylie Scott is her love is not rushed, she lets her characters get there naturally. This book made me laugh and cry because both characters come with their own baggage, but they get each each other. We had the privilege to see them fly again, it is true that we all have another half and when brought together the fire works begin. Thank you Kylie for bringing joy into my life.

I like this author but this story seems like it was straight out of the day dream of a 13 year old girl. I do not recommend this book. The narration was good but I don’t know what it is about Andi Arndt’s male voice. I can’t stand hearing it anymore.

Seems simple and abruptly ended. Generally like this author, however this book came up short.

Her story lines and her sense of humor are better than any other Romance writer. She keeps things lively, moving and funny at the same time. Andy Arnt I has the perfect delivery for Kylie’s writing. She has not put out a book for some time until this one and I have missed them. I was thrilled to see this new one come up on her list. Thanks Kylie!

Plenty to swoon over plus all the feels!

If you are a Kylie Scott fan, you'll love this. This type of story us what she does best. This book had me going 'awww' out loud, but had enough emotional tension to keep me invested. Great story. Great performance