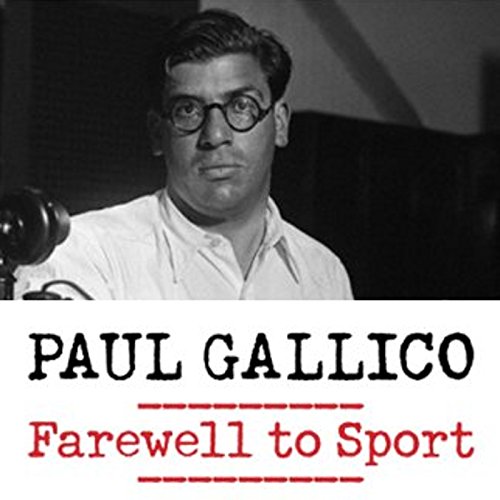 For 14 years during the golden age of sports, Paul Gallico was one of America's ace sportswriters. He saw them all - the stars and the hams, the immortals and the phonies in boxing, wrestling, baseball, football, golf, tennis, and every other field of muscular endeavor in which men and women try to break hearts and necks for cash or glory. Then in 1937, at the height of his game (and the height of the payroll), Gallico suddenly and famously called it quits and left the New York Daily News. But before he departed the world of sports, he left his legions of fans one last hurrah: a collection of his best sports essays called, appropriately, Farewell to Sport.

"David Stifel brings the perfect voice to this aptly named collection of essays on sports, first published in 1938. Emotions run the gamut from sadness to disgust, and Stifel deftly covers them all." (AudioFile)

What listeners say about Farewell to Sport

What did you love best about Farewell to Sport?

Paul Gallico was an example of good ol' two-fisted sportswriting. He pulled no punches when expressing any of his opinions and convictions, but in the midst of his muscular writing dwelt the mind of a poet, and when he wanted to he could wax rhapsodic with the best of them. David Stifel's narration jibes perfectly with Gallico's mode of expression, and does expert service to his varied moods and viewpoints. Clear and well paced, one begins by wanting to hear what Gallico had to say, and ends with wanting to hear more of how David Stifel says it. Great listen all around

Top Sports Reporter of the Golden Age Said It All

Before writing forty-one books, including “The Snow Goose,” “Mrs. ‘Arris goes to Paris,” “The Posidon Adventure,” plus numerous short stories and movies, Paul Gallico was the pre-eminent sports writer of the 1920s and ‘30s; these are the stories that prove it. He was a man of his time, recording his time, and he did not pull his punches. There are no proper, “politically correct” references here. He calls ‘em like he sees ‘em, with the slam-bang nouns and adjectives available to the reporter of the era. Here is history, in your face, with no excuses, and no matter one’s ethnicity. When he describes the experience of the ethnic athlete in the time of Jim Crow and Adolph Hitler, he is so vivid that this listener had to stop listening for a bit, in order to recover emotional equilibrium. I can feel tears glimmering on the edge even now, as I write this.

David Stifel is evocative and edgy, smooth and sly, very much a vivid interpreter of the author’s voice without being intrusive. A masterful reading of timeless observations in the pivotal decade in the life of a very American author who should be revered for not only his insight into the foibles of man, but his use and reverence of his language.

This is the perfect gift for the sports lover of any age.

1937 Sports Different But The Same

Paul Gallico is a decent writer, problem is he writes with the attitudes of the 1930's. If you can get past the bigotry and chauvinism and if you really like boxing, then this book is for you. The couple of really good portions of the book are that he makes a point about professionalism seeping into college sports, which proves how long this has been a problem. He also tells a nice Babe Ruth story. Otherwise, it was not for me