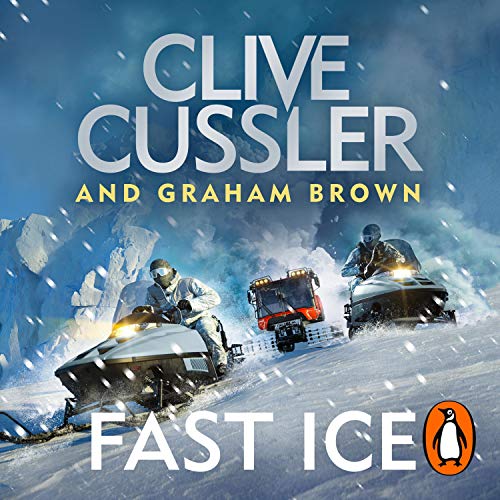 Kurt Austin races to Antarctica to stop a chilling plot that imperils the entire planet in the latest novel from the Sunday Times best-selling grand master of adventure, Clive Cussler.

In the early days of World War II, the infamous German Luftwaffe embark upon an expedition to Antarctica's icy continent. Their mission ends in disaster - its frozen secrets lying forgotten for almost a century....

When a former NUMA colleague mysteriously disappears, Kurt Austin and his assistant, Joe Zavala, journey to the freezing edge of the world to investigate. Amidst the perilous waters and frigid temperatures, they soon uncover a terrifying weapon - a man-made, fast-growing ice with the power to usher in a new Ice Age.

With a determined madman and a monstrous storm at their heels, Kurt and the NUMA team must unravel the Nazi-era plot and save the globe from a freeze that would bury it once and for all.

"Nobody does it better...nobody!" (Stephen Coonts)

What listeners say about Fast Ice

loved it. Great story and great narration. can't stop listening to these adventures. Cussler does it again.

A Good read as usual

Not as good as some of his other books. The story seemed to be to far fetcheted.

Quick paced. Accomplished characters, and an underlying sense of ecology saving. Thoroughly enjoyed it, as I seem to enjoy all these NUMA tales, be they Kurt Austin, or Dirk Pitt.

Such a great adventure story, flowed so well, found it hard to turn off, brilliantly narrated by Scott Brick :)

absolutely epic Cussler is BACK

I do enjoy the team in this series. Kurt and Jo are a great combination.

Great story, full of intrigue and excitement. I'm totally exhausted from knitting throughout the story.

Great narration by a legend and a thrilling story byvthe very best. you will not be disappointed