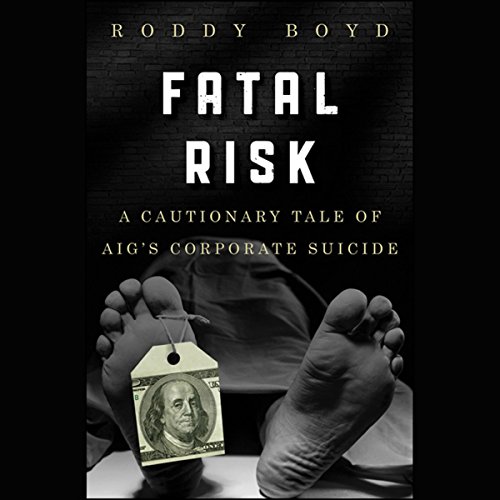 Long-listed for the FT & Goldman Sachs Business Book of the Year Award 2011.

The true story of how risk destroys, as told through the ongoing saga of AIG From the collapse of Bear Stearns and Lehman Brothers, the subject of the financial crisis has been well covered. However, the story central to the crisis-that of AIG-has until now remained largely untold. Fatal Risk: A Cautionary Tale of AIG's Corporate Suicide tells the inside story of what really went on inside AIG that caused it to choke on risk and nearly brining down the entire economic system. The book:

Fatal Risk is the comprehensive and compelling true story of the company at the center of the financial storm and how it nearly caused the entire economic system to collapse.

Awhile back I read this in print, and I like the audio even better. This qualifies as popular business history, though it is a mild shade more sober and less tinselly-popular than Michael Lewis's (for example, time is not spent on physical and personal quirks of people unless it very directly feeds the meaning of the story). Yet, we get vivid portraits of these players as distinctive personalities, decision makers and actors in business. It is right at the sweet spot for me. This author can craft a clear, short, tight sentence that will teach the reader a lot about recent/contemporary business and finance in a few words, wrapped nicely into a story that moves briskly. Of course, I am a seasoned business history reader who is very centered there, so the terminology is already familiar. As for the story itself: we get plenty of fly-on-the-wall moments, with just the right nuances, as AIG evolved from its fascinating origins in Shanghai and founder C.V. Starr via the amazing stewardship of Maurice "Hank" Greenberg (a business genius by anyone's measure) into a player in an increasingly whirling environment of modern financial markets. We see the personalities as key to the various steps that wound up in its historic crisis and bailout. The rivalries and battles, the doubts and flareups are here without sugarcoating. And the central toipic of life, as I see it, risk and its pricing and management, is cast in so many different lights. This story has everything I look for in Shakespeare, in modern dress.

This is another instructive book about the mortgage crisis of 2008 as it related to AIG. The writing is clear, the audible narration is performed well paced and the voice is well suited to the subject. I would recommend that the reader have some knowledge in finance and accounting—at least in the basics, to appreciate the descriptions of the financial vehicles. I have read other books that have discussed AIG and it’s executives’, but this one emphasizes AIG. Is it worth reading then? Yes.

A hagiography of AIG

Largely a hagiography of Hank Greenberg and AIG. Does have some interesting details and almost makes critical comments before immediately walking them back.

A book on criticizing Hank Greenberg

The author has a hate for Hank Greenberg and criticizes his management style; makes some very wild accusations about him. his sources are NEVER clear. Only to say... "someone close to the matter said..." or "high level officials agree..." if you know your history, AIG started to do shady deals after Greenberg left. Because Greenberg was a jerk to work with and had his nose in everything. The author has to admit that, but always compliments Greenberg with his backhand.

He continually hold Spitzer as a stand up guy. Trys to leave the suspicion that foul play was the cause of his fall. Saying only that he had a credit card charge at a brothel found by a suspicious activity report that banks have to do. WRONG! The SAR report lead to an investigation thought to have been related to bribe proceeds. Only to find out it had to do with PROSTITUTION! The author conveniently trys to use the word brothel to make it seem much less of a crime than it is.

According to some high level officials... this book is a F'n joke!

The author started off the book well, delving into interesting personalities and developing a compelling story. However, he quickly digressed by mentioning too many names and focusing on too many complicated financial products. It would've been better if he concentrated on a few key people and the key products. To make matters worse, he jumped around in the time sequence, which got very confusing. The narrator was okay, but at times would change his voice to sound like he was mimicking someone else, when in fact that was not the case.

Would you try another book from Roddy Boyd and/or Joe Barrett?

I would listen to another performance by Joe Barrett, who has a lovely wry voice and an intelligent way of presenting complex material.

Roddy Boyd's explanation of the complicated deals of AIG was impressively understandable. But the focus on particular "Big Guys" fell short of really explaining on what happened and why it caused the crash. I don't actually think Elliot Spitzer is the big villain of the piece here. So I guess I'd say, I might read Roddy Boyd again, but with a grain of salt.


What was your reaction to the ending? (No spoilers please!)

I finished annoyed at the Hank Greenberg focus. I guess he was a major source here, but his thoughts were mostly about how everyone should have continued bowing down to him, so he maybe wasn't the best elucidator of what went wrong.

I enjoyed (bad this way) all the infighting when Hank Greenberg was finally eased into retirement. His successor kept referring to him as "Mr. Greenberg," and the PR people were going crazy that this new CEO sounded like a schoolboy.

I didn't like the absolute contempt for Spitzer and the rule of law, as if the wealthy corporation and its executives should be above those poltroons who enforce the law. That was very weird, as the book had carefully shown how deceptive and criminal many of AIG's actions were, then suddenly erupts in horror when the legal system finally steps up and enforces the law. I didn't like the subtext that corporations should be allowed to do what they please, destroy the economy, bankrupt shareholders, and none of us or elected officials or law enforcement officials can say anything negative. I guess we're supposed to let companies just do what they want and then bail them out?

That incident really bothered me, obviously. It seemed totally at odds with everything else in the book. I guess we shouldn't look to businessmen and business reporters for any real insight, but authors have to be wary of identifying too much with their sources.

Did Fatal Risk inspire you to do anything?

I think I'll listen to it again, just to figure it out-- I have trouble understanding the strategy of this company, but I think one more listen will help!

David Faber's And the Roof Caved In, and the Harry Markopoulos book about Madoff were better at explaining what went wrong.

A Bit Over My Head at Times

Would you try another book from Roddy Boyd and/or Joe Barrett?

Yes. Joe Barrett did a great job and the content from Roddy Boyd was very inclusive.

I am not sure there was a favorite, as the main "character" was AIG. I guess I would most like to work for Hank Greenberg.

Joe Barrett did a fine job. He has a great voice. This may seem trivial, but it was easy to notice when the recording was stopped and he began reading anew, as the tone and even volume of the audio fluctuated.

Could you see Fatal Risk being made into a movie or a TV series? Who should the stars be?

I think it would make a good movie - much like the Enron film.

A little bit of financial history

The crisis of 2008 was perhaps predictable, but hardly anyone would have expected AIG to be so central. It is also enlightening how quickly a tightly controlled institution can convert into a casino which the senior managers simply do not understand.