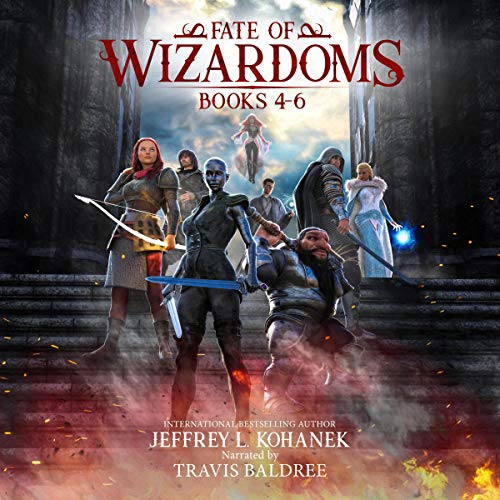 Forces of magic converge, placing the Eight Wizardoms on the brink of devastation...

The fate of the world hinges on a squad of misfit heroes caught in this conflict.

From Objects of Power, Fate of Wizardoms, Book Four:

A ruthless wizard lord conquers a neighboring wizardom, increasing his magic far beyond mere mortals. The more power he gains, the more he craves.

While nations war against one another, the Dark Lord rises. An army of monsters invades, sending the world toward the brink of doom.

A team of misfits find themselves at the fulcrum point of destiny, their world teetering upon their actions, certain to crumble should they fail. Led by cryptic passages from a dark prophecy, these heroes set off on two separate quests.

One expedition leads to the Enchanter's Isle, rumored to hide a mysterious object known as the Band of Amalgamation. The other involves the Arc of Radiance, a sacred object protected by a lost race of elves.

Can they be recovered before it is too late?

This three-book box set brings the acclaimed Fate of Wizardoms saga to a spectacular conclusion, narrated by the ultra-talented Travis Baldree.

Download and discover why listeners rave about this epic fantasy series.

First off, Baldree’s voice for Jase sounds like Casey Casum. It’s a good story, follows a normal Fantasy theme, with some good characters and some nice twists to keep it interesting. I would read another from Kohanek, for sure.

its always hard for me to find a good book,

. u will be put in a world, falling in love with many characters only to find yourself wanting more at the end of the story. the combat scenes are intriguing and well written. amazing detail that doesn't leave the mind to wonder or make up there own. wizards, dragons, dwarfs, and goblins are here. this story of God's and more to capture your heart and your thrill for adventure. I do not read many books or these days listen to any. I'm hard pressed finding books at all to my liking. this series is among the small shelf of books that make the hard critic of my desires.

This was a very "comfortable" read. Escapism is the best word to describe these last 3 books in this series. I would like to mention 1 thing that the editors didn't catch & the author has done repeatedly that gets a bit old. Please be consistent with your characters & their side stories. I keep wondering why in book 4 the characters act surprised about a topic that I know was told to them earlier in books 2-3 but they act like it's new to them in later books. No consistency or ability to keep the story straight. It does happen quite a bit thruout all of the books quite honestly. 🤔

Lord of the Rings meets Game of Thrones!

This is by far the best story and character development series I have discovered thus far! 20/10!! I’m telling everyone that this is the best!!

This adventure was full of surprises and very entertaining.

I have listened to hundreds of audiobooks over the past decade and I would rank this series in my top 3 all time favorites. Most books lack the ability to sustain the emotional connection with the characters, NOT THIS SERIES! I will be diving into the rest of Kohaneks books on my long drives ahead.

These books are great. Story and performance are amazing. Must read for anyone who loves fantasy books.

This series has everything, including an ending that will leave you both satisfied and heartbroken. The author builds a rich, vibrant world with a unique magic system, and populates it with an amazing cast of unforgettable characters. The way Mr. Kohanek weaves together multiple plot lines is very reminiscent of Jordan or Sanderson. I'd be remiss if I didn't mention the outstanding performance by the narrator. Mr. Baldree more than capably brings all these wonderful characters to life. I'm looking forward to the sequel series, as well as the upcoming Audible editions of Mr. Kohanek's Runes of Issalia series.

I loved it. The box sets are a great value. I just finished and already know I'll listen again. looking forward to the next books from this amazing author.

standard fantasy audible. nothing that will shock you but flows well enough that it helps pass time on a long drive without putting you to sleep

An epic finish to an equally epic tale!

I absolutely loved this story, start to finish!
Great world-building, fantastic characters, edge-of-the-seat action, sweet romance, hilarious banter, and a thumping climax; this series has it all!
I cannot recommend it enough!

Thought it was very similar to "Lord of The Rings" but i liked the story very much.🙂