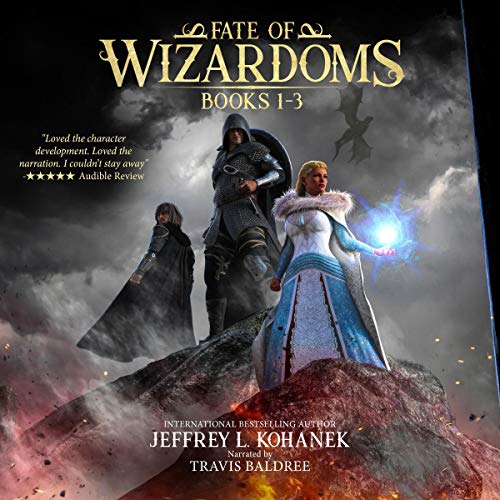 In a realm where wizards rule, magic reigns supreme. Power. The ambitious thirst for it. But when a power-hungry wizard lord seeks to expand his might, he triggers a series of events unforeseen. The balance of magic is altered, races of old return, and beasts of legend stalk the land.

This tale follows a squad of unlikely heroes:

These characters lead a compelling and memorable cast including ruthless wizards who vie for thrones able to grant the power of a god. How can one defeat a god?

Fate of Wizardoms is narrated by Travis Baldree, the same talent from Will Wight's Cradle series. This omnibus includes the first three books in the series. Fate of Wizardoms is a re-imagining of classic epic fantasy, told in a modern, fast-paced style packed with beloved genre tropes twisted in an uncommon fashion, perfect for fans of The Witcher, Kingkiller Chronicles, or Wheel of Time.

What listeners say about Fate of Wizardoms Boxed Set: An Epic Fantasy Series

Where to begin..the first book jumps around between characters, time and locations. Every thing thing that happens to any of the character is just spoon fed to them. No real danger, not really compelling, and not much to make you care about these characters.

The trite romance that was attempted was just sad. The scoundrel and the princess trope has been done, done well, but this was not.

After reading the blurb I was prepared to find something akin to David & Leigh Eddings’ Belgariad and/or Malorean series, but I was wrong. All the right characters are here but they are all tortured souls, very little humour among them. In the first 20 hours, I found the characters did not grow, or if they did anything to evolve they quickly regressed.

Every character’s background is covered to give the listener insight to why he/she is justified in being a tortured soul now, and yet it’s not engrossing in the least.

This book drove me back to the Belgariad in an effort to define the difference between the writing styles, and I think it might be description. The description in FoW is bland. And anti-climactic. Any anticipation that might build is quickly thwarted by dull reasoning or reference to the event which left their soul tortured...

The narration is fair, with good distinction between all characters.

I wish I had read the publisher's summary before I started the books.
I had trouble following the story initially but caught up half way through the first book, after that it was amazing and fun to read.

An Engaging Tale That's Not To Be Missed!

From the very first chapter Jeffrey Kohanek had me hooked. The suspense and action from that opening scene spurred me to the next and the next. When the action lulled the characters were built up and you fell in love with them.

This is a fun, funny and hugely entertaing story with a band of marvelous people that I hope I get to see more of. The next books can't come fast enough for me.

The Narrator seemed meant for this story and really sets that hook I mentioned above in this awesome omnibus.

High Fantasy with no safety net, this is a raw and fantastic story that I could not put down!

Being a fan of movies like Lord of the Rings and The Game of Thrones Saga , A friend introduced me to this series . Since it’s hard for me to read now because my works keeps me moving I decided
to get the audiobook. At first all the new characters overwhelmed me and trying to keep track of all the new places was difficult at best.
Halfway through book one everything started to click and the coaster ride began. JLK has created
In my mind a fascinating adventure that keeps me wanting more. Travis also does a wonderful job expanding the characters motivations and moods with his artful reading of this soon to be classic.
Can’t wait to listen to the rest of this series.

The weaving of the separate store lines is expertly done. The characters come alive in my mind.

This is an amazing set of books! The characters are wonderful and so colorful. The story is so detailed and keeps you wanting more! Highly recommend

This is a great series with complex world-building and diverse cast of characters! The narration by Travis Baldree is absolutely amazing and I’m looking forward to the next installment!

Jace and Narine finally get it on!

This book in the series takes us to the habitat of the Seers who are similar to Oracles in ancient Greco-roman mythology, where they can glimpse paths in the future but cannot predict it. They are also protected by dwarfs. As with past books, there are multiple plot arcs occurring in parallel to the primary one with the MCs. There are still battles of the mages to determine dominance. This continues to be a bit difficult to keep up with these mage battle groups and their gods but it's becomes less of a burden as the mages are whittled down.

As mentioned in the headline, Jace and Nardine form a more romantic relationship but others in the fellowship also begin to pair up to form personal relationships. This improves the likeability and interest of the main characters which, in turn, improves the continued main story arc.

There is romance, betrayals, court politics, new friendships and bloody and brutal battles. What's not to like?

Travis Baldree performance is as skillful as ever.

interesting story, good performance. looking forward to the next book. good job with weaving the paths of each character together.

Story, characters and world is well built. Alot of action, humor and some romance. Its a good book. The only thing that is a bit annoying is that it skip around alot with a bit too many characters.

Edit score after book 5. Book 1-3 had 4 stats. Book 4 3 stars. Book 5 just sucked and I'm done with the series. The annoying bits just increase after every book.

3 books in 1 and worth every penny!

Really enjoyed these stories! It’s always a concern that 30hrs May be ‘too long’ if it’s a bit mediocre, but thankfully this turned out to be great and loved every minute. Just the right balance of action, adventure, background, character development... everything you could wish for in a book and more! I can’t wait to find out what happens next and was sorely disappointed to come to the end!
Travis does a great job as storyteller and really brings all the characters to life. Great voices, great pacing and really brings the action and intensity out.
Loved it!

Very well written and narrated . The characters and world building get better and more intense the further into the series you get . It has action and comedy and most of the things you’d want for a good book . I look forward to finding more books by the same author

The voice work for characters is fantastic and I loved how the relationships developed. We're really taken from the start and thrown into all kinda of hard situations and experiences.

I loved the relationship between Jace and Narine as their banter is hilarious. I also really like Brogan an Blythe. So good.

This is a wonderfully long story with characters that will make you curse, love and laugh a lot.

Thank you for the journey, and I want more!

Both the story and narration grip you and take you to a journey with them.

Action-packed, immersive, and intriguing, this series is exciting from start to finish! I highly recommend!

Took a while to get into but then really enjoyed the story.looking forward to the next book

I thoroughly enjoyed this box set of three books. J. Kohanek is a master of story telling and Travis Baldree was excellent in narrating the story.
I'm off to book 4 now.
Enjoy

Needs to be a film.Fantastic

I thoroughly enjoyed this adventure and look forward to everything else the author has written.He paints a great picture of a world with fascinating characters their interaction and great storytelling.

Came for travis stayed for the story

An epic fantasy with love ,hate and war.

I loved this first set of 3 books about wizards and humans joining in an adventure. I got teary when the brave dog was killed while trying to protect the group.Great narration by Travis Baldree. Exceiient array of voices for so many different characters..
Jeffrey Kohanek has a new fan. I look forward to listening to the rest of this series and future books