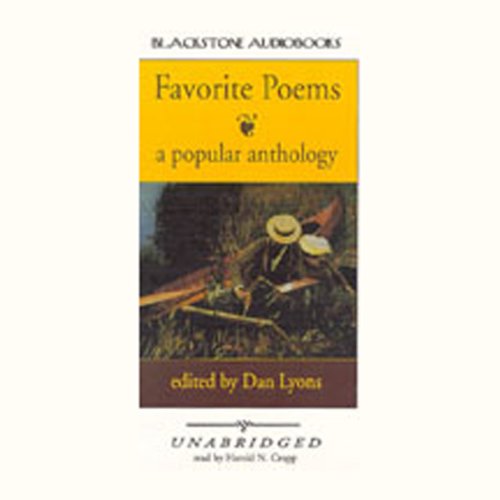 A former English teacher at Seattle University, Lyons enhanced his love for poetry by studying the great classical poets in the original Greek and Latin. This anthology is not just for connoisseurs. It is for everyone who enjoys poetry.
The book is confined almost entirely to poems that rhyme. Of all our books, the fun and inspiration in these pages will probably boost your morale the most, and provide spiritual enrichment to your life. The poems are thrilling, as well as entertaining. Tolle et lege: listen and enjoy!
©1995 by Dan L. Lyons (P)1995 by Blackstone Audiobooks
Collections & Anthologies
Show More Show Less

What listeners say about Favorite Poems

Depends on what you're looking for.

It's ironic that the editor states in the epilogue that every culture has created poetry, since he includes poems only by Western authors. Nearly all of the poems in this book are of a religious nature, or are put into a religious context by the editor. The volume omits Robert Frost, Maya Angelou, e. e. cummings and many other notable others in favor of some very obscure poets. It includes only four sonnets from Shakespeare, while it has eight from Gerard Manley Hopkins (a 19th century priest and poet whose talent the editor claims "may even exceed that of the Bard of Avon.") Additionally, while the editor proudly claims that nearly all the poems in the volume rhyme, he is willing to stretch the definition of poetry to include sermons, hymns, and Christmas carols.
The editor uses the poems as an opportunity to comment on the ills of modern society, the evils of Rap music, and the foolishness certain scientific ideas. (He goes so far as to include a poem of his own entitled "Why scientists who teach atheistic evolution make me wonder.")
If you want a collection of Christian themed poems, this book is for you; if you're looking for a broader selection, keep shopping.

Prefer poems without point of view

I like much of the poetry included, but wish the description had included that there is editorial commentary from a conservative Christian point of view. I prefer to hear poetry with no more commentary than might be found in a general anthology such as Top 500 poems.

I absolutely love this selection. I've experienced the listening as a transcendental meditation; being taken to alternate places including childhood and other "remote" locations.

I'm hesitant to go back to just reading poetry after this wonderful experience. Thanks for offering the selection.