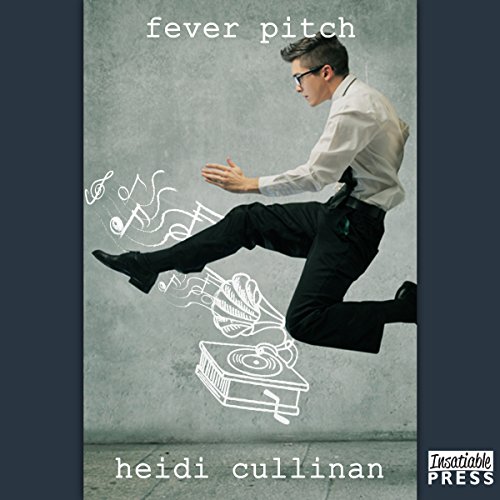 Sometimes you have to play love by ear.

Aaron Seavers is a pathetic mess, and he knows it. He lives in terror of incurring his father's wrath and disappointing his mother, and he can't stop dithering about where to go to college - with fall term only weeks away. Ditched by a friend at a miserable summer farewell party, all he can do is get drunk in the laundry room and regret he was ever born. Until a geeky-cute classmate lifts his spirits, leaving him confident of two things: his sexual orientation and where he's headed to school.

Giles Mulder can't wait to get the hell out of Oak Grove, Minnesota, and off to college, where he plans to play his violin and figure out what he wants to be when he grows up. But when Aaron appears on campus, memories of hometown hazing threaten what he'd hoped would be his haven. As the semester wears on, their attraction crescendos from double cautious to a rich, swelling chord. But if more than one set of controlling parents have their way, the music of their love could come to a shattering end.

It would be difficult for this Book 2 to eclipse Book 1 about Walter and Kelly, but it did. Bring a box of Kleenex, you'll need it plenty. Heidi is a dream writer for this stuff. One can only hope that she continues to write and write and write. Thanks Heidi!! Thank you too Iggy! Wonderful narration, another indispensable layer to the sweet delicious dessert that this book is.

this book was everything!!!

I didn't think it could be better than the last one but it was! I loved seeing characters you loved from the first book. I loved the HEA but that there were real hurdles the people you cared about had to jump over to get there. it was raw, it was beautiful. worth every penny

I think Iggy Toma did a better job narrating this than Love Lessons.... Or maybe I've just gotten used to him.

This has heaps of angst, the kind you'd expect from a CW teen drama. Almost everyone has some drama going on with them. And there are parent issues up the wazoo with Aaron and Elijah winning the crappiest parents award.

If you like your MM romance with a lot of teen angst, a big cast of side characters, musical jargon, and if you wanted more of Walter and Kelly from the first book, then you'll love this. Narration was really good. It was easy to distinguish which character was speaking because they're given distinct voices and the paint was good. Not too fast or slow.

OMG, what a great listen. Frequently in my audiobook reviews I praise the narrator for bring the story to a new level. Although the narrator did a wonderful job, in this case the book eclipsed the narrator. I do not believe this is not a stand alone book, you have to read/listen to the first book in order to really enjoy this one. What a great ride with Aaron and Giles. Their story was a roller coaster ride of emotion, angst, horror, joy and down right whooping fun. Put it this way, while reading I rented Pitch Perfect and downloaded Titanium; a movie and a song I had never heard before, but now love. It is hard to put into words what the story (really two stories) is about. The first half of this book made me want to tear my hair out with all the misunderstandings and angst. Then it morphed into a coming of age/coming out story that tore at my heart. Then it morphed into the beginning of a second story with another couple. And all through it, Walter and Kelly, from the 1st book played prominent roles. Especially Walter, who I now want to clone as the gay big brother for all young gay men. It is always great to see a beloved couple throughout a series; I love the way Ms. Cullinan did this. There is more drama in this one than the first book and I cannot wait for the third book to continue Baz and Elijah's story. Also, as a parent, I love that there are evil parents and good parents; just like real life. All and all, this is a re-listen and now one of my favorite series. Definitely worth a credit.

This seems like a lot of fluff and to some extent the friends to lovers story is a bit fluffy as the two get together but hard times are to come. Great support from friends and one family. The MC's rich evil 'father' becomes such a real character I felt scared in my reading when it came to the final face off between recently liberated gay son and his boyfriend. There are surprising intwining stories with some of the characters and the ending is a bang up job with plenty of edge of your seat action and not just one but two Disney style Happily Ever Afters.

That’s what I said when I found out Love Lesson’s was to finally have it’s sequel!

I knew it had been planned for a long time and was super excited to finally read it! Let me tell you that I was NOT disappointed!

This is another long book of the new adult variety, in keeping with the Love Lesson’s theme. Fever Pitch takes place at another university in the mid-west, small and liberal arts oriented – but no gay swans, mores the pity.

Aaron and Giles actually attended high school together their senior year. It is in their last days there that Aaron begins to give in to his cravings for male romance and Giles is happy to help him explore this side of his personality. Unfortunately, both boys are really quite scarred from past experiences and the relationship is over before it really begins, leaving Aaron tentatively in lust/love and Giles really pissed off.

Aaron follow Giles to St Timothy’s University, mostly in stalker fashion, and over the course of many months they eventually forge a friendship through their mutual love for music.

During this bonding process we get to see our friends Walter and Kelly again – woot! Walter ends up helping Aaron deal with his new feelings and helps him to “get his man”.

Once the boys get together the drama doesn’t stop. There are other crazy parents involved and other sad gay boys to be saved. We see parents who can help save lives and those who set out to ruin them. There is lots and lots of music being played, composed and sung. And finally there is a wedding. Sigh. Walter and Kelly get married in what has to be my all time favorite gay wedding to date.

I just loved these two books so much! This second book is even stronger than the first. The side issues are more serious and the tragedies more tragic. If I’m being honest… the sex is hotter too, but don’t tell that to Walter or Kelly.

I loved how the book furthers the lives of people we met in book one, but if you didn’t read the first book, no worries, this stands on its own quite nicely.

Again Heidi has given us a love story interwoven with some serious, coming of age issues and the result is a rich tale, full of well developed characters and satisfying story lines.


Audio
Iggy Toma does another amazing job with this sequel to Love Lessons. Again he gives us so much emotion and does such a nice job with the voicing that you can’t help but be captivated. I really appreciated his ability to just become fully engaged in the story and let the raw feelings ooze through his voice so that the listener feels like she is right there with Giles and Aaron, feeling their joy and pain.

I love this series. Love the totally fairy-tale feel goods of how every broken person gets help. Love how Walter and Kelly take Aaron under their wings. Love how everyone rallies around everyone. And the MCs were too cute.

Couldn’t get any better!

Wow, I didn’t think the first book could be outdone, but Heidi knows how to raise the bar. I loved the story of two new characters learning about life and love, as well as the many struggles that comes along with starting college. Bringing Walter and Kelley in as the ‘grown ups’ illustrated how love can mature the heart - even if still young. This book hit home for me on many fronts. Heidi has risen to become one of my favorite authors. Iggy Toma is a brilliant narrator and brings the story to life with ease. Fever Pitch will be one of my all-time favs.

Well that was interesting. At first I was having a great time with it because I went to undergrad in Saint Paul, Minnesota so some of the college stuff rang true. Of course my school was totally NOT Saint Timothy - wow - that was pretty out there. It got kinda over the top for me between all the performing artists and the supportive professors and the wakadoo family stuff. It was sweet, and I loved the sentiment of standing up for people who need a helping hand, that part worked for me.

I'll admit that, while I did enjoy the first book in the series, I hadn't planned to continue with it (though I did really love Walter). I grabbed the audiobook because it was Iggy Toma and he's so great I figured it would be worth my time and money and it was.

I am really enjoying the series. Many original stories. The narration is great and you feel like you know the characters personally.

I love the writing of this author. The characters draw you in along with the story line. Real empathy of the author with young gay guys and the real problems they face.i was talking to a young student recently and his story was so like one of the characters here that o had to tell him about the book. I told him nOthing is new