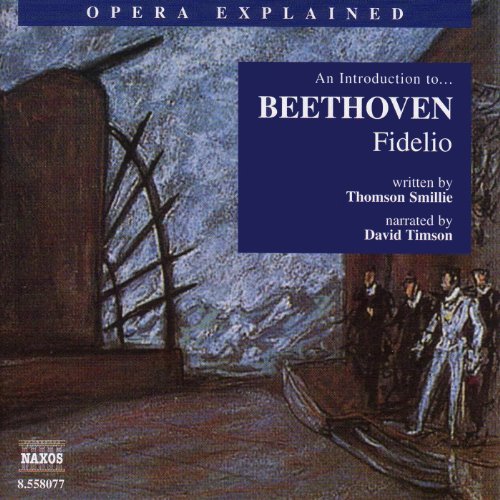 There are few things more beautiful than Beethoven's Fidelio. Unfortunately, most modern listeners are without the context to truly appreciate all the nuances of Beethoven's only opera. The successful series Opera Explained, however, has put together a comprehensive and enlightening production for Fidelio. Veteran narrator, David Timson, introduces each piece of music with an engaging and thoughtful tone, and then listeners are provided samples from the opera. By providing context and insight into Beethoven's life, listeners will find a new appreciation for one of the most beautiful operas ever written.

Fidelio is a work like no other. Beethoven’s only opera is about the joy of married love - by a man who never knew that pleasure. It is about heroism by a man who was often mean and petty in his human relations; it is about freedom by a man who was a prisoner of his own deafness; and ultimately it is about joy by a man who experienced precious little of it. Maybe there is a divine logic to that: feelings the artist could not experience but could express find their noblest manifestation in music of overwhelming power and majesty.

The most popular operas from the early 19th century are Italian - Rossini, Donizetti, Verdi. We know that Fidelio is important because it was Beethoven’s only opera, but it is not, on the face of it, as much fun as The Barber of Seville, or Don Pasquale. This is why Thomson Smillie’s introduction is so useful. He places the plot and the music against the background of Beethoven’s own turbulent life and suddenly we realise the importance and the uplifting nature of the themes he deals with - starting with fidelity, the name of the opera itself. This is a riveting preparation for seeing or hearing the whole opera.

What listeners say about Fidelio

Beethoven's only opera in all its glory

This is an outstanding title in the "Opera Explained" series, one free from a lot of extraneous detail and unneccessary introduction. We get right into the opera almost at once. And what an opera it is, containing as it does a political message, a paean to the joys of married love, and a score so demanding one wonders at the endurance of its performers. While the plot appears at first glance to be somewhat commonplace, it nonetheless shows the triumph of good over evil, justice over tyrrany, and hope over despair.

Furtwängler praised the opera, saying its political message and music "will always represent an appeal to conscience." But perhaps just as much, it is a monument to its composer's own statement: "Strength is the morality of the man who stands out from the rest, and it is mine."

Even if you're not a great fan of opera, if you love Beethoven, you're likely to enjoy this brief look at the incredible work he swore would win him "a martyr's crown" for his trouble. It is nothing less than a wonder to behold.