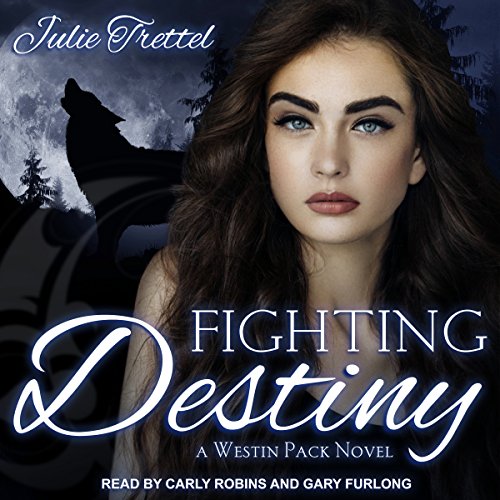 What happens when you choose not to accept fate? Elise Westin is obsessed with one thing: avoid Patrick O'Connell at all costs. She knows the handsome foreigner is her one true mate. She knows they are destined to be together. Knowing it doesn't stop her from fighting it the only way she knows how . . . run and hide. But hiding from him can only last so long.

Fate, with the help of her family, forces her to come face to face with him. Will she be able to confront her own fears and accept love? Or will she lose it all by fighting her own destiny?

Patrick O'Connell has given up everything: banished from his own pack, living in a foreign territory. He's chasing a dream that he was raised to believe doesn't exist. But he knows he's found his one true mate. She's real. One whiff of the dark-haired beauty changes the path of his life forever. With nothing else to lose, he won't stop until he finds her again. But Elise doesn't want to be found. Can he win the heart of his elusive mate? Can Patrick break down Elise's barrier of fears to find their happily ever after? Contains mature themes.

What listeners say about Fighting Destiny

not that bad and not that good

Stories about selfish princesses are not my thing. Another pet peeve is a book where the main character is trying to self sacrifice just for the sake of it. They are so focused on their martyrdom they do not clue into the fact they are doing more harm to the greater good. It may get better but I could not finish.

Just like the first book I absolutely loved this book too! Wish there was more to listen too.

This book continues where the first left off. Characters were well thought out.. Love how it refers back to Kyle and Kelsey as well as the other siblings and parents. (spoiler alert) Kelsey is more powerful in this book and Kyle says he knows she's been practicing. The narrators were great. Love the Irish lilt in male character's voice. just a great book all around and steamy love scenes too.

Love me some Patrick!

Book 2 was interesting to me. On one hand there is Elise that is suppose to be a confident Westin from the powerful Westin Pack, but instead she acts whiney and weak. Then there's Patrick, the shifter that feels Elise is her one true mate and nothing is going to stop him from letting her know that, although she already does know it.

This story was not as exciting as book 1 and 3 for me, but overall I still enjoyed it, because I like to hear the back story of all the main characters. I am really enjoying the Westin Pack and the closeness of their family.

Great story for this pair. I continue to enjoy the series and can’t wait for the next one!

another wonderful installment to this series

After reading some of the other reviews, I wasn't sure if I'd like this book, but I honestly don't understand why those other listeners didn't like the book. I loved it and can't wait to hear the next one. I highly recommend.

Unlike the first book, this one centers on a heroine who is less than intelligent. She treats her true mate as one would expect her to treat a possible boyfriend that is not particularly compelling. By contrast the hero is all in and very appealing. This book is written around a false problem wholly created in the heroine’s mind. I’m half way through the book and can’t decide if I care to finish it. How can any wolf in this book universe not understand the nature of a true mate? You would think that she has never seen or had true mates explained to her. She is presented with the dream of every shifter and can’t decide if she wants it or not. Really??? That is beyond annoying.

I love PNR series and Mrs. Trettel is A Wonder!

This author is new to me and I am so grateful for audible suggesting her. This author has such a gift with weaving real situations with the paranormal. I for one do believe there is much we as “humans” don’t know and this author makes her take very believable. Already on the third book in this 5-Book series, I am a new fan. This series is great! The narrators are like great actors, changing accents, and personalities. Be prepared to laugh, cry, take your device with you if handheld, and form attachments to the characters.

I enjoyed this book. It is in a series and I don't think this book was as good as the 1st or 3rd but it is an easy book to listen too and is quite enjoyable, if your looking for a book that is an easy listen. I will continue to listen to this series as I'm enjoying the story. I would recommend you listen to the in order as they have little quirks you can follow along with.