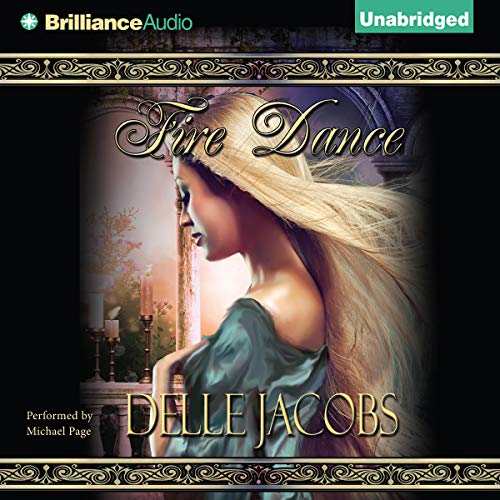 Lay siege…. Sent to execute the king’s cryptic command to destroy an evil sorcerer, capture his castle, and take his daughter to wife, Alain De Crency expects a hard siege. Instead, the castle is undefended, the daughter vanished, and the sorcerer dead, shrouded in a purple cloak. Alain lays claim to the cloak and searches for the missing daughter. But soon he faces a new dilemma: How can he marry the missing lady when a beautiful, evasive servant has captured his desire?

To her heart…. Melisande’s only hope to save her people is the Norman knight sent by the king. But that hope may be dashed when her evil father’s magic reaches beyond the grave: The poisonous dye of the cloak is killing Alain, just as it had slain her mother. To save Alain from the cloak’s enthralling spell, Melisande disguises herself as the servant Edyt and walks a fine line between death and desire, for if her terrible secrets are exposed, she’ll be executed by the very man who has stolen her heart.

What listeners say about Fire Dance

The story was well written and it did not confuse me, but I couldn't agree with the logic. It seemed like the main female character was creating most of the trouble and yet she "didn't want trouble". If the main female character wanted the main male character to stay and govern and help her people, why did she allow him to be poisoned by arsenic through over 3/4ths of the book and then she gets upset when he thinks she was the one who did it. She didn't want to marry him so she hid herself with the servants, but she kept doing things to come to his attention. That's the problem with a lot of historical romances. If they are not written with some style and care, they tend to portray the female character as a dramatic ditz with very poor common sense and become bland, overdone, or just annoying.

Fire Dance is a somewhat silly historical romance - with an emphasis on the romance since the history part is daft. Admittedly, I only made it half way through the Audible narration before the constant eye rolling was about to cause me vision loss. The funny thing is - I don't mind a bit of supernatural elements or alternate universe. But seriously, the plot has to at least be believable and with some modicum of attempt to put history in the historical - or just make it a straight fantasy.

Story: Melisande's sorcerer/lord father has died and the Normans are at the gate. She decides to impersonate a maid in order to avoid a forced marriage to the handsome and just knight Alain de Crency. But Alain needs to wed the daughter of the lord - even as he pursues the beautiful maid - little knowing that her hearsay could destroy all he is building.

So yes, this is a romance and if you don't look too closely at it, you may enjoy it. The dialogue, characters, etc. are all very modernized and clearly we have clean peasant (and knight) syndrome. As well, actions that should get characters beaten, raped, or murdered never seem to happen. About half way through the Audible version of this, I'd had enough with the stupidity of both Alain and Melisande. He was borderline incompetent as a knight (ok, seriously, how hard is it to find one girl of a certain age and description - knowing she is hiding from him - and not figure out it is the woman without calluses, well educated, and who talks back to him?). And her actions were so patently stupid as to wonder how she put on a dress...er kirtle...in the morning.

I never even made it to the sorcery part, the romance was too wince worthy. I listened to the Audible version and the male narrator was perhaps a bit too gruff for the part.

Not as good as Loki's Daughter

This was just OK..I read Loki's Daughter by the same author so I thought maybe this would be as good. The story line was very convoluted ......too many strange twists and stupid misunderstandings, Just tell him that his shroud is poison already!!! Chapter and chapter of her keeping things from him even when he's proven to be a good guy. Why would you not at least try to explain that it is what is making him sick??? So ridiculous!

Would you try another book from Delle Jacobs and/or Michael Page?

Yes I always try more than once

The whole story just seamed to blend together

Narrator ruins it for me!

What would have made Fire Dance better?

He should work on his delivery. He reads very well and has a nice voice but he somehow manages to make the hero sound like a pompous a$$ and the heroine like a weak ninny. He completely fails to establish the hero's sense of humor or kindness. Don't even get me started on the heroin's voice!

I was a bit dissapointed. This might have been a good book had I been reading the paperback version.

What other book might you compare Fire Dance to and why?

Who would you have cast as narrator instead of Michael Page?

Was Fire Dance worth the listening time?

Yes...though I made time to read more because the performance was distracting.

Mr. Page chose to perform the narration-particularly the dialogue- in a manner than brings to mind parodies of Shakespearean actors past their prime or the trilling music hall performer who thought themselves the equal of Sir Henry Irving or Edward Gordon Craig. The performance was distracting and reinforced my resolve to remember to sample the audio before I buy.

loved this book and story! it was a pretty sad reality and a nice ending. I also loved the little bit of history.

The story started out good, but as you read it, the plot unfolded and than dragged on and on. The mystery of the nightmares could not keep me interested till the end.

I really enjoyed this book.. I liked the narrator reading. The story was entertaining.. For me I like a little dread to make the story more believable but not to much that make it depressing. I need a good happy ending as well. I found this book had a great balance.

I am glad I picked this one up. I wasn't sure at first about the narrator but I was quickly drawn into the story and finished it in one day. I'll be checking out more titles from this author.

I enjoyed the story line but the narration was not that good. When the narrator spoke in his normal voice it was very good on the ear. But when he portrayed the hero and heroine, that was not so good. The hero sounded like an old man and the heroine sounded like a woman who smoked a pack of cigarettes a day. They only voice he did that I enjoyed was the Kings. It’s a well written story. And I did enjoy most of it.