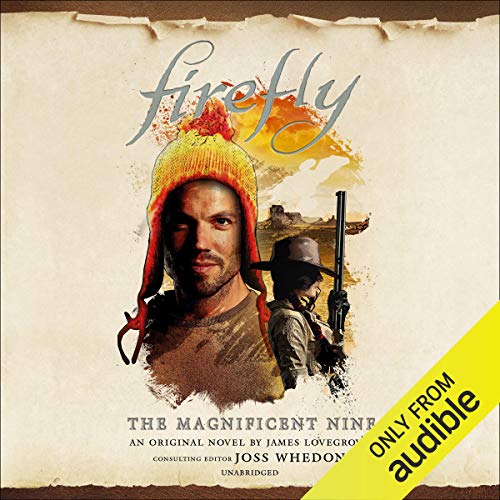 The second original novel from the much-missed Space Western Firefly, produced with Joss Whedon as consulting editor, set between the TV series and the movie Serenity

A cosmic cry for help

Captain Mal Reynolds is in a fix. He’d like nothing more than to find honest smuggling work that stays under the Alliance’s radar and keeps the good ship Serenity in the sky. But when an old flame of Jayne Cobb’s sends a desperate plea across the galaxy, his crew has other ideas.

On the arid, far-flung world of Thetis, the terrifying Elias Vandal is threatening to overrun the town of Coogan’s Bluff with his trigger-happy army. He wants control of the only thing standing between its people and dustbowl ruin: their water supply.

When the crew land at the hardscrabble desert outpost, they discover two things: a savage outlaw gang who will stop at nothing to get what they want, and that Jayne’s former girlfriend, Temperance, is single-handedly raising a teenage daughter, born less than a year after she and Jayne parted ways. A daughter by the name of Jane McCloud....

A must for browncoat fans

This book reads exactly like a Firefly episode. The narrator doesn't try to sound like the actors with the dialogue; but differentiates the voices enough that allows you to picture them in your head. The only thing I find distracting is that the author seems to have a checklist of saying or reminders from the TV series. Otherwise the story is very enjoyable for anyone who enjoyed and misses the Firefly 'Verse.

Another shiny addition to the 'verse

So, I really enjoyed the first book in this series, this one slightly less so. I expected a little more backstory on Jayne than we got here, and there were some of what I thought were poor choices in anachronisms referenced here and there throughout the book.
All in all though, I did enjoy it, and I'm looking forward to the next one.

I am really liking the series. Captured the voice of the characters. I am going to order the next one when it becomes available.

Welcome back to the ‘Verse

better than the 1st

I hope the make more, to fill in the gap between the show and the movie. the narrator does great. but having the original cast read it would be awesome!

This was another arrive Firefly book. I highly recommend it to all fans of the series

loved it - so easy to visualize Nate and Gina and Ron Glass, Morena, Jewel, Alan and Adam in their roles. Thank you for bringing Firefly back!

Welcome back to the 'verse

Excellently written, spectacularly narrated! You can here Mal talking, and feel Jayne's distress. plus, I enjoy learning Jayne's backstory - who he is ... inside, and what goes through his mind. This could easily been episode 2 of season 2. Oh, and see if you don't get choked up by the last five minutes of the story. This is one Gorram good book.

Decent paced and full of life. A must read for Firefly fans. Can't wait to read the next

Lots of fun in the Firefly vein. More exposition than an hour of TV could ever give, so it’s a little like a mini series version of a single episode.

If you’re not already sold on Firefly, watch the series first. This book appears somewhere between the series and the Serenity film.

A must for Firefly lovers..

This book was an incredible ride with the people we know and love. The story no doubt has been done before in similar ways, but this didn't detract from the audio or text story presented here.. the character building is solid, and each Firefly character is well voiced from the start. Bittersweet that it's ended in mainstream media, but there is legs for Firefly/Serenity to continue in books if the calibre is this high. thank you.

The fly, flying once again!

A much missed show, brought to life every well indeed!

A third one please, perhaps leading us up to the film. would make these a very good trilogy!

Please make more! This and the previous book are both superb in story and in performance. The way the voice actor finely recreates each memorable character's subtle speech styles is so immersive. These books are by far the most shiny thing 'Firefly' since it was on the screen.

The narrator was excellent as Mal Reynolds, he sounded just like Nathan Fillion. He wasn't perfect however, for instance the 'Janes' sounded too much alike, that said, I would have given him 4.5 if I could. Apart from the comment below which I suggest you probably shouldn't read and which cost it a point, the story was actually really good and i would recommend it.

SPOILER ALERT!!
The so called twist in the story was the worst I have ever read. It was so blatantly obvious from the beginning what the outcome was going to be regarding Jane 2, the story would actually have been better without the twist.

That captures the essence and humour of the TV show, set shortly before the feature film

This story has fed my empty spot where Serenity was, and I waiting for the next one.

I enjoyed the story and the performance, easily following along with the characters we've grown to know through the series. River was a little less mysterious perhaps but she fit in well and I was happy to accept the variation from my memory of her.