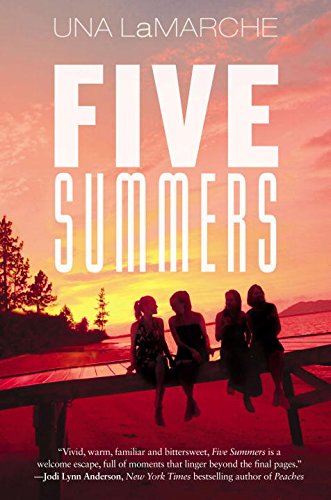 Bittersweet, funny, and achingly honest, Five Summers is a story of friendship, love, and growing up that is perfect for fans of Ann Brashare's The Sisterhood of the Traveling Pants and Judy Blume's Summer Sisters.

Emma, Skylar, Jo, and Maddie have all come back to camp for a weekend of tipsy canoe trips to the island, midnight skinny-dipping in the lake, and an epic game of capture the flag - boys versus girls. But the weekend isn't quite as sunwashed as they'd imagined as the memories come flooding back.

The summer we were nine: Emma was branded "Skylar's friend Emma" by the infamous Adam Loring.

The summer we were 10: Maddie realized she was too far into her lies to think about telling the truth.

The summer we were 11: Johanna totally freaked out during her first game of spin the bottle.

The summer we were 12: Skylar's love letters from her boyfriend back home were exciting to all of us - except Skylar.

Our last summer together: Emma and Adam almost kissed. Jo found out Maddie's secret. Skylar did something unthinkable...and whether we knew it then or not, five summers of friendship began to fall apart.

A young adult book with a friendship story that will last long after the last s'more is gone.

"Vivid, warm, familiar and bittersweet, Five Summers is a welcome escape, full of moments that linger beyond the final pages." (Jodi Lynn Anderson, author of the New York Times best seller Peaches)
"LaMarche has skillfully bottled the summer camp experience, right down to bug juice and Capture the Flag, into a lighthearted summer read." ( School Library Journal)
"LaMarche manages no small feat in drawing four distinct teenage girl characters, and even her minor characters are individualized and well fleshed-out." ( VOYA)

What listeners say about Five Summers

Like I'm back at camp that I went to for 11yrs

Where does Five Summers rank among all the audiobooks you’ve listened to so far?

This is in my top 10 favorites.

The sights, smells, flavors of camp are all there. The songs. The silly names and favorite things and every bit of friendship that one gains through the experiences there. I WAS there again. I was a camper and counselor for five years and six years, respectively, and this was like going home. Thank you. thank you thank you thank you.

Which character – as performed by Abigail Revasch – was your favorite?

Skye made such an incredible character arc that I wanted to hug her at the end. I really want Jo to have her own adventures now, and I want to read about them. (I did think that Jo would have known ALL the songs and games and everything, though with her dad being the director, so the fact that she didn't know everything about camp surprised me.)

You can't go back, but you can move forward.

Hey, author. If you read this, please know that you and I could have worked together at the same camp--we seem to have the same experiences. I'm mentally sending you a friendship bracelet (along with a boys' capture the flag memento.) :)