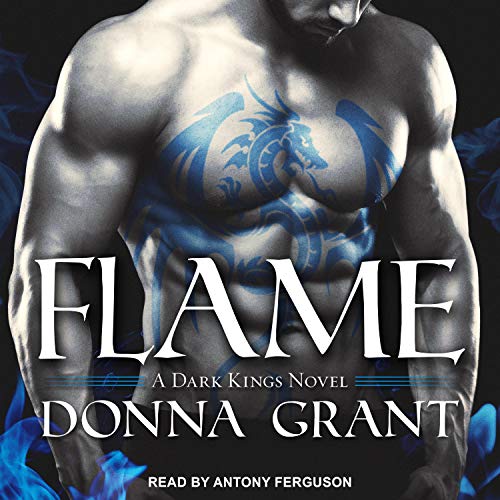 If she believed in destiny, she would believe they were meant for each other.

But that fire was put out long ago....

Living among the Dragon Kings, Cain has spent lifetimes learning to distrust both mortals and Fae. He is a warrior born - and every instinct demands that he fight to keep his own kind safe. But when a fringe member of the Dark Fae contacts the Kings with an urgent warning, Cain is torn for the first time. How can he trust this beautiful creature when resisting his primal attraction to her is battle enough?

Noreen is horrified by what her kind and the malevolent Others are planning for the Dragon Kings. Dark Fae or not, there are lines she will not cross - even if it means risking her life. But she never imagined that she would risk her heart until she meets Cain. She wants him with a soul-deep desire that frightens her...and endangers them both. Is saying goodbye to everything Noreen has ever known worth a love that will span time and realms?

What listeners say about Flame

To hot to handle

One of the most amazing books I have ever read. It was so heart warming, gut wrenching, and amazingly beautiful. I can’t wait for Inferno!!!

This ARC was received through both NetGalley and from Donna Grant’s ARC Angles for an honest review, any and all opinions are strictly my own and no way reflect the opinions of the author or the publisher.

This rollercoaster of ride begins with a Dark Fae, Noreen, sending a warning email to Dreagan which is read by Cain. After meeting Noreen, Cain has to hide her from the Others which becomes problematic since she is being tracked. Once she is safe and the beans begin to spill about the Others, other revelations begin coming to light.

The couple in this book are great, but the back-story bombs are the best. So many story arcs are tied up or a few more puzzle pieces are added so you can see more of the picture. All the back stabbing and double crosses that you didn’t see coming… it was hard not to get whip-lash. For those who familiar with the Dark World. Rhi’s DK has not been officially named yet…. BUT you do get to learn all about the Others, the fate of those who fell during the battle at the Light Castle, why humans were brought to this realm and so much more. It is a must read. Buckle up and enjoy the read.

I tried to listen to the first book in this series and just couldn't get into it at all despite my best efforts. I went into this one with an open mind and am glad I did!

This was a really enjoyable story with solid characters. Having not read any of the previous books I was able to follow the story with ease.

My ABSOLUTE favorite so far!!!

1st let me say that this was sent to me as an ARC from the author for an honest opinion.
That being said.....

Anyone who's followed DG's Dark series has been anxiously awaiting this one!!
So many questions throughout the series are answered but of course she has saved the best for next.
This is Cain and Noreen's story and I couldn't be happier with the direction that DG took this story in!!
Cain is the Ultimate strong silent type with a heart of gold.
Noreen is the Ultimate enemy, Dark fae and one of the Others.
Cain is sent to investigate a suspicious email and finds Noreen who says she's ready to flip sides in the war.
The attraction between the two is almost instantaneous and I was a little surprised by how quickly I WAS ROOTING FOR THE ENEMY!! As this story unfolded I found myself back in one of my favorite places to be as a reader..I laughed, cried and screamed all the way through this!! Although Cain and Noreen have their HEA this Arc is far from over and I can't wait for the Ultimate Battle to begin!!
(Note: Although this can be read alone I feel it's only fair to say that afterwards you WILL definitely want to go back to the beginning and get caught up in this AWESOME world!!)

it is so good to know that the dragons are going to get their revenge soon. Not yet but soon . Donna Grant has captured my love of all things mystical and kept me going through all her books ... many with cross over characters . can't wait for more .

These are yes best books I have ever read. Can't wait for Constantine to find his mate!

Great, gives you just enough to make you crazy until next book comes out in Aug.

I didn't wasnt it to end!

I absolutely loved it! I am now desperate for the next chapter in the story! Who is Con's Mate? For that matter who is Rhi's Mate? I can't wait for the next book!

I want more. Can't wait for the next book

want the next book now but we have to wait until August. love Donna Grant


Another great Dark Kings book. This one was about Cain and Noreen who fell in love and everything went to he!!. This was completely different than the others. I mean, for a minute there I was wondering if the Kings were going to kill Noreen, like they did Nala, Ulrik’s first love, thousands and thousands of years ago.

And still we had to put up with Usaeil AGAIN. And another evil witch that wanted earth as her own, Moreann. What a twosome! Since the next book is Con’s book, and that’s supposed to be the last book, it’ll all come to a head then. I don’t know what I’ll do without the Dragon Kings. ☹

Of course, there was explicit sex and the F-bomb was used 13 times.

As to the narration: What can I say? I think giving Antony Ferguson 2 stars is being generous. He does a woman’s voice so bad; he has in all 17 books. And he pretty much reads without emotions. The only thing he has ever done is yell when it’s called for, that’s it. How anyone could give him 4 or 5 stars is beyond me. The ONLY reason I listen to him is because I HAVE to. I used to be able to read DG’s books but I can’t anymore AND it stinks when I have to listen to a bad narrator. I do prefer male narrators but not AF. Should have gotten Tim Campbell or Napoleon Ryan or Jay Snyder or Scott Brick or Robert Petkoff or Luke Daniels or Jonathan Keeble or Alex Wyndham or even a woman who can do a mans voice: Kate Rudd, Kirsten Potter, Stevie Zimmerman or or or. A good narrator, male or female.

This audio book was amazing. I have loved every single book in The Dark King Series and this book was so damn good!!
The narrator was ok, I didn't particularly enjoy how he performed the female voices, but his male voices were on point.... that Scottish brogue is just so perfect.
I think in regards to who Rhi's king is was fairly evident in this book, and I hope I'm guessing correctly but I guess I'll just have to wait and see.