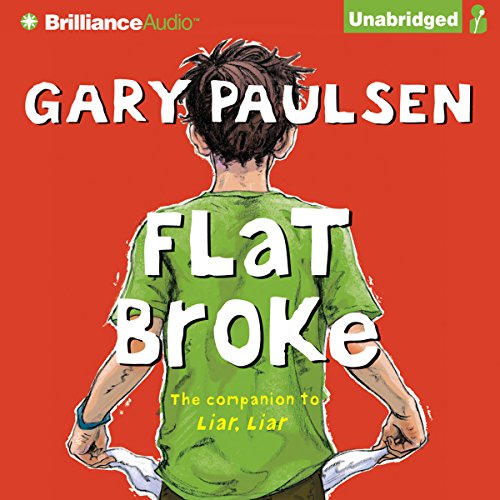 As a punishment for lying, Kevin has lost his allowance. He doesn’t lie now, but he’s broke. He’s got to find a way to make money. Lots of it, so he can impress Tina Zabinski, the World’s Most Beautiful Girl, and ask her on a date. So Kevin gets creative - and his life becomes a financial comedy of errors. Does he really have what it takes to get filthy rich at age fourteen?

In Gary Paulsen’s hilarious follow-up to Liar, Liar, Kevin’s schemes lead him into situations that are sweet, some that are sticky, and some that are downright stinky.

What listeners say about Flat Broke

It is a good book. Nice Story

Would you try another book from Gary Paulsen and/or Joshua Swanson?

Did Flat Broke inspire you to do anything?

If you could sum up Flat Broke in three words, what would they be?

Shows differences between good and bad.

What other book might you compare Flat Broke to and why?

Excellent narration. Good book. This has its own identity.

Have you listened to any of Joshua Swanson???s other performances before? How does this one compare?

Uh…So FIVE of a kind beats FOUR of a kind?

Kevin Spencer is 14 going on 35 and the funniest kid character you want to meet. I am a 50+ year old female but thought this book was Laugh Out Loud funny as you hear the enterprising young Kevin and his innocent but adult savvy take on earning an "honest" living. Gary Paulsen is such a witty writer and I plan on reading the rest of The Kevin series. The book brought me back to my own childhood and all the fun dreams that I had at his age. There is nothing like a clever "Young Adult" book to keep you young at heart!

He is the perfect reader for this book. His hysterical voices exactly recreate kids in the teenage years and I though I was listening to my own nieces and nephews instead of an adult.

The more stressed at work that I am - the more juvenile my book selections.

We loved this series. It helped entertain me and the three kids, ages 6, 7 and 11, on our way to school and back each day. Amazing how a book tape can teach a lesson and keep the peace in the car.
I hope there will be more books like this added to the series.