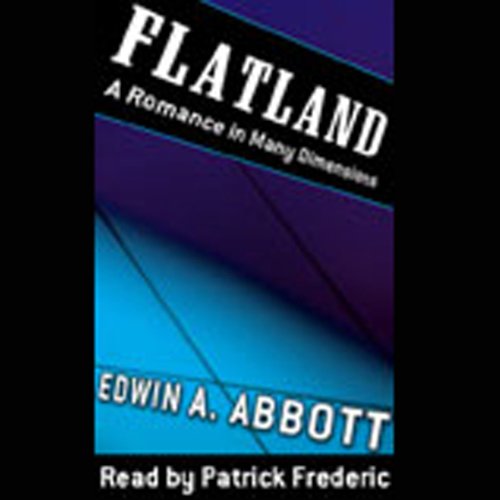 Written by: Edwin A. Abbott
Narrated by: Patrick Frederic
Free with 30-day trial

"Your world has not just four dimensions, but five, fifty, a million, or even an infinity of them!" - A. Square

For more than 100 years, Edwin Abbott's mathematical adventure has charmed and fascinated. Set in a world on one plane, Flatland takes listeners on a strange and wonderful journey. This timeless fantasy tells the story of A. Square, a character who lives in a completely flat world where all the inhabitants are geometric shapes and think their world of length and width is the only world that exists. When Square is whisked away to the Land of Three Dimensions, he shakes up his fellow two-dimensional beings with his notion of a dimension beyond their own.

One of the rare novels about math and philosophy with almost universal appeal, Flatland is simultaneously a brilliant parody of Victorian society and a fictional guide to the concepts of relativity and the multiple dimensions of space.

"The best introduction one can find into the manner of perceiving dimensions." (Isaac Asimov)

What listeners say about Flatland

Loved all the concepts of this book

After hearing dozens of recommendations for this book I sought it out.
I was not dissapointed.

The books concepts and mathematical principles are interesting, educating and suprisingly entertaining. I loved the descriptions of the character's worlds and had no trouble turing my mind around the concepts existing in worlds with different numbers of dimensions.

The story is well told through a character that is easy to believe and ,if not have empathy towards, understand their plight.

The story was over well before I wanted it to but I suppose that only so many concetps may be put forth in a book like this before the author believes he may be overindulging or submitting their readers to a deluge of too many principles.

Highly recommended for those who wish to understand when physicists sometimes claim the existance of other dimensions which we cannot perceive and who wish to know how this can be.

I was amazed that anyone could write a story about a square that would have the same level of suspense as the greatest dramas.

I was more amazed at all of the implicit social and religious commentary that could be crammed into a story without diverting attention from the plot.

Finally, I was supremely amazed that all of this was written over a century ago, while it reads like it was written yesterday... or tomorrow.

From math to philosophy

The mathematical and physical concepts of this book carry an extraordinarily deep philosophical meaning: just as a Flatlander could never imagine what it's like to be 3-dimensional, we too may be unable to perceive a different dimension that is there - like perhaps the dimension spiritual beings live in. This gives me hope that there's much more to it than what we have on Earth, which is wonderful but mortal. I've enjoyed this story enormously, both as a nice funny tale and as an inspiration to cling to when I feel discouraged wondering if life has a meaning...

This book offers one of the best explanations I have ever heard on dimensions. If you are a fantasy writer and want to know the difference between dimensions and universes, get this book. The story itself isn't all that compelling, but it is entertaining enough.

This isn't a science book, this is a work of fiction. It is an excellent work of fiction, too. It provides the reader with a different perspective -- in fact, training the reader how to look at things from a completely different perspective. It also contains very relevant social commentary that can teach us valuable lessons about ourselves. If you're expecting a "science lesson", skip this. It is a work of fiction written in a refreshing style providing a glimpse into things that "may be" or "could be". Keep an open mind!!!

good, but Sphereland is better

I wish there was an audiobook version of Sphereland. Flatland is the classic book on this subject and is quite enjoyable to listen to. But, in my opinion, Sphereland has less discussion of the social structure of flatland and spends more time enlightening the reader about how we can think of four dimensions in our three dimensional world.

An exhaustive allegory for culture and perspective

the performance is very mechanical, but fitting. The thing a seemingly indulgent way to create a culture with echoes of our own. Eventually this pays off. The exposition showing tangible problems in a very abstract setting.

I read this book as a teen in the mid-70s to try to envision multiple dimensions. It is even more relevant today! I would make this a must read for anyone trying to make sense out of anything that has to do with string theory, multiple dimensions, even life and the concepts of hierarchy! A must have for everyone that has teens and those interested in what they cannot just get a grasp of.

Cheerful moments in a thought-provoking book

The narrator seemed to hold his tone as fittingly proud for the words and temperament of our friend, the square.

The section about the IT-speaking 0 dimension seemed, to me, to be an apt critique on the complete omniscience of a God that is all, and knows all, and is only itself seeing itself, so I got a nice chuckle.

All in all, I enjoy the challenge of trying to conceive of dimensions higher than the third, which has been brought to Space by our friend from Flatland.

Flatland is certainly interesting. I love the idea of creatures in multiple dimensions, even if the story is a bit flat. It's really more of an exercise in 2 to 4 dimensional thinking. The story itself is humorous, at least it tries to be, but the narration is not particularly inspiring. If I wasn't interested in geometry, I wouldn't have gotten past the first hour. (I want to try out Flatterland, but no Audible currently exists.)

One of the best books I've listened to...

I read about this some years ago, though I can't remember where. As a religious studies teacher I thought I'd better read it for discussing epistemology in class. I was more than pleasantly surprised. A genuinely compelling story where you can begin to relate to two dimensional characters (a bit like Jackie Collins, then!) and begin to care about them. Hilarious from start to finish. I'm chosing to believe the sexism is sarcastic, rather than simply a product of its age, but it's funny all the same. Really well read, with great feeling. Listen to this. It'll cheer you up!