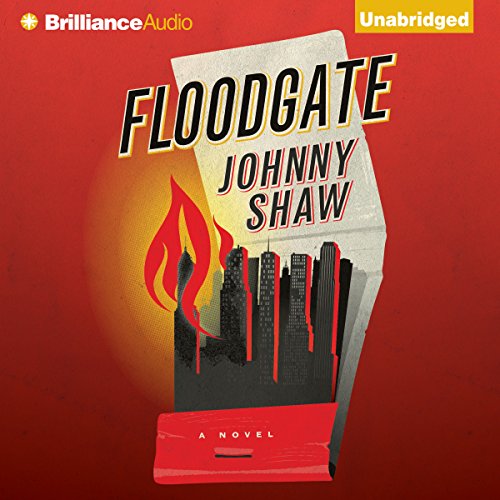 Andy Destra is a mostly honest cop in the most notoriously corrupt and crime-ridden city in America: Auction City. After discovering explosive information that reveals corruption within the highest levels of the police department, Andy is kicked off the force, framed, and disgraced, left to wage a lonely one-man crusade against conspiracies he can't prove.

Andy's investigation plunges him into a blackly comic maelstrom of one-armed gang members, slick pickpockets, criminal syndicates, hired mercenaries, escaped convicts, sewer dwellers, and one sinister ice cream truck. At the same time, he must contend with a mystery closer to home: the true identity of his parents, his most unshakeable obsession. Understanding their past may be the key to Auction City's future as it teeters on the brink of chaos.

If Andy can't solve this case, the Floodgate will fail...and his city will burn.

What listeners say about Floodgate

This was a slow burn. You are confused and befuddled as the protaganest and relaxation of what is happening is slowly revealed, like peeling an onion. A conspericy theorist and deceased excop is looking to some payback on the corrupt system that railroaded him. What he finds is more than he battened for.

It's not very often that I think "will this book just end already!"

But this time I did. It's a long, drawn out, boring story line. I've read everything Johnny Shaw has written and until this book, absolutely loved his style. If you haven't read The Big Maria or the Jimmy Vedeer series stop here and go read them. They are fantastic!!! I fear if you introduce yourself to his work with this novel you will not give him another thought and that would be a true loss. His other novels are brilliantly executed. I gave this book 3 stars because I downloaded the audible version and the narrator deserves credit, he did a good job.

What in the World

I'm not too sure what happen to Johnny Shaw's writing, but "Floodgate" is not his style from his other books. There is no humor in this book and all of the sentences are very choppy. There is no flow to the plot and very edgy use of words. Mr. Shaw, what in the world happen to you? I was expecting another Dove Season, Big Maria and Plaster City, but then you gave us a curve ball with "Floodgate" that doesn't makes any sense. Your humor is missing this one for sure. Total bomb on this one.