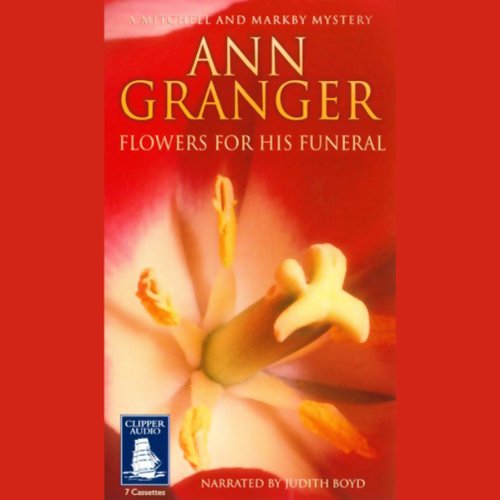 Flowers for His Funeral, Mitchell and Markby Village, Book 7

When Meredith Mitchell bumps into her old school friend Rachel Hunter at the Chelsea Flower Show, she is shocked to discover that she was the first wife of her companion, Chief Inspector Alan Markby. But the meeting is not the only surprise; before the afternoon is out, Markby has a death on his hands.
©2004 Ann Granger

What listeners say about Flowers for His Funeral, Mitchell and Markby Village, Book 7

I Am Addicted To This Series..!!

I really don’t mind admitting that I am completely addicted to this series..!!
The writing of Ann Granger and the narration from Judith Boyd are remarkably satisfying..I’m on to the next one..!!

This book was very interesting- easy to listen too - and kept me enough intrigued that I looked forward to getting back to it - would recommend.

A good story from early in the series

I haven't listened/read Anne Granger's books in chronological order and found this one gave me some of the back-story for inspector Markby's failed first marriage and early days of his relationship with Meredith Mitchell that had been alluded to later books. I needed to concentrate at the beginning of the book as quite a few characters are introduced and it wasn't obvious what the connections were between them. However, once everyone one was in place the story cracked along and things became clearer. As usual with this genre one has to accept that the principal characters come to a place and multiple murders occur! Enjoyable.

A great murder mystery and very enjoyable with twists and turns, if you like Agatha Christie novels this is for you.