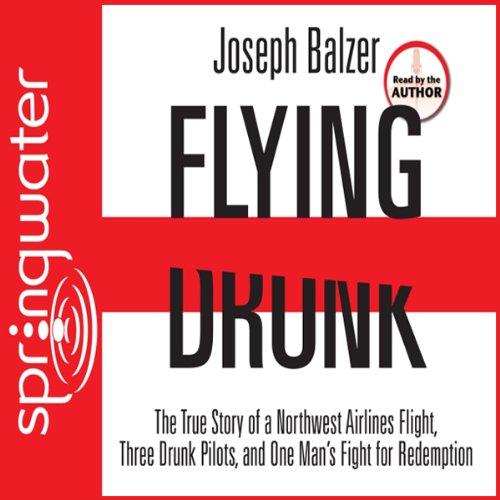 Since he was a young boy, Joe Balzer dreamed of flying. He pursued his goal with a vigorous passion and earned his pilot licenses, piling up hours of flight time with a wide variety of planes and jets with one overarching goal: to one day fly for a major airline.

But Joe had a problem. He was an alcoholic and refused to admit to himself that he had a problem. His alcoholism caught up with him in March 1990, when Joe was arrested with two other pilots for flying a commercial airliner while under the influence of alcohol. His world began crumbling around him and his new marriage faced the ultimate test. He lost his promising career and his dignity. Every major media outlet, including The New York Times, Newsweek, and Time magazine covered the shocking story for the stunned American flying public. The trial that followed drained Joe's life's savings and federal prison nearly broke him.

Flying Drunk is Joe's bittersweet and thoroughly chilling memoir of his twisted journey to a Federal courtroom, his time in the notorious Federal penitentiary system in Atlanta, and his struggle to recapture all that he held dear.

Today, Joe is a recovering alcoholic, celebrating more than 19 years of sobriety. The long road back from perdition led him to American Airlines, where good people and a great organization recognized a talented pilot who had cleaned up his act and was ready to fly again, safely.

Flying Drunk is an incredible journey of the human spirit, from childhood to hell, and back again. Everyone should listen to and heed its message of hope and redemption. No one who does will ever forget it.

What listeners say about Flying Drunk

As a pilot (though I don't fly for a living), I remember well the infamous incident of which Joe Balzer was a part. I remember wondering how they could do what they did. When they were sentenced, I remember thinking that they got what they deserved.

Listening to Joe's account of that tragic moment in the lives of three pilots and Joe's struggle to regain his life was at times painful and often moving. His experience in the criminal justice system was particularly wrenching, as was his up-again-down-again effort to remake his flying career.

Although Balzer's writing and narration are clearly heart-felt and very compelling, there was one thing that really troubled me about the book: his bitterness toward the airline and the other two members of the flight deck on that fateful day. When he hears that the captain regained his license and eventually his job (the captain in question eventually retired from the airline as a 747 captain), he is clearly angry. Does he have any idea what that captain went through in order to accomplish that...what his life changes might have been like?

The fact that Balzer can say almost nothing good about the captain, save one feeble effort near the end, and the fact that the first officer has never contacted him since the trial, makes me wonder if Joe isn't quite the kind of person we would want him to be as we hear his story.

In the end, I congratulate him for his courage and persistence, but I'm left with some lingering questions about the true dynamics of that flight crew...especially what Joe's role in it might really have been.

In many ways a heart wrenching story!

Where does Flying Drunk rank among all the audiobooks you’ve listened to so far?

Clearly the author...this was a heart wrenching story of a man that was forced to deal with his personal demon (alcohol); through the huge impact it had on him personally and professionally, and how leaning on the Lord delivered him from a life of bondage while at the same time growing him as a father, husband and a child of God. His path of redemption was one that many can benefit from.

What does Joseph Balzer bring to the story that you wouldn’t experience if you just read the book?

Emotion...having Joseph read the book brought a level of emotion that one would not otherwise get by reading it.

Well done...this story renewed my faith in humanity! As Yogi Berra once said, "it ain't over until it's over!" God is good!

Touching and Heartbreaking - with a good ending.

Would you consider the audio edition of Flying Drunk to be better than the print version?

Thank you for taking the time to write this book Joseph. We can all benefit from the telling of this experience. As a fellow pilot, I wish that you didn't have to experience the limits of the law; however, you have paved the way for other's to avoid such extreme judgement and consequences.

Turns out its Christian propaganda book. Fine if you are into that thing, but no good if you wanted to actually understand what happened.

Eight hours of excuses from the biggest "victim" of the whole fiasco. Several parts of the story are so absurd it's laughable. The narration sucks, too. Guy can't even tell his own story.

It was hard not to be moved by Mr. Balzer's story. His persistence and struggles with alcohol, losing his coveted job and subsequent long uphill climb back should be an inspiration to anyone. It should also serve as a great education for teenagers about the dangers of alcohol and alcoholism in a format which they (especially boys) should find palatable (no pun intended.) Although the book is not preachy, it is also a wonderful testimony to his Christian faith in a way that should not offend any but the most adamant heathens! Ha! Mr. Balzer is very open about his feelings and internal struggles in a way that most men might not be, and I think that women would enjoy the story also. Since the author reads the book himself, this provides extra emotional punch to his writing- it comes from the heart. A terrific book!