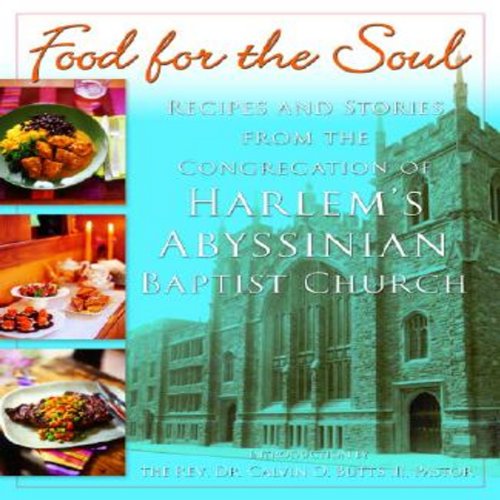 Food for the Soul

From Harlem’s Abyssinian Baptist Church, one of the most esteemed centers of African American spirituality in the country, comes Food for the Soul - a compilation of more than 100 recipes, and the many stories behind them shared by its congregation. Since its founding in 1808, Abyssinian has been a major social and religious voice of black Americans. The oldest African American church in New York State, it is a cultural melting-pot ministry with members from throughout the African diaspora - and a history of cooking reflecting that diversity.

Yet beyond the great recipes for dishes such as Bahamian Seafood Cobbler, Soulful Chicken Stir-Fry, Whipping Cream Biscuits, and Mama Georgia’s Sweet Potato Pie lies a rich and textured account of how the church incorporates the creation and enjoyment of food and the care of the physical body into its love for and devotion to God and humankind. Brimming with updated, healthy renditions of favorite old dishes, Food for the Soul is also illustrated throughout with beautiful photographs. Woven through the book are stories associated with the recipes that are full of life - humorous, moving, joyful. From a churchgoer who started making spicy chili in the ‘60s as the South Bronx burned (Chef J’s 5-Alarm South Bronx Chili) to another who still re-creates the one-pot dinner that was the only meat dish her large and poor family could afford each week (Booba’s Saturday Night Special One-Pot Meal), these anecdotes and recipes come from the heart and provide deep sustenance to the body and soul.