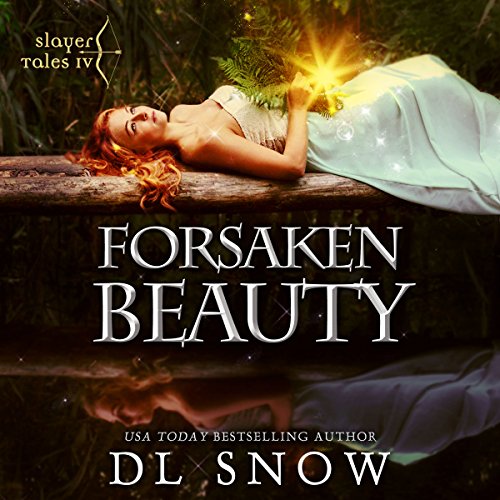 From USA Today best-selling author of Thief of Hearts - a fantastical retelling of Robin Hood - comes the next book in the Slayer Tales Saga, Forsaken Beauty, a full length, standalone novel of fantasy, adventure, and romance

A good witch, a dragon sorceress, and a princess in danger of losing her soul. All three are destined to play a part in the ultimate battle between good and evil. The good witch, Muriel, has been charged with protecting the infant princess of Lorentian after the child nearly fell into the clutches of the dragon sorceress during her royal christening. Muriel must take the babe into hiding until the girl reaches the age of 16. But the king and queen insist Muriel be accompanied by Allan A'Dale, a much too handsome and much too tempting warrior. He is to be her husband on this sojourn, but in name only, for Muriel must remain chaste in order to retain her power.

The pair must keep the child hidden for 16 years. Sixteen years of constant temptation. Sixteen years of pretending to be husband and wife while never being allowed to consummate the union. It's torture in its purest form. But it's also a necessity, for if Muriel fails to remain pure, her magic will no longer be strong enough to hide the princess from the evil dragon-queen and all of the assassins charged with finding them. If she fails to keep her feelings at bay, Lorentia will be lost and the continent will be faced with another dragon war.

Muriel cannot fail. Yet a surprise visit from the queen, the child's mother, sets in motion events that make even the purest of hearts waver.

What listeners say about Forsaken Beauty

Story had the makings of greatness from characters to world building, but the story itself just felt like something was missing to string it together. maybe if less time was spent on the characters being sexually charged and more on weaving a story together it would have been more complete. Additionally, the ending felt more like a cliffhanger and left me feeling a bit off balance. Finished the story for the big reveal but if you can't get through it, it's ok, it's not worth.

Narrator kept the story as interesting as it could be with accents and tones.

I am on the fence in regards to the ending. It seems like it ends in a cliffhanger because so much is left unsaid and undone. It could also be that the writer wanted the reader/listener to think of their own ending. I haven’t looked up all the rest of the books from this author to see if there is more to read, but there is not any at this time left to listen to. I did enjoy this book, as well as the previous one.

This is a decent story and the author does a decent job or narrating. Some of the voices are hard to listen to but overall the performance is good. The transition from each characters storyline is terrible. There isn’t a pause of any kind she just keeps talking and you eventually figure out that you are experiencing a different point of view. Overall worth a listen.

It was just weird all the way around. Multiple POV's, which I hate. I don't want to know what is going on in the evil characters! Then the author had to throw in "almost" having sex with other people because, well, they (the king and queen) were apart for 10 years because she left to find her daughter! Before that she couldn't have sex with her husband for 5 years befor that because she was so distraught!! Really??!!? Then the other near impossible situation was that the witch and Alan, who were raising Hope as their own didn't have sex or mess around till about 14 years??!! He was faithful to her for that long? No sex with other women when he went into town?? Then the good witch switched her memories with the queen and that really freakin got weird! I didn't like it. Had to skip a lot because I was getting so pissed! Then the huge cliffhanger was not cool. Eleanor, evil dragon hag took off with the Kung and queen. Yep, that was the ending. I loved the first book though!!!!

I thoroughly enjoyed the book but when it got to the end - left me hanging. I have tried to find out if the ID a book two but can't find anything. I would like to find the book each chapter starts with but again to no avail.

not a good read

I don't get the name forsaken beauty. there was nothing about a forsaken beauty. I thought it was going to be more like sleeping beauty. were a girl is curse and some saves her. but this book made no since. it went from character to character in different scenes.it was hard to keep track of it all.

Is there going to be a second book? Pretty disappointed when the story is at its peak and I look down to realize there is ONLY 2 MINUTES LEFT.
Still a great read though just disappointed that it ended so abruptly.
Also, the transitions to other characters perspectives was really rushed i was honestly 4 hours into the books before I got used to the sudden character change. The narrator barely took a breath in between.

this was a good book

this was a good book. I was a bit disappointed with the cliffhanger, but only because I havent been able to find the next in kindle, audio or paper back. also I read in other reviews that others as well as myself feel like this is part of a series with other books and didn't have much luck either finding those.

Not gushing as much over this one

Ok. Yes I liked it, but not as much as the first one. Again I love the reference to fairy tales, though this book's plot strayed from the classic in expected and unexpected ways, much like the previous one. The Robin Hood main characters were only mentioned in passing, as was the girl who resembled Snow White. I can't help but think there should be more to their stories, at least the Snow White girl anyway. But of course this book is left with a cliffhanger and the bad guys still alive and well. As for the narrator, she does a good job, but it's hard to tell when she's reading male or female parts, no matter if it's a boy vs girl or a man vs woman. So that was confusing more so in this book than the previous one.

Occasionally the it was hard to distinguish different characters from each other in the narration and a couple of times the ends of chapters where so tightly edited together that it was hard to tell we had jumped to a different part of the story. Regardless this didnt distract from the overall enjoyment.

loved this book but what happens next? is there another book coming? it's supposed to be a standalone book

It was beautifully written and it has elements of many different fairytales as well as a little steam sprinkle here and there. Bit the end felt incomplete, maybe I missed that this isn’t a standalone. Anyway, great plot and it all comes together and makes sense by the end, even if the story is incomplete.
Amazing narration but it would be even better if there was a second narrator, one for each gender.

A bit too much sex for me. I prefere to use my own imagination when it comes to that.

A delightful listen. Alex Tregear narrates this lively story with various voices and immaculate accents. It’s like having a fairytale read to one by an eccentric aunt. Flawless. Perfect performance. Some of the funny voices take the tale into comedic turns which takes the edge off of just how evil the baddies are. This does also mean that the wonderful steamy scenes described lose a bit of their baser sexiness. If one was to read the book oneself it might all be far more serious in all respects. More lusty and more evil. This audio rendition makes it more tame but does not detract from the perfectly written book. I adored it! Rarely does one find such a tour de force performance in an audiobook. Oscarworthy.

The narrator did a great job! Loved all the different voices! The story is good, but not exactly my cup of tea😂

this is not the first time I have got a book and that just ends with not only no real ending. but 2nd book 📖 so why is there so many of books on Audio that does not let the reader finish the series. As this is very expensive and frustrating.

Absolutely adored listening to this, the performance from Alex is outstanding. She is extremly clever at changing her voice to make the characters talk n so bring the story alive. She's very clear whilst reading the book, so one can feel that shes putting her soul into this not just her heart, definately a terrific actress n I would def check more of work out.
This is the first book Iv ever read from D. L. Snow, but the story is really good n would most certainly recommend. No bad language, which is nice n is suitable for all ages