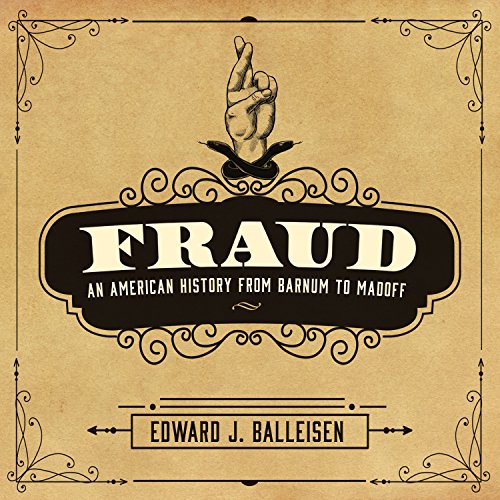 The United States has always proved an inviting home for boosters, sharp dealers, and outright swindlers. Worship of entrepreneurial freedom has complicated the task of distinguishing aggressive salesmanship from unacceptable deceit, especially on the frontiers of innovation. At the same time, competitive pressures have often nudged respectable firms to embrace deception. As a result, fraud has been a key feature of American business since its beginnings.

In this sweeping narrative, Edward Balleisen traces the history of fraud in America - and the evolving efforts to combat it - from the age of PT Barnum through the eras of Charles Ponzi and Bernie Madoff. Starting with an early 19th-century American legal world of "buyer beware", this unprecedented account describes the slow, piecemeal construction of modern regulatory institutions to protect consumers and investors, from the Gilded Age through the New Deal and the Great Society. It concludes with the more recent era of deregulation, which has brought with it a spate of costly frauds. By tracing how Americans have struggled to foster a vibrant economy without enabling a corrosive level of fraud, this book reminds us that American capitalism rests on an uneasy foundation of social trust.

What listeners say about Fraud

Encyclopedic; a bit dry in tone, but informative

I didn't know there was so much to say about fraud. This is at once a cultural and a legal history. The listener seeking flash or entertainment will probably be disappointed. It sounds more like a textbook than anything else. But the expression is sophisticated. The words chosen are crystalline in their aptness and clarity. As a professor in law, it is surely in my wheelhouse, and in that, a pleasure to listen to. What appears between the lines is a very rich social and social-class history of business groups in America. The Republican Protestant elites (and the prejudices surrounding them) in their battles with the relative outsiders in business are particularly well described. Also interesting is the fine line between energetic entrepreneurship and fraud, exemplified in the development of Sears, as it tangled with and engaged various regulators. Better Business Bureaus, Rotary Clubs, a curtain is pulled back and more revealed about the struggles and balances between eager promoters and (sometimes self-appointed, sometimes blinkered) guardians of business virtue in American history. Here I get a different vantage in the dynamics between sometimes vital, sometimes intrusive regulators, and the private forces they wrestle with.

Would you try another book from Edward J. Balleisen and/or Tom Perkins?

I actually pre-ordered this before it was released as I am interested in the subject matter. Unfortunately, within 10 minutes of listening I realized that this wasn't the sort of book I thought it was going to be. This book takes a scholarly approach to "fraud" as a subject, instead of exploring the characters and details involved in various frauds in American History. The result is that it has the feel of an extremely dry and boring academic text. The monotone narrator certainly didn't help also, and it was very difficult to stay awake while listening.

In summary. Democrats are good, republicans are bad

Very politicized book. Not much useful content. I wouldn’t buy it. I don’t even remember how I got it.

Good Information to under laws

Good book to read on government response to fraud. It suggests buyer beware before purchase.

I can't finish this book. I've read more than enough academic books in my life and career and I was looking more for a fun and informative book on the history of fraud. This book provides far more information on macro/micro-economics and the development of law and legal proceedings with respect to fraudulence. It's a rather dry and tedious read.

It’s a relatively interesting history of regulation and prosecution of fraud. If you’re wanting a history of scammers or details of ripoff artists this is pretty light on those details.

Mainly a book about law

Given the title and description I expected a historical overview of frauds, cons and dishonest marketing. The book does contain that, but baked into a long-winded exploration of consumer/commerce law in the United States.

There is a brief part about behavioural economics in the consumer fraud space, and some interesting stories and anecdotes about known and obscure fraud cases, but you have to listen to long discussions of legislation, government regulation, and court cases surrounding them.

All in all, this is a book I would have liked to like, and I find parts genuinely fascinating - but I was bored by too many passages. Ultimately it is a book on the history and sociology of law.