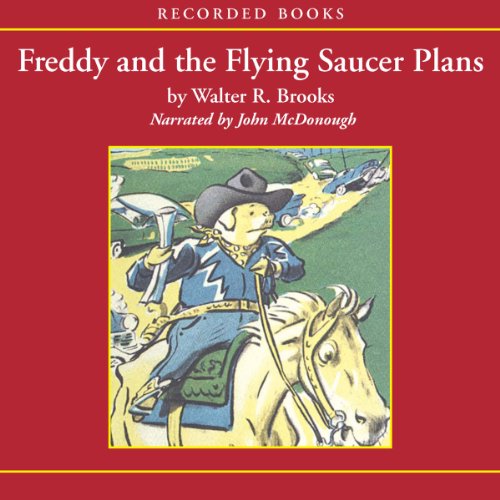 Freddy and the Flying Saucer Plans

While Freddy the pig relaxes in his best cowboy outfit and sings a song, he decides that he needs a vacation. He will ride his pony, Cy, out West. He'll see some wide-open spaces and maybe find some excitement.

But before Freddy can leave, the excitement finds him first. Uncle Ben races up to the farm and asks Freddy for help. A pack of sneaky spies is trying to steal Uncle Ben's plans for building a flying saucer. Soon, Freddy is riding into one of the wildest adventures of his life, one that will require his most clever disguises!

In the Freddy the Pig books, generations of children have enjoyed the chubby but poetic detective and his animal friends on the Bean Farm.

Always have loved the Freddy the Pig books, and have never been disappointed in any of them. Mr. Brooks' style of writing mixed with John McDonough's excellent narration captivate the listener. It almost feels like you're right there in the story with the characters.
I recommend any of the Freddy books

No one but John McDonough could pull this off!

Where does Freddy and the Flying Saucer Plans rank among all the audiobooks you’ve listened to so far?

I grew up loving Mr. Brooks,Freddy the Pig series and have collected most of them. This is one of my favourite stories,as Samuel Jackson the Mole is introduced. But,come on,it has a bit of everything we love! Spies;Freddy in various disguises;Jinx the cats' humourous jabs at Freddy;Uncle Bens' inventions,to name a few. It has Walter Brooks humour at his best. The plot and sub plots are excellent;the Flying saucer Plans being pursued by spies;Samuel looking for his lost treasure;Jinx tangling with 'Grisli' and the cannibal ants;as well as Freddy riding Cy!

Brooks humour and the fast-paced adventure!

What does John McDonough bring to the story that you wouldn’t experience if you just read the book?

John McDonough captures all the little nuances of the characters personalities. First one I listened to I thought,this is what I knew FREDDY would sound like!

Yes and I did.....Then I listened to it again the next night!

Just a tip of the hat to whoever thought to choose John McDonough to do these fabulous stories! I don't believe anyone could have done them as well as he! - Ron L.

The Freddy books are great, they deal with complex issues, yet are quite funny and engaging to kids, plus it's perfect for long trip at 3+ hours. Highly recommended

We love the Freddy books! I was so excited to find out that Audible.com has them! I would HIGHLY recommend the Freddy Series for families with children around 8 and up. These are great books! We all can't wait to Listen to the next one! Th whole family thinks Jhon McCdonough has a great voice!!!