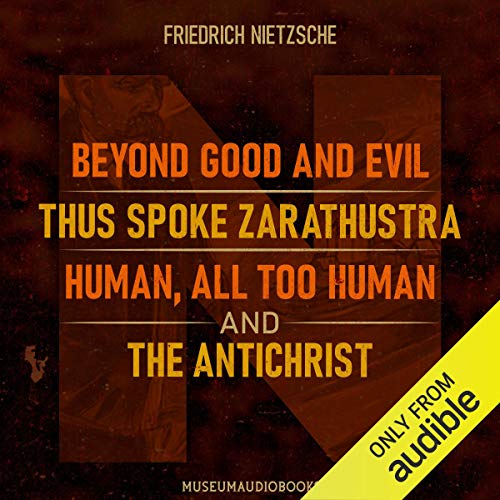 This collection of Friedrich Nietzsche’s most famous works contains Beyond Good and Evil, Thus Spoke Zarathustra, Human, All Too Human, and The Antichrist.

Beyond Good and Evil: Prelude to a Philosophy of the Future is a work that further explores the ideas in Thus Spoke Zarathustra, with a more critical and polemical approach. In Beyond Good and Evil, Nietzsche accuses past philosophers of lacking critical sense and blindly accepting dogmatic premises in their consideration of morality.

Thus Spoke Zarathustra is a philosophical novel dealing with ideas such as the "eternal recurrence of the same", the parable on the "death of God", and the "prophecy" of the Übermensch.

Human, All Too Human: A Book for Free Spirits examines a variety of concepts in short paragraphs or sayings.

In The Antichrist, Nietzsche attacks Christianity, contending that pity has a depressive effect, is harmful to life, and preserves that which should naturally be destroyed. For a noble morality, pity is a weakness, but for Christianity, it is a virtue.

What listeners say about Friedrich Nietzsche: Beyond Good and Evil, Thus Spoke Zarathustra, Human, All Too Human, and the Antichrist

Great collection for the price, but start listening, you’ll find out why.

Very poorly recorded - very quiet in comparison to all other recordings. And very poorly read, too. Sorry, but Nietzsche cannot be read as if it’s a story about a teenager’s struggles with first year of High School.
Lesson: don’t be cheap!

The reading is pretty terrible

I'm actually going to buy a different version. I got this because of the combo but they have a nasaly William Shatner impersonator reading this.

Ellis Freeman is difficult to listen to.

I'm not sure about the content of the book, I'll have to listen to someone else, as I found Mr freeman hard to listen to. The reason I say this is because he sounded as though he was reading the book for the first time, and didn't understand what he was reading, or as if he didn't know how to read the sentences, where the breaks were or not, so it was difficult to follow. I don't mean to insult, I'm just explaining my experience.

Cheap for a reason

This entire four-book collection just has chapter numbers – with no indication whatsoever as to which book starts where. Bad form, Audible! So you will definitely need the following info:

The narrator has no sense of cadence or punctuation. There is no flow to the words making the content incomprehensible. It sounds like the book is being read one word at a time with no prior knowledge or understanding of the subject. I have given up and will try another production.
It is hard to rate the story given the damage done by the performance. It’s probably better than two stars but I can not tell.

The pronunciation of key figures and terms was pretty off- Goethe and Wagner are examples of names that were mispronounced. I found it kind of funny, actually.