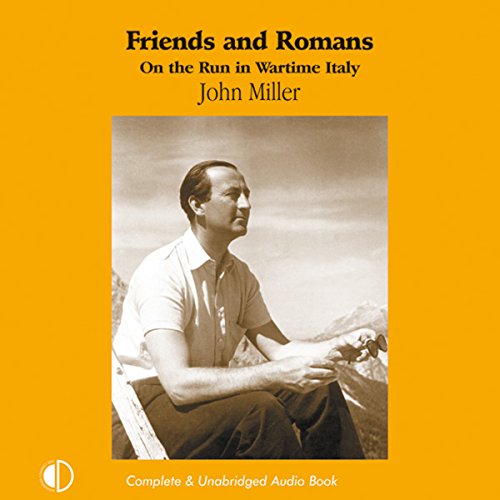 With a single daring leap from an Italian train carrying prisoners of war, John Miller jumped out of the war of soldiers and into the war as lived by Italian civilians - many of whom risked their lives to help him.

The year was 1943 and Captain Miller had been in captivity for over a year. Italian anti-fascists harboured and fed him, first in a remote mountain village, then in Rome itself. For months he posed as a deaf-mute and member of the Fascist Youth in order to dodge German patrols and the Italian secret police - until the Allied liberation of Rome brought GIs flooding onto the streets.

What listeners say about Friends and Romans

Fascinating story of an English POW in Rome

What made the experience of listening to Friends and Romans the most enjoyable?

Great story and the best narration I have heard.

What was one of the most memorable moments of Friends and Romans?

His escape and rescue

What does Gordon Griffin bring to the story that you wouldn’t experience if you just read the book?

Yes, if I could

The author’s story was not very remarkable. He hid out with a very brave and kind Italian family. Would have been more meaningful with a more extensive look at the war.

A excellent book, well written. I could not stop listening. Highly recommended. It reminded me of my father relating his escape from a pow camp Sforzacosta camp 53 near Masarata in Italy.He and his brother escaped at about the same time as the author.