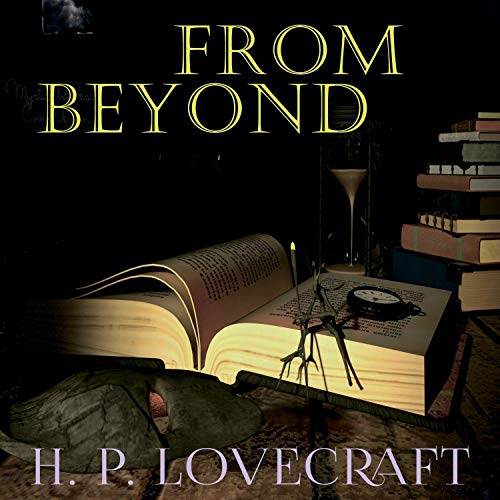 "From Beyond" is a horror short story by American writer H. P. Lovecraft. It was written in 1920 and was first published in The Fantasy Fan in June 1934.

The story is told from the first-person perspective of an unnamed narrator and details his experiences with a scientist named Crawford Tillinghast. Tillinghast creates an electronic device that emits a resonance wave, which stimulates an affected person's pineal gland, thereby allowing them to perceive planes of existence outside the scope of accepted reality.

Sharing the experience with Tillinghast, the narrator becomes cognizant of a translucent, alien environment that overlaps our own recognized reality. From this perspective, he witnesses hordes of strange and horrific creatures that defy description. Tillinghast reveals that he has used his machine to transport his house servants into the overlapping plane of reality. He also reveals that the effect works both ways, and allows the alien creature denizens of the alternate dimension to perceive humans. Tillinghast's servants were attacked and killed by one such alien entity, and Tillinghast informs the narrator that it is right behind him. Terrified beyond measure, the narrator picks up a gun and shoots it at the machine, destroying it. Tillinghast dies immediately thereafter as a result of apoplexy. The police investigate the scene and it is placed on record that Tillinghast murdered the servants in spite of their remains never being found.

What listeners say about From Beyond