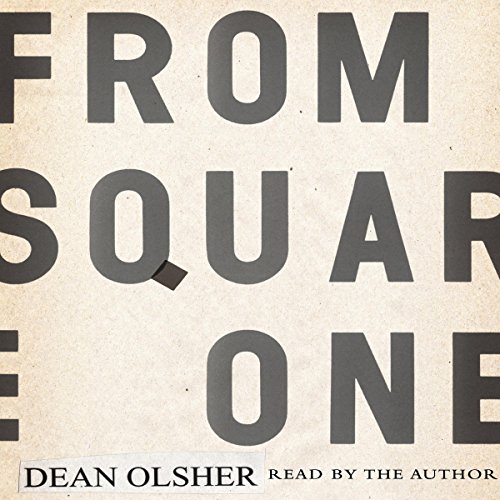 From Square One is Dean Olsher's captivating and in-depth exploration of the cultural history, psychology, and even metaphysics of crosswords -- their promise of a world without chaos and uncertainty.

It is often repeated that more than 50 million Americans do crossword puzzles on a regular basis. Skeptical of that claim, Dean Olsher does his own research and finds that the number is nearly dead-on. Filled with lively, original reporting, From Square One disputes the widely held belief that solving crosswords helps prevent Alzheimer's; in fact, the drive to fill in empty spaces is more likely a mental illness than a cure. While "puzzle addiction" is usually meant as a lighthearted metaphor, the term contains more than a nugget of truth.

Olsher looks into the origins and traditions of this popular pastime, which made its debut in a New York newspaper in 1913. Or did it? Along the way, he takes readers inside the making of a crossword. He also revives the quest of musical-theater legend and puzzle constructor Stephen Sondheim to find an American audience for a British crossword style that demands a love of verbal playfulness over knowledge of arcane trivia.

Informative, engaging, and often surprising, From Square One is a unique and enjoyable read for puzzlers and nonpuzzlers alike.

A thoughtful and moving book

Dean Olsher has produced a thoughtful and moving meditation on life, creativity and the crossword puzzle. It's astonishing how his supple mind is able to move from the concept of the puzzle to embrace a diversity of elements, everything from Scott Joplin, to Stephen Sondheim to love and marriage (one held together by the daily crossword). It's witty, surprising and heartfelt. Moreover, Olsher has artfully embroidered his subtle narration with sound and music. I love the bass clarinet!