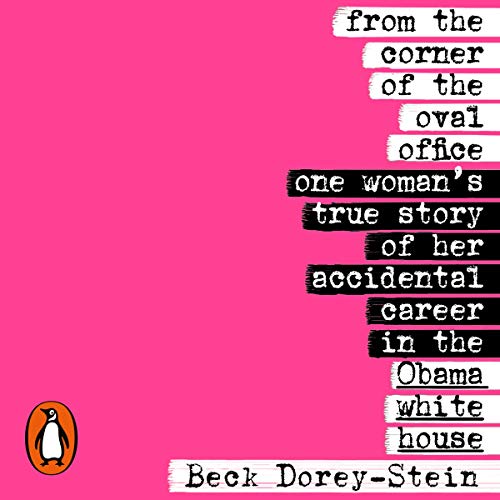 Random House presents the audiobook edition of From the Corner of the Oval Office, written and read by Beck Dorey-Stein.

The compulsively listenable, behind-the-scenes memoir that takes listeners inside the Obama White House, through the eyes of a young staffer learning the ropes, falling in love and finding her place in the world.

In 2012, Beck Dorey-Stein was just scraping by in Washington, DC, when a posting on Craigslist landed her, improbably, in the Oval Office as one of Barack Obama's stenographers. She joined the elite team who accompanied the president wherever he went, recorder and mic in hand. On whirlwind trips across time zones, Beck forged friendships with a tight group of fellow travellers - young men and women who, like her, left their real lives behind to hop aboard Air Force One in service of the president. But as she learned the ropes of protocol, Beck became romantically entangled with a colleague, and suddenly the political became all too personal.

Set against the backdrop of a White House full of glamour, drama and intrigue, this is the story of a young woman making unlikely friendships, getting her heart broken, learning what truly matters and discovering her voice in the process.

"Who knew the West Wing could be so sexy? Beck’s unparalleled access is obvious on every page, along with her knife-sharp humour... Lots of books claim to give real insider glimpses, but this one actually delivers." (Lauren Weisberger, author of The Devil Wears Prada)

What listeners say about From the Corner of the Oval Office

What a life! Best book I"ve read in years! I want more from Beck Dorey-Stein.

I could not stop listening to this book.

Not what I was expecting at all! Largely focuses on her personal life (which I absolutely loved!) As a 24 year old girl, I can relate to some of the situations she ends up in. I’m sure a lot of people can relate to her story - everyone makes mistakes and we have all done things that we are not proud of. I loved her inspiring quotes such as ‘change is the only constant’. I loved her honesty and humility. She is not afraid to portray herself in a negative light. In fact at one stage she even refers to herself as the antagonist. I would definitely recommend this memoir to others! Can’t wait to read more of her work in future!

This is a lovely book. Bec is a great story teller. However a slow start.

My favourite book of the year

This book is incredible, The West Wing meets Bridget Jones in a series of events.

Wonderful insight into another world

Wasn’t sure what to expect but thoroughly enjoyed it. Well written and narrated by Bec. An easy listen and an interesting insight to the presidential bubble.

Think of a political fly on the wall book crossed with a ‘chick lit’ (literature) fun read.

The engaging storytelling of behind the scenes of Obama’s administration with interesting observations and poignant moments run alongside Beck’s love stories and important friendships she makes along the way.

All the more important, in this current Trump administration, the book places emphasis on strong values, beliefs to make the world a better place and the importance of hope.

Highly recommend attending Beck’s book reading tour if you get a chance. We saw her in Manchester where her delightful, friendly, bubbly personality shone through.

Great to listen to the author read her own story on her audio book.

The White House / Obama bits were good, it’s why I bought the book. We all like a fly on the wall of the famous. T

I wasn’t interested in ANY of the author’s “love life” and there was far too much of it.

Not at all what I thought I was buying.

This was very enjoyable initially, it's like the listening version of eating CAKE - it looks good, it offers maximum sugar but empty calories, it feels good at the time but midway through you begin to feel a bit sick.

This is basically all about her affair with a staffer that was not good for her that she kept doing again and again and again and it felt like you wanted her to be one of her friends so you could shake her and be like HAVE MORE RESPECT FOR YOURSELF LADY at the same time wanting to hug her deeply and tell her to get the hell'outta that situation.

She is an amazing narrator and the story is enjoyable, she makes some great points going into the Trump administration but that chapter is very short leaving me wondering if she will write another one. I wished for a better ending, not just because of Trump but personally as well and selfishly for me - it would have made for a better narrative.

Just to let you know, I work for Audible, but the views expressed in this review are 100% my own.

Enjoyed every minute! A fun, funny, honest and addictive read. Very much a 'The Devil Wears Prada', 'Sex and the City' feel, in the fascinating setting of the White House during the Obama administration.