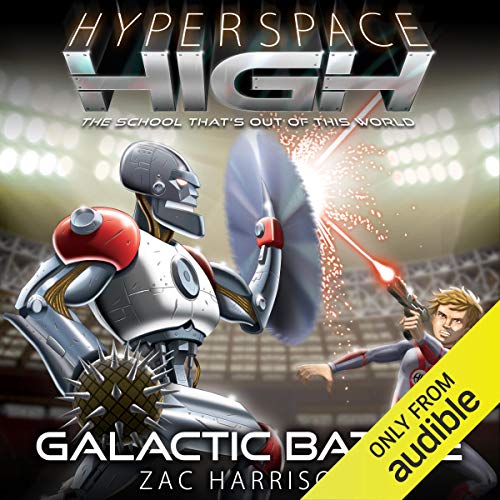 Michael Fenton Stevens gives a vibrant performance of Zac Harrison’s science fiction novel Galactic Battle, the fifth book in the Hyperspace High series. His golden voice and charming interpretation of the effervescent cast of characters makes for an unforgettable listening experience. On Hyperspace High - an educational institution aboard a space ship - students are getting ready for the school’s annual Space Spectacular show. Human John Riley and his classmates have a battle demonstration in store for their parents, but things run amok when their droids mount an attack. Will John and his friends come to the rescue?

It's nearly time for the annual Space Spectacular show, and John and his friends are preparing a battle demonstration for the students’ parents. But when the school's battle droids go on the attack, the students must work together to save the day.

What listeners say about Galactic Battle

to good to be true , the world's best book
, though not the best in the series

Enraptured by this fabulous gem of a book. I cram exuberant praise into my 15-word limit.

5th of 6th book
highperspace high has a 6 book series full of enjoyment! many different adventures with Carl,
emmie and Jhon!