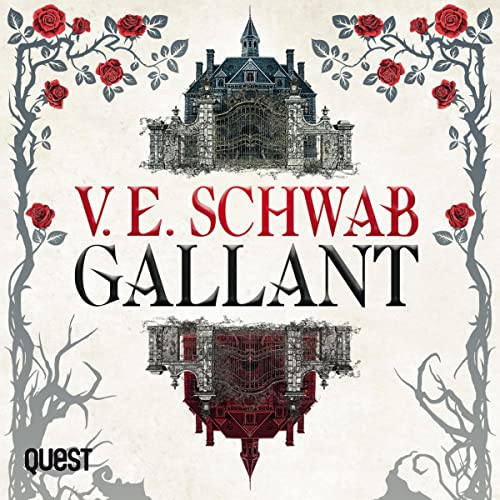 From the Sunday Times best-selling author of The Invisible Life of Addie LaRue and A Darker Shade of Magic comes a stand-alone novel where The Secret Garden meets Stardust.

Sixteen-year-old Olivia Prior is missing three things: a mother, a father and a voice. Her mother vanished all at once, her father by degrees and her voice was a thing she never had to start with.

She grew up at Merilance School for Girls. Now, nearing the end of her time there, Olivia receives a letter from an uncle she’s never met, her father’s older brother, summoning her to his estate, a place called Gallant. But when she arrives, she discovers that the letter she received was several years old. Her uncle is dead. The estate is empty save for the servants. Olivia is permitted to remain, but must follow two rules: don’t go out after dusk and always stay on the right side of a wall that runs along the estate’s western edge. Beyond it is another realm, ancient and magical, which calls to Olivia through her blood.

"A haunting and beautifully tilled garden of darkness, Gallant unearths the shadows - webs of family history, the price of deadly bargains, and the secrets we guard - a triumphant tale that can’t be missed." (Dhonielle Clayton, best-selling author)

What listeners say about Gallant

Dark, bittersweet and an archingly haunting story of loss and love, sagaciously delivered an excellent narrator.

this book was beautifully written and narrated. it is a haunting story (and haunting narration to match). it might keep you up at night

When death is your neighbour…

After reading V.E. Schwab’s Addie LaRue I knew I had to read Gallant. The way Schwab invents and tells her stories fascinates me.

Gallant is about a girl and a house and a obligation to a family she knew nothing about. The day she receives a letter is the day Olivia’s world changes.

The writing, as always is phenomenal. The story intriguing, mysterious and romantic. The notion of home playing a huge part.

The characters are vibrant, admirable and suited to their roles and the part they play in this story of a house.

I enjoyed listening to Gallant as the narration was brilliant. A soft soothing voice caresses the reader as the story unfolds. It was a pleasure to be read to.

A fantastic story, read beautifully by the narrator.
Full of rich descriptions and emotion that grips you and pulls you into the story.
Well written in a way that makes the reader/listener feel they have stepped into the book. One of the best books I've listened to in a while.

Every once in a while, a book comes along that is so wonderfully crafted, so beautifully written, that the story leaps out, grabs the listener, and doesn’t let go until the final sentence… and even beyond. Gallant is one of those rare books.

Part mystery, part horror, part coming-of-age story, Schwab blends these genre conventions masterfully to create something unique, riveting and truly unputdownable. This is YA writing at its very best.

I shall be recommending this book to anyone and everyone for years to come.

A spellbinding story and with a wonderful easy toned narration. A book I would highly recommend.

Oh my word 😱 the descriptive language that Schwab uses conjured the most vivid imagery as I listened to this amazing novel. A great story, well written...and the icing on the cake?.... the narration... Julian Rhind-Tutt , I could listen to his voice all day. I thoroughly recommend this.

Gallant was a fun read. After 'The Invisible Life of Addie Larue' I expected a little more though.

Reminded me of DuMaurier's 'Rebecca'.

I have been wanting to read this for a while, and while the writing and descriptions are enchanting, I thought the plot was a little simplistic. I read this in a day but didn't feel I was as engaged as I expected to be. The characters are a little flat.

Creepy and imaginative tale narrated with skill and mastery. Characters are well drawn and will live on in your imagination long after the story ends. I’m off to tend to my garden ❤️

Beautiful, poetic and delicious. My first reading of V E Schwab and will definitely try others. Dream like narration draws you in and holds you gripped.

Loved it. Narration was excellent. Not my usual type of story at all but kept me immersed. Will seek out more from Schweb.

I really enjoy the writing of this book, which is wonderfully narrated by JRT.
However, as the story goes on it becomes more apparent that nothing is really happening. Not enough to leave a satisfying taste of completion, success or victory over the Antagonist.

There have been some excellent reviews but I cannot see why. Rhind-Tutt is perfection as a narrator but I have nothing kind to say about the book. There was very little plot, an enormous amount of repetition and angst and it wasn't particularly well written. I did something I very rarely do and gave up at about two thirds of the way through.

Struggled to finish this story. Kept getting lost in what was supposed to be a story line.

I was just hooked with this book. Captivated, I felt each emotion the characters felt and I drifted deeper and deeper into the concentric circles of this book.

The narrator was amazing!

I enjoyed Gallant, I was definitely in the mood for a haunted house read 😂 so it suited me perfectly! The narrator was so so good. The sound effects when he is reading the journal gave me shivers. Amazing!

Beautifully written and perfect narration. A dark, haunting tale that reminded me of The Woman in the Black Dress and The Innocents. I loved every minute of listening to the beautiful words that evolved to an absolutely engrossing story.

V.E.Schwab tells intriguing stories with remarkable macabre beauty. It is a tale of integrity and family. A horror perhaps. A quick read for fantasy-oriented teens and young adults. It doesn’t have the epic nature of Addie Larue but it has its heart and the soul. So this is lesser but not disappointing.

The reading is excellent the story is okay when I would rush out and read having really enjoyed the invisible life of Addie, this felt like a disappointment.

I found this book a bit boring and long winded. very descriptive but it just kept dragging on and to no end. narration was spectacular loved how he sounds just wish it was a better story.

The story seemed interesting but I found myself getting bored every time I listened. I’m normally a huge fan of VE Schwab but this book was just taking way to long to get to the plot twists or some answers. I felt like I was having to force myself to continue and in that case new it was time to let it go.

Absolutely love this author. This book was another great read with a fascinating storyline. It was also very well narrated.