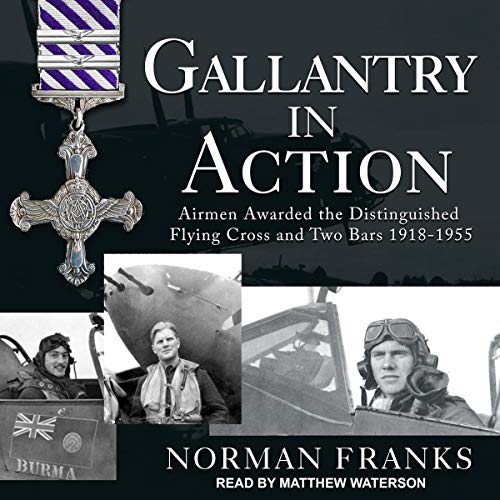 Between 1918 and 1955, 60 airmen were awarded the Distinguished Flying Cross (DFC) and Two Bars. In this book, recorded for the first time together are the mini-biographies of those 60 along with the citations that accompanied their awards, or in some cases the recommendations for them. Also recorded are citations for other decorations such as the Distinguished Service Order, et al. The recommendations were often longer than the actual citations themselves, and during periods of large numbers of all types of awards, these citations did not make it into the London Gazette, recording name of the recipient only.

As the listener will discover, the range of airmen who received the DFC and Two Bars cover most of the ambit of World War II operations, be they fighter pilots, bomber pilots, night-fighter aircrew, aircrew navigators, engineers, etc, or reconnaissance pilots. Each has interesting stories, proving, if proof be needed, their gallantry in action.

What listeners say about Gallantry in Action

Interesting Book/Audiobook, since it deals with airmen that between 1918 and 1955 (please note an additional one is included for one for service in helicopters during Bosnia, Iraq and Afghanistan after 1995). Many names will be familiar, but some not. Reviewing their respective careers this audio book looks at the citations for the awards of either DSO, DFC (plus AFC, CdG, USAFC, etc...) with bar to the respective recipient. The Audiobook perhaps lacks the visual/pictorial impact; but nonetheless it is fascinating to hear how and why airmen attain their recognition for awards.