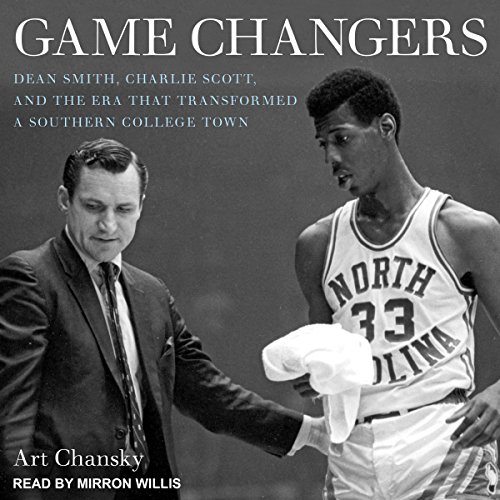 Among many legendary episodes from the life and career of men's basketball coach Dean Smith, few loom as large as his recruitment of Charlie Scott, the first African American scholarship athlete at the University of North Carolina at Chapel Hill. Drawn together by college basketball in a time of momentous change, Smith and Scott helped transform a university, a community, and the racial landscape of sports in the South. But there is much more to this story than is commonly told.

In Game Changers, Art Chansky reveals an intense saga of race, college sport, and small-town politics. At the center were two young men, Scott and Smith, both destined for greatness but struggling through challenges on and off the court, among them the storms of civil rights protest and the painfully slow integration of a Chapel Hill, far less progressive than its reputation today might suggest.

Drawing on extensive personal interviews and a variety of other sources, Chansky takes listeners beyond the basketball court to highlight the community that supported Smith and Scott during these demanding years, from assistant basketball coach John Lotz to influential pastor the Reverend Robert Seymour to pioneering African American mayor Howard Lee.

"One of the most insightful and intriguing books ever written about college sports." (Caulton Tudor, NC Sports Hall of Fame Writer)

Great Story If You Get Past the Awful Narration

The narrator mispronounces words like "Carrboro," "Adolph Rupp," and "Rathskellar" (a Chapel Hill landmark restaurant) and even worse and most unforgivably says "AC" instead of "ACC" (Atlantic Coast Conference) in NUMEROUS places. In other places he mumbles. That's sloppy narrating. His narration is distracting and reinforces the impression an outsider who is unfamiliar with UNC is reading it. Otherwise it's a very good story about the legendary Dean Smith and UNC basketball that deserves a more competent narrator.

Much More Than Basketball

The reader was really bad. He mispronounced local towns and names and was obviously unfamiliar with basketball terms. It was bad enough that it was a distraction, but the book was good enough to power through that.

The author is a Carolina guy. I was afraid that he would deify Smith and Scott to a degree that I wouldn’t like it. He did not, although it is obvious he liked both a lot. He did reveal flaws in both which makes it seem more believable. Overall, it was a very interesting and informative book about events in NC during my lifetime, but during which I was too young to appreciate. I think it’s a must read for Carolina grads and an interesting one for even NC State grads like me.