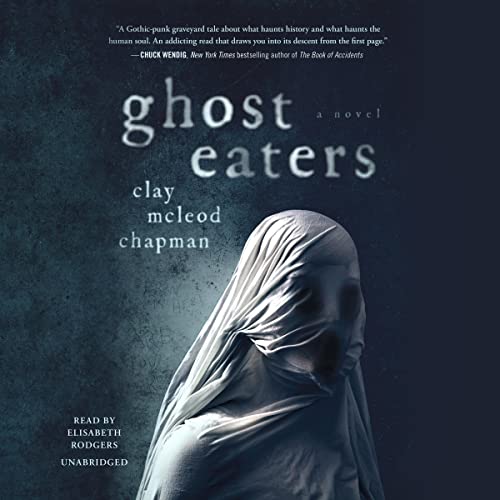 Ever since their on-again, off-again college romance, Erin hasn’t been able to set a single boundary with charismatic but reckless Silas, who has been chasing the next big high since graduation. When he texts her to spring him out of rehab, she knows enough is enough. She is ready to start a career, make new friends, and meet a great guy—even if that means cutting Silas off. But when Silas turns up dead from an overdose, Erin’s world falls apart.

When Erin learns that Silas discovered a drug that allowed him to see the dead, she doesn’t believe it’s real but agrees to a pill-popping “séance” to ease her guilt and pain. When she steps back into the real world, she starts to see ghosts everywhere from her Southern hometown’s bloody and brutal past. Are the effects pharmacological or something more sinister? And will Erin be able to shut the Pandora’s box of horrors she has opened?

With propulsive momentum, bone-chilling scares, and dark meditations on the weight of history, this Southern horror will make you think twice about opening doors to the unknown.

What listeners say about Ghost Eaters

This book was visceral and cinematic. GHOST EATERS had everything--slow building dread, the hopelessness of addiction, ghosts, and the 'just right' amount of creepiness to keep a reader riveted. The main character, despite addiction, was solidly realized and could act on her own wants rather than just being pushed through the story by other characters or plot points. I truly appreciated the lack of a male gaze throughout. The narration was immersive, beautifully modulated, and melodic. Genre-wise this book felt like it leaned a little more toward upmarket horror or literary. The pace throughout felt leisurely and while there was a plot (and a good one) the story overall seemed more character driven. Structurally, Chapman's writing is a pleasure to read (and listen to). It's both lyrical and interesting, with a nice variation to sentence length throughout. Fans of Kathe Koja's SKIN or her THE CIPHER will find GHOST EATERS similar in terms of craft, with elegant sentences that are sometimes dreamily paced and winding, and at other times have a clearly defined internal cadence that thrusts the reader forward. The end result is a work that feels musical throughout. Masterfully done. 5 stars. Highly recommend!

I was hopeful, especially intrigued by the premise but I really struggled to finish.

Listen to this, now. Beautifully written, perfectly narrated.
You think it's going to be one thing based on the title and the prologue but it's something else entirely.
What is the difference between addiction and being haunted? Are we addicted to those we love? if so can they become our drug? and furthermore, what does withdrawal look like?
I love this book and it goes in my list of my favorite horror novels.

What did I just listen to?

I like listening/reading weird and strange stories but this was a bit too weird & strange for my taste.

Happy and Spooked Out

I love and read all things scary. At this point it's difficult to spook me after 30 years of devouring horror. This tale was original, interesting, and scary. Great story telling in this book in that I was there with the characters. The author created a visual experience for me with her words, as well as Steven King another great story teller. I wish I could forget the story so I could read it again.

Way too much time spent in things that were supposed to be cringe or dread. Only thing that kept me going was hoping for some crazy revelation, some twist to blow me away that never came.

Insert any boring real life drug addict story and change the drug name to "ghost". Maybe that's the point. This was painful to finish. The narrator was amazing though.

I got to chapter 17. So boring. Had to give up. Great example of an author with a great idea but couldn’t deliver on developing a compelling plot.

This is about the hell that accompanies drug addiction

This story wasn’t really about ghosts; it was all about the hell that accompanies drug addiction, with a smidge of “White Privilege” lamentations sprinkled throughout like spores riding an air current through a crack house. Don’t waste your time or your Audible credit unless you’re looking for encouragement to escape your addiction(s) or help a loved one do the same.

Uggh, I really wanted to like this based on the description, but it’s dragging on and I’m losing interest…I rarely ever quit a book but I’m throwing in the towel on this one.

well, that was a waste of a credit

I am super into ghost stories but I don't like being grossed out. if you're like me, this book is not for you. watch your gag reflex. it's like the author was going for grossest images possible and had zero character development. so much wasted potential in this book, not to mention some pretty big loop holes. I'm sad I wasted a credit on this. the only reason I finished it was to get my moneys worth.

What a ride into most things unknown!

A strange, racy,scary , ghostly ,druggy intimate tale that gets you hooked . BRILLIANT!