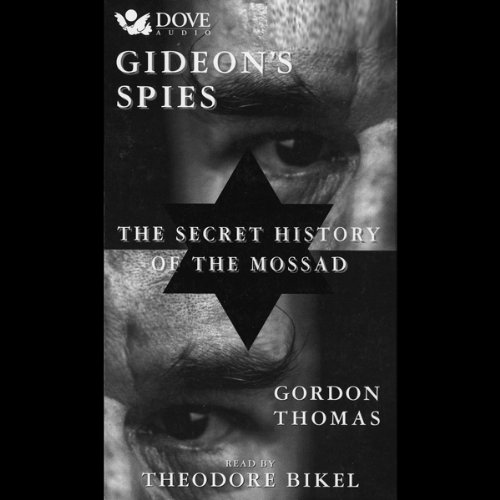 In the secret world of spies and covert operations, no other intelligence service continues to be surrounded by myth and mystery as does the Mossad. Created in 1951 to ensure the future of an embattled Israel, Mossad is responsible for the most audacious and thrilling feats of espionage, counterterrorism, and assassination. To some, Mossad is the precise and at times lethal instrument of Israel's will, a fiercely dedicated group of men and women: an elite intelligence arm. To others, Mossad is a fearsome intelligence organization loyal only to those who can control it: a shadowy ruthless cabal of spies. But no one has ever gotten close enough to Mossad to know the truth. Until now.

Gideon's Spies documents the Mossad's deepest secrets from the end of the Cold War to the present day. You'll learn how the Mossad undercut the CIA's position as the Vatican's prime intelligence source, how TWA Flight 800 was ruthlessly exploited by the Mossad, and most explosive of all, Mossad's involvement in the deaths of Princess Diana and Dodi Fayad. Gideon's Spies reveals the Mossad as it truly is: brilliant, ruthless, flawed, but ultimately awesome.

What listeners say about Gideon's Spies

Spellbound.... a splendid work indeed. A must read for people who understand what it takes to run a organization over decades for protecting its people and it's national goals...

One of the first things on this tape is the suggestion that since Israel formed the Mossad after 1948, they have been involved deeply in every major event in world's history, including the Kennedy assassinations and the death of Princess Diana. Immediately, every piece of information divulged in the entire book becomes suspect. There is such a wealth of evildoings listed and discussed that one must believe it was written to bring down the Mossad, not elevate it. Every country is self-serving and must have its spies, and they all have their dirty tricks and unspeakable events, but I came away with the feeling that the Mossad is the worst of them all... which must mean the most successful? I simply do not feel any sense of balance in this book. Surely the Mossad is involved in patriotic activities as well as international snooping? I give it 3 stars for whatever may be true. I would not use this for a reference book.

This was my 6th book from audible and the only one that is riveting - can't put down listening. The voice is the perfect tone and accent to reinforce the reading. The quality of journalism is superb, getting the right balance between factual information and a great compelling narrative. A must listen for anyone interested in current affairs and the dark underbelly of global intelligence. The relation between the CIA and Mossad is intriguing lsitening.

-This is the book all amateur spies wish were true. Form the plot to murder Lady Di to the kidnapping of an old nazi in Argentina or the sale of missiles from Iran, this book documents the different activities the Mossad has undertaken and how it has acted sometimes in accordance to the israeli government and sometimes in disagreement. Smoky rooms, dingy pubs and backroom deals abound. The picture that emerges is that of an agency too caught up in its own self-importance, whose obsession with the sex lifes of anybody borders in the pathological and whose methods seem to consist mostly of plain bullying and blackmail. Unsofisticated and undiplomatic in most cases and worse: with a lack of a priorities as far as objectives. I guess that might be the real picture, I'll never know, but it is hard to understand why anybody would want to write about it.

some great spy stories--worth the read.

I found this really interesting and it kinda made me want to be a spy. Like any work of history/journalism, the author has some biases. But, as far as books about israel go, the biases are not overwhelming and the author is upfront enough about his motives for writing the book that a reasonably critical listening should not have much trouble putting these stories in the appropriately broader context. The author lingers on some small potatoes stuff that he seems to be the first to have uncovered, but the whole book isnt that long; so, it's forgivable. He is also obsessed with celebrities (the pope, Princess Diana...); so they get a lot more attention than they should in any book about Israeli national security, but...again...forgivable.

Inmensely compelling and authentic. This book leaves you thinking about the events for weeks after.

I have always had a fascination with spy stories and the Mossad - doesn’t get much better than them. This story held my attention from the first word till the last. Anyone who likes spy stories, true or otherwise, will enjoy this book.

A little dry, but a very interesting listen

this was a good story a little dry in the narration but interesting. went very quickly.

A Glimpse of Reality

Love reading espionage stories. This book was a fascinating look at what is behind all those novels.

I love the book, great insight into how ‘democracy’ works.

One negative is that it jumps around a bit with dates and timelines, but otherwise I cannot fault it.

The content was very interesting and informative. A special mention to the narrator who was wonderful in his intonation and pronouncing foreign words. Made listening a pleasant experience.

I really enjoyed this insightful view in the Spy world especially the Israeli and histrionic events I remember seeing on T.V.