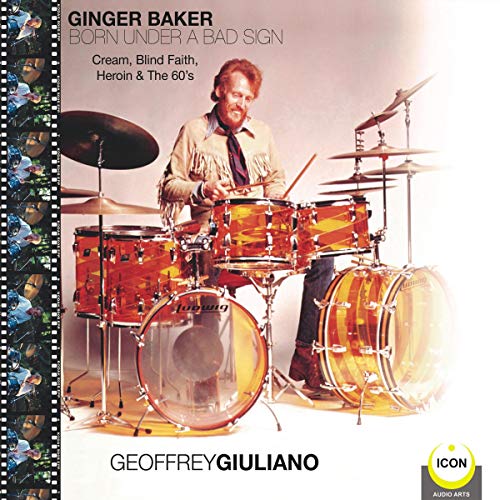 Ginger Baker is, without question, the foremost drummer of his generation, having formed supergroups Cream and Blind Faith. In the early 1990s, Geoffrey Giuliano received a call from Baker asking if he would be interested in writing his autobiography. From there, a turbulent yet fruitful relationship ensued between the two.

While the book they wrote has yet to be published, here, at last, are the exclusive, in-depth, upfront, and highly personal conversations the two unlikely friends recorded in a Western New York studio all those years ago. Ginger speaks his mind, holding forth on the particulars of his amazing life and work and in so doing reveals something he has always ardently tried to hide - that he is really a lovely, caring, sensitive man. For everyone interested in the history, art, and cultural significance of the popular music of the 20th century, this series is a once in a lifetime, must have audio event. Perfect for universities and all educational media. Contains adult language and mature themes. Not recommended for children. Parental warning graphic content. Hosted, narrated and authored by Geoffrey Giuliano

Edited and mixed by Macc Kay in Bangkok

Icon Executive In Charge Of Production Avalon Giuliano in London

Music By AudioNautix With Their Kind Permission