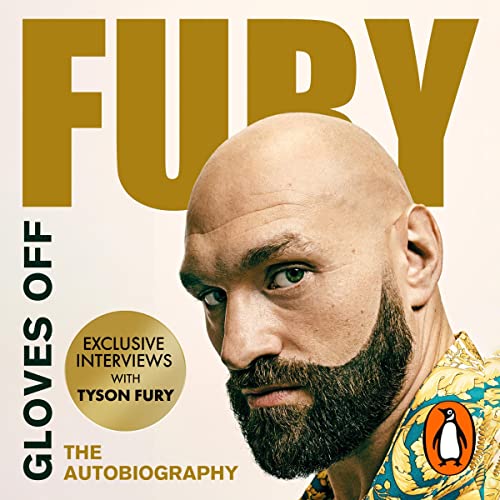 This audiobook includes exclusive and deeply personal interviews with Tyson Fury throughout the audiobook, offering listeners a unique and intimate insight into his life and mind.

Tyson pulls no punches in his most candid, comprehensive and entertaining book yet, which chronicles for the first time in full his inspirational story - the rise, the fall, and the rise again, which saw him come back from the brink of suicide to reclaim his heavyweight crown.

Access-all-areas and full of never-before-told stories, Tyson looks back on his life and career to examine what's really defined him: his Travelling upbringing, his fighting family (including his dad John and his half-brother Tommy), his beloved wife Paris, his 6 beautiful children, his mental health battles, his faith, his boxing rivalries and the fights, pitfalls and challenges along the way.

Tyson shares fascinating blow-by-blow accounts of his inspiring victories against Deontay Wilder, his recovery from the depths of depression, and his journey to reclaiming his world heavyweight title. With revealing intimacy, Tyson also shares new sides to his character: in the weeks before the biggest fight of his career in 2021 the devoted father was sleeping on a hospital floor in intensive care tending to his new-born daughter Athena who was born premature and fighting for her life.

What listeners say about Gloves Off

I thought the editing for the interview bits felt a bit rushed. There were awkward silences between bites

This books was incredible. The fact that the heavyweight champ can admit to struggling wit mental illness, is a hope to us all. God Bless you champ!!

I used to like Tyson Fury. This book has totally changed my opinion of him. He skirts round the bits that he doesn’t want to talk about , he completely changes the story of what happens in some fights, and never even mentions the Dillian Whyte push. But most of all it’s nice to be humble and he certainly ain’t . Destroyed my love and respect for the man , sorry !

Story may be ok if it wasn’t read like a child’s bedtime story. Couldn’t take it serious.

What's not to love about Tyson!?

The most honest, and thrilling sports story of our generation, bar none! A simple blokes bloke, a normal mortal who believed his was destined for more and achieved it! And the reason I seeked the help I needed too. A true legend.

Very good listen gets into how Tyson thinks and feels, hopefully he will be ok with his Demons once he retires

I would have liked him to have gone into more detail about his fights. Those sections were very brief. I also thought the book would have been better if he read it too. It’s still a good insight though and spoke openly about his mental health and family.

Very good book he is very honest about his troubles and how he needs structure in his everyday life. Really good listen

Open honest and keeps it real. Inspiration and entertaining thanks Tyson you have helped me

I’m a fan of Tyson and was looking forward to this one. Unfortunately throughout this book there were contradictions regarding Tysons career, he’s doesn’t fight for money but will only fight if there’s enough money on the line being one of them.

It also didn’t help that the narrator told you the story then Tyson told you the exact same story, I don’t need telling twice.

Granted it got slightly better towards the end but it’s not a book I would recommend.

great story the only thing letting it down for me wasn't enough of the gyspy kings voice. the book would have been better in his own voice.

Even though it was good to get some insight into the autobiography of Tyson Fury it seemed to repeat itself over and over leading to not being excited to hear the next chapter.