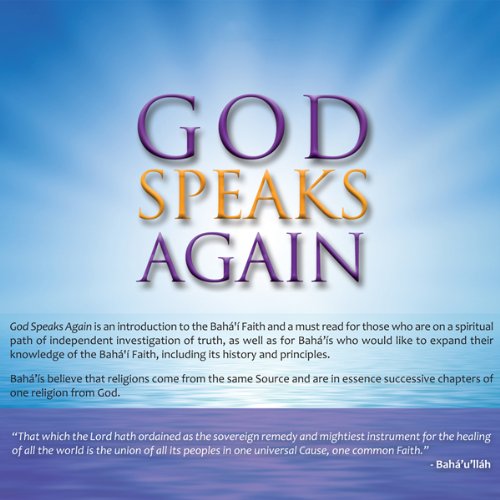 God Speaks Again is an introduction to the Bahá'í Faith and a must-read for those who are on the spiritual path seeking independent investigation of truth, as well as those Bahá'ís who would like to expand their knowledge of the Bahá'í Faith, including its history and principles.

Bahá'ís believe that religions come from the same source and are, in essence, successive chapters of one religion from God. The Bahá’í’ Faith is a recognized independent world religion attracting increasing attention - and a growing number of followers - in the U.S. and around the globe as people from all walks of life search for practical spirited direction and confident hope for the future.

God Speaks Again tells the story of this thoroughly inclusive religion and describes how the history and teachings of the Bahá'í Faith center around the inspiring person of its Prophet and Founder, Bahá’u’lláh (1817-1892), whom Bahá’ís around the world regard as the Messenger of God for this day.

The cornerstone of Bahá’u’lláh’s teachings is the establishment of the unity of humankind, which Bahá’ís believe will be achieved by the application of clearly identified spiritual principles revealed by Bahá’u’lláh. Bahá’ís also believe that there is but one religion and that all the Messengers of God - among them Abraham, Zoroaster, Moses, Krishna, Buddha, Jesus, and Muhammad - have progressively revealed its nature. Together, the world’s great religions are expressions of a single, unfolding Divine plan.

We need more Bahai books into audio. Please consider that. I am dyslexic. I listen to books.

Would you listen to God Speaks Again again? Why?

I enjoyed this book and will recommend it to anyone who wants to know about the Baha'i history and Baha'i point of view.

Not an introduction but just sad history :(

I really wanted to learn about this religion but instead the book just lists over and over again all the persecution suffered by the followers. I wanted to learn the teaching and beliefs not hear an account of their persecution. So mad I purchased this and listened to the whole book without gaining any of the information or introduction to the faith.

This book helped me find my faith again in Baha'u'llah and God. changed my life.

It was a must heard audio book

Hello dearest all friends
If you're interested in intellectuality, spirituality, science, history, new world order, positive connection of religions, unity and the investigation of the truth, you are in a right place. Listen to "God Speaks Again".
I do not consider this book as a mere religious book. I found NO superstitious belief or story in it.
Best Wishes 4 U شاد باشين

Great intro to the Bahá'í Faith

This book is easily the best introduction to the Baháí Faith for this generation. There's a great balance between providing thorough historical context and application to society's immediate challenges.

I appreciate the clear and concise writing and realistic world view… this book is instructive in showing the history and the structure of thinking that defines the Baha’i faith.

I very much enjoyed reviewing the history and teaching of the faith. I think the author did a great job covering a huge amount of information and history without being bogged down. The narrator did a good job keeping the content engaging while still allowing for the seriousness of the material

If you ever wanted to know why you are here on this earth at this particular time, this is a MUST Read.