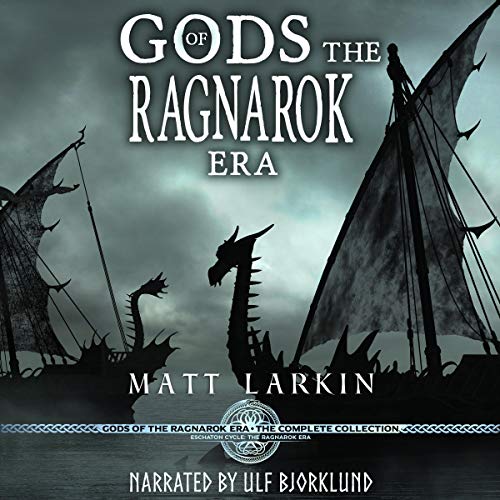 Before he was a god...Odin was a man.

Only a fool would venture into the soul-stealing mists. That’s exactly where Odin is going. Along with blood-brother Loki, he hunts the frost giant who murdered his father.

Caught between the machinations of Loki and a goddess, Odin is drawn into a world of sorcerers, trolls, and terrible secrets. Before he’s done, Midgard will drown in blood.

But what if revenge was only the beginning? A chance at immortality looms. If only he can bear the price....

What listeners say about Gods of the Ragnarok Era Complete Collection: Eschaton Cycle

must read for Asatru

if you love the gods, are a someone that follows the ways of heathery, Asatru, or pagan at all this is a must read.
if you like the wheel of time I would strongly recommend this for your audible collection

When I read the positive reviews, and the commentary regarding the book, I thought, great, this is just what I'm looking for! Ninety two hours didn't hurt, either. I do find, before you yell at me, that books with lots of positive reviews are usually very good.

One of my gripes about the book is the constant fighting, and death. And the fighting wouldn't be so bad if the situations in which it occurred, or even why it began in the first place were more believable. And some of the things Odin does are just plain weird. But this is just my opinion.

I'm a big girl (66 years) and not a prude. But this author is way to enamoured with the word F*. And if you don't like any descriptions of sex at all, there's a few of those, too. They're mildish, depending on your point of view.

THE NARRATOR was great. I'd love to listen to more sci-fi/fantasy, or a couple of other genres with narrow guidelines, lol.

A genius of a tale

It's a well written series and pure genius really.
But absolutely nothing good ever happens throughout the entire series. I mean nothing.
It has some little humor toward the last half of the series but before that it has zero. All characters involved are complex and complete villains. The entire series is depressing as it is interesting. I'm not sure what to make of it really, I suppose it kept me thinking and entertained but I dont believe I liked the story.

don't recommend listening to whole collection in one. break it up w/other books in between.

Having Swedish voice actor Ulf Bjorklund narrate this novelised retelling of the Norse Myths seemed like an inspired choice at first. His clear voice and slight, lilting Scandinavian accent brought a sense of authenticity to the narration. Unfortunately, his reading style and voice talent was not up to the task of reading a tale with dozens of characters. I frequently had a hard time following the long and detailed conversations between characters because all of Ulf's characterizations sounded the same, male or female, Aesir or Jotun, and he had a tendency to run quickly through sentences without pausing for character change. In the end, a larger cast of narrators with a wider range of character voices would do this series more justice.

Matt Larkin has an amazing take on norse mythology. the story never got dull. I found myself invested in these characters lives. Ulf Bjorklund really brought these characters to life for me. His narration was exciting and his accent was perfect.

this is by far the best collection and reader ever. I'm listening again right after I'm done.

Best value on this app! And a great book. Great story and great narration. Based on that alone, it's a 5-star. Don't overthink this, you don't need a long thoughtful review. If you love sci-fi/fantasy just get it. Put it in your basket and click purchase!!! And you can thank me later.

I'm halfway through and can't get enough. The writing is fantastic and the narration powerful. If you like the Vikings TV show, this is a fantastic backstop. Lots of battles and explanations of the power of the Nordic Gods.

I wondered how I'd cope with 90 hours of a story with a single narrator but, it's been an absolute pleasure to listen to!
The narrator is outstanding and, when he's portraying women, he doesn't go OTT and make them sound like pantomime dames. He puts force and feeling into every character, just where the emotion should be.
The story is brilliantly written for the most part, with only one book letting it down, with a series of flashback-type storyline that male it difficult to keep up with. Luckily, that's just one of the many parts, and the rest are fantastic.
This is, without doubt, the best value ebook on the market and was a credit well spent. 👏

really enjoyed listening to this book

Narrator brings life to the book, helped me stay interested.
I listen to books while working, and books like this 80hrs+ really help.
the book brings the gods of asgard into a new perspective,
a great listen and highly recommended.

Transport yourself to the nine realms

What a fantastic listen.... brilliantly written and superb narration!!!!! I couldn’t get enough and 90 odd hours flew by, I will probably listen again as I didn’t want it to end

A while ago, on an older account, back when these books were grouped into 3's, I listened to the whole series (even the last 3 which were sold individually) and thus when I spotted all 9 for a single credit, rather than lament, I jumped at the chance to buy them again. The plot was familiar enough to ring true to other stories of Nordic legend, but with a tremendous amount of artistic variation to make them seem like brand new stories. Each book could easily work as a stand-alone book, while the whole links together into a sprawling saga actually worthy of using the word "Epic" to describe. The narrator is also perfect for this type of story, his accent is just right, with the right amount of Scandinavian twang to give him the air of a skald, and the right amount of clearly spoken English to be able to listen to for the whole eighty-something hours taken to tell the story to its climactic conclusion.
Praise to the author-Matt Larkin
Praise to the narrator-Ulf Bjorklund
and praise to the all-father-Odin.
*sidenote* Thor is a dick and Loki is awesome. Sit back. relax, and immerse yourself in some excellent tales of Nordic legend.

I was about to dip a bit into the norse / northern mythology when I noticed this 90 hours collection by pure chance. After passing the better part of Apples of Idunn I could not believe to enjoy the story until the doom suggested just by the covers of the later books. At the beginning, I desperately wished for Odin to remain the humanly good god. As the whole story unfolded I was lead to accept the Urd.

Among the books, there was a slight drop around books 4 and 5 - they were a bit too jumpy for my taste. If I understand well, the whole Runeblade saga (not included in these nine books) happened between 3 and 4 and this was probably the way to connect those two back. Hold on, it's worth it and getting better again :)

My biggest surprise of all this was Thor; I found his life especially hard in these books. I wept at the very end.

"We are all dead" rings in my ears and I smile, remembering the great time of listening to this story.

Well, now it's Neil Gaiman's time and then maybe some Edda or the more serious sources. I find reading about the Norse mythology elsewhere way easier now than before, so this definitely worked well as the introduction.

I am absolutely hooked on this I can't wait for more, the narators voice is perfect and the voices he puts on clearly signify who is talking.

really great way of telling the story of Odin. done in a way I have not come across before