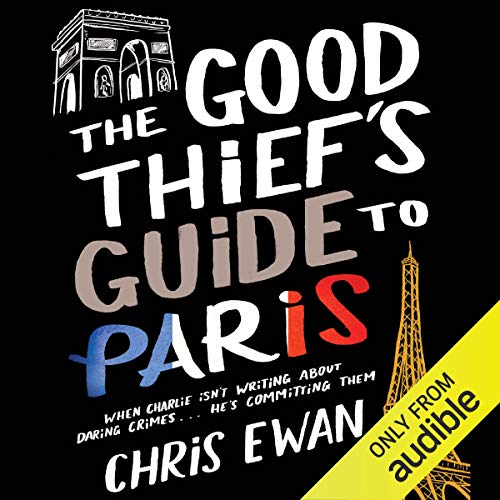 Good Thief's Guide to Paris, The

Charlie Howard - mystery writer and professional thief - is flush with the success of his Paris book reading when he agrees to show a novice the basics of his other trade by breaking into the man's own apartment. Trouble ensues when it turns out the apartment belongs to someone else. The next day, Charlie's fence hires him to steal an ordinary-looking oil painting - from the same address. Mere coincidence?

Charlie reckons there's no harm in finding out - until a dead body turns up in his living room. Hiding in a Montmartre hotel, Charlie tries to work out how to save his skin, while also placating his agent, Victoria, who has arrived unannounced in the mistaken belief that Charlie actually looks like the author photo he provided.

Art theft and murder in Paris, what else?

This was fantastic. I get a kick out of the unusual perspective on a mystery - burglar/crime writer obliged to aide in an art theft and solve a murder in order to clear his name of said crimes. Loved the tid-bits and insight on security and his other commentary throughout. Not only were there some interesting and colorful character portraits, the city was nicely portrayed too - having now been there and seen many of the sights described, it was easier to follow his progress through the streets and landmarks, but even those which were not familiar to me were brought to life, from Montmartre to the wasteland banlieu.

A great tangle of mysteries too, burglary turned art theft, turned murder... all kinds of trouble. I had not seen the twists at the end coming, though, in retrospect I might have caught one or two of I'd paid a bit closer attention, but by the time he discovered the forgery, I was just enjoying the ride. I think his relationship with his agent Victoria has got to be the most unique I've ever read of, and I was entertained that she morphed her role willingly from listener/counselor to being an active participant in helping Charlie pull off parts of his scheme. I don't know that he needs her as a full time sidekick, but I hope she keeps her role as a resource for him.

Narration was fantastic. English and French accents mostly this time, both male and female voices were done well, and dialogue was always consistent. Vance's tone and rhythm matched that of Charlie's voice and attitude very well, to my mind.

I look forward to the next adventure and new city!

This is the third book I have listened to in this series. The main character is likeable and this is a very easy listen.

A good novel for flavor, but anytime the police can be counted on not to check the fingerprints of a murder victim is the time we can claim a story has serious plot problems. This brought my rating down half a star.

Loveable Rogue lead character - a writer, thief and reluctant detective who frequently gets into difficulties takes the reader on a roller coaster ride through the streets of Paris and the criminal world. Impressive and believable dialogue and plot throughout and lots of twists and turns to keep the reader guessing.

The narrator brings life and believability to all of the characters and makes this audio book a real pleasure to hear.

As someone who is much travelled myself this book really brought to life the nuances of being in Paris. This combined with the mystery element and glimse into the criminal world provides a compelling exiting read and which is
why this series of books has rapidly become my current favourite. Really looking forward to hearing the next one "The Good Thief's Guide to Las Vegas"

I read the first one in this series and having enjoyed it, switched to audio for the second - and I was very pleasantly surprised. It's quite a clever, exciting murder-mystery but without those interminable fight/chase scenes which crop up in other books. The narrator was older than I expected (unsure why I expected a younger man) but that worked well. I'm off to get the next in the series...

The Thief of Time

If you could sum up Good Thief's Guide to Paris, The in three words, what would they be?

The hero's flaws and bad choices just make me want to find out more. He's a bad liar, a bad womaniser, a bad drunk and bad at accents, but a good thief.

What does Simon Vance bring to the story that you wouldn’t experience if you had only read the book?

I felt that the narrator delivered the humour and the depth of the performance better than my own inner voice.

When Charlie found the corpse in his flat. Set up (again). Doh!

The author has the hero covering lots of the options that this reader could think of (and many I hadn't thought of). Nice to feel stretched by this 'read'. Despite having other books on the go, this quickly became my main listen.

I am really enjoying travelling around the world by listening to this book. I highly recommend