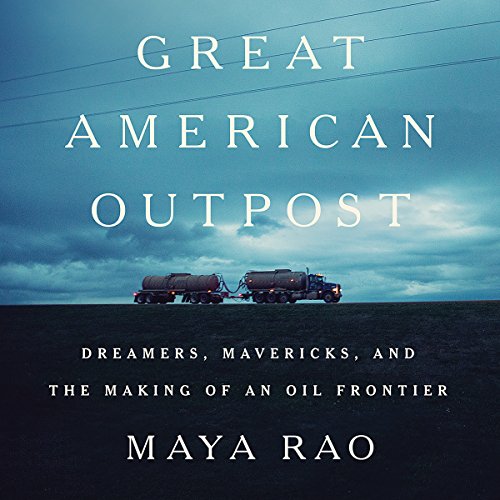 A surreal, lyrical work of narrative nonfiction that portrays how the largest domestic oil discovery in half a century transformed a forgotten corner of the American West into a crucible of breakneck capitalism.

As North Dakota became the nation's second-largest oil producer, Maya Rao set out in steel-toe boots to join a wave of drifters, dreamers, entrepreneurs, and criminals. With an eye for the dark, absurd, and humorous, Rao fearlessly immersed herself in their world to chronicle this modern-day gold rush, from its heady beginnings to OPEC's price war against the US oil industry. She rode shotgun with a surfer-turned-truck driver braving toxic fumes and dangerous roads, dined with businessmen disgraced during the financial crisis, and reported on everyone in between - including an ex-con YouTube celebrity, a trophy wife mired in scandal, and a hard-drinking British Ponzi schemer - in a social scene so rife with intrigue that one investor called the oilfield Peyton Place on steroids.

As the boom receded, a culture of greed and recklessness left troubling consequences for investors and longtime residents. Empty trailers and idle oil equipment littered the fields like abandoned farmsteads, leaving the pioneers who built this unlikely civilization to reckon with their legacy. Part Barbara Ehrenreich, part Upton Sinclair, Great American Outpost is a sobering exploration of 21st-century America that sounds like a frontier novel.

"I'm grateful for this stunning work of immersive reportage. Maya Rao tells us a tale from ground zero for modern American capitalism: the North Dakota oil rush, from boom to bust. It's a remarkable book for right now, mixing compelling portraits with smart, big picture analysis. Rao shows us stories that visiting reporters would likely miss, and the result is a rich, nuanced book that's a crucial guide to understanding twenty-first century America." (Tracie McMillan, author of The American Way of Eating: Undercover at Walmart, Applebee's, Farm Fields and the Dinner Table)

"An important addition to the literature of the U.S. shale revolution-too often underestimated and misunderstood-Great American Outpost reminds us that the revolution is not just a story of frack fluid and oil production but a story of the human experience. Through Didionesque scenes of the North Dakota boom, Maya Rao evokes America in extremis with glimpses of lives and decisions that are sometimes frightening, sometimes inspiring, and sometimes just nuts." (Gary Sernovitz, author of The Green and the Black: The Complete Story of the Shale Revolution, the Fight over Fracking, and the Future of Energy)

"Maya Rao didn't just write about the boomtown life, she lived it capturing the hope and despair of a nation of citizens looking for a break. A gimlet-eyed look at the oil, dust, and, most importantly, the people living on our country's last frontier. This is essential reading for anyone interested in how the American Dream or the American Nightmare can be made and lost in the blink of a two-week pay period." (Stephen Rodrick, contributing editor to Rolling Stone)