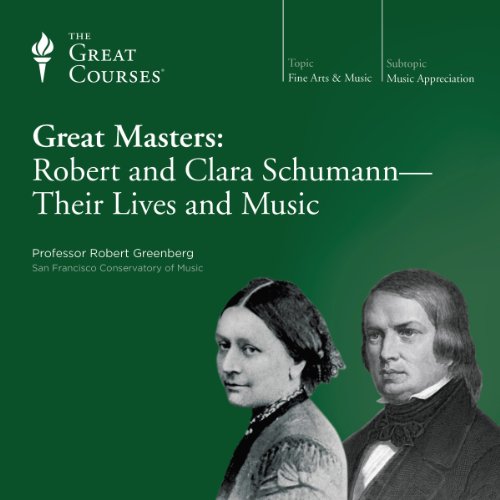 Great Masters: Robert and Clara Schumann - Their Lives and Music

In all the annals of Western music, there has never been a couple like the Schumanns: he a pioneering critic and composer (the only ever to achieve greatness as both), she one of the leading concert pianists of Europe, as well as a composer of no small talent herself.

This series of eight lectures by an award-winning composer and acclaimed teacher includes excerpts of works by both of the Schumanns as part of an introduction to an extraordinary couple and the musical legacy left to us in spite of the difficulties that dogged their marriage. Though a loving one that produced eight children, their partnership also had to withstand the pressures of raising those children, managing two careers, and overcoming the tensions posed by Robert-an emotionally unstable man who alternated between manic bouts of awesome creativity and terrifying fits of depression, exacerbating the worsening effects of the syphilis that would eventually kill him. His death left Clara to not only raise the children but also to support the family through an exhausting schedule of concertizing. Despite his ill health, Robert still left behind a magnificent legacy of compositions and insights into music that you explore in these lectures-a legacy that included his return to criticism so he could introduce to the world a then-unknown Johannes Brahms.

What listeners say about Great Masters: Robert and Clara Schumann - Their Lives and Music

This lecture has it all domineering father making his money from his daughters talents. Sound just like some the child stars of our lifetime. Husbands jealous of his wife's talent and career. Stories of the stars hob nobbling together. What more could you ask for?
And the music oh the wonderful music and history about how it was conceived and composed.

This is my fourth lecture in this series hope to listen to them all before years end.

Greenberg can be hit and miss. This is a BIG miss. This is the first Greenberg course that I had a very hard time finishing. You can nearly hear the sipt hit the microphone at every turn of each over the top phrase. Frankly, it's hard to focus on the subject when the lecturer sounds like he's in argument over splitting the bill with a bunch of friends at lunch.

I gained some knowledge from the course but will need to either try to get through it again or find a book on the Schumanns.

I loved Greenberg's How to Understand Opera. So, I'm not totally down on the guy but this course is terrible. Sorry.

A wonderful survey of Robert and Clara Dchumann

As always Dr. Greenberg takes a compassionate, respectful and I believe accurate survey of the lives and works of Robert and Clara Schumann. I also enjoy the humor Dr Greenberg brings to all his courses. Since Felix Mendelssohn was such a major influence in their lives and fortunes I wish Dr Greenberg would do a course in this other wonderful complex musical couple Felix and Fanny Mendelssohn.

I really can’t get enough of these awesome classes by Professor Greenberg. Audible may have to add an extra star or two so these can be properly rated—they are fantastic in every way! Highly recommended!

the accompanying PDF is the best thing.

the pdf makes it easy for me to absorb the material in this course. thanks