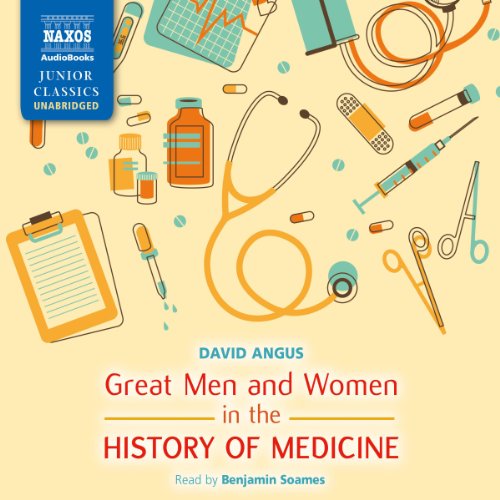 Great Men and Women in the History of Medicine

Illness, disease and injury prompted the development of medicine from the earliest days of mankind: useful herbs, methods for treating wounds and even setting bones were passed down the generations by word of mouth.

With the growth of civilization came more scientific methods, generally discovered by significant individuals. This informative and entertaining audiobook presents the major figures in the history of medicine, from Hippocrates in Ancient Greece to the Roman doctor Galen and the medieval abbess Hildegard of Bingen.

It also explores the Arabs Ibn Sina and Al-Razi and the start of major anatomical investigations during the Renaissance by Andreas Vesalius. The furtherance of medical knowledge grew quickly from that point with William Harvey (the circulation of the blood) and Edward Jenner (inoculation); there was growing awareness of the importance of cleanliness to prevent infection, and the discovery of penicillin and DNA was soon made.

A through trip of Western medicine, from ancient Greece to today's use of patient cells for transplants. Very pleasantly, each era introduction is accompanied by period music.

Best book I have listened to in years

I loved the quality of narration and the background music, which made me feel like I’m in a museum tour with my own personal guide. Very easy to listen to and follow. I enjoyed how the story smoothly unfolds through history. I’d recommend this book to anyone who has an interest in some of the key events that shaped current medical practice. I learnt easy facts that I look forward to sharing. I have re-listened to this book 3 times already, and I’ve never done that before with any other book! Enjoyed enough to be motivated to write this review, my first, because all those involved in producing it deserve the recognition and praise, and I hope potential new listeners will enjoy it as much as I did. I’d love to come across more Audible books like this. Overall, excellent.

Nice little book full of interesting tit bits. About Great men and women in the history of medicine. Probably meant for younger readers or those who like a easy read but still interesting. Covering areas like;

Where the snake and staff on medical building come from,

And how Alexander Fleming messiness helped with discovering antibiotics.

Excellent flow, providing brief accounts of the pioneers of medicine and how they made their discoveries.