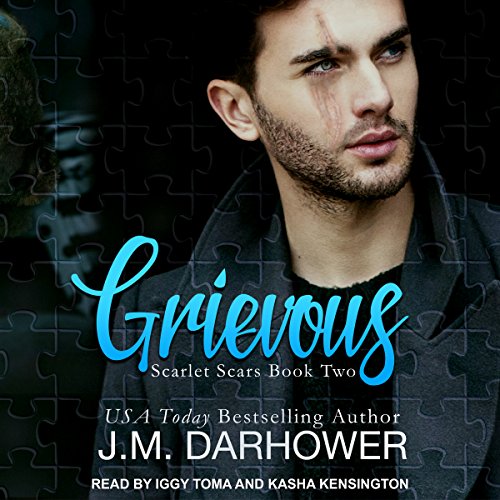 Once upon a time, there was a girl who stopped believing in fairytales after her innocence was stolen.

Morgan Myers is tired. So damn tired. Most people either push her around or brush her off, and she's not putting up with it anymore. Determined to reclaim the life that had been stolen from her, she puts her trust in the last person she ever expected to: the notorious Scar. Morgan sees a side of him that few people seem to know - the man, not the myth. Lorenzo. And what she sees, she likes, a lot more than she thought she would.

But fairytales aren't real, as life likes to remind her. Some dragons, you just can't slay, no matter how hard you fight them. And when hers comes back around, breathing fire, she's forced to face some unimaginable horrors. But lucky for Morgan, there's a white knight in combat boots out there that isn't afraid of monsters.

You see, it's impossible to be afraid of something you face every day in the mirror.

What listeners say about Grievous

I listen to a lot of books, and even those that Ive loved in the past can not compete with these 2 books. They are perfectly coordinated. From the book cover looking exactly like I would have imagined him, to the most spot on narrators playing their roles perfectly, and finally- a really well written story. This tale straddles the lines of several genres, and does it with perfect balance. The romance is heart warming without being mushy, the sex is hot but not on every other page, the action is constantly moving but you never get lost.
Also, if you have a dry sarcastic sense of humor, you will find yourself laughing throughout both books. It's the ridiculous juxtaposition of a killer who can't get his straw into a Capri Sun. Or the insanity of a hard core mafia type killer who raised a brother that is totally straight laced. It leads to many laughable moments. I totally recommend that the stories be read in order. Heck, just read them!

This is book two which begins where the cliffhanger ending of book one leaves off. It gives a good summary of book one, but book one is so worth a listen!!! I recommend listening to book one first (but it is not really necessary).

In general, I do not care for cliff hangers. As book two was available when I read book one it was not a big deal for me. I immediately listened to book 2 in the series.Lorenzo and Scarlet begin to accept their life together .... although it is not a &quot;defined&quot; relationship as such. There are two broken people trying to cope in the violent world they were forced into.

Iggy Toma's performance made it a worth while listen. This series is the first time I had heard his performance and I will be sure to look for him again. He brought sarcasm and wit and developed Lorenzo's character brilliantly. I used a credit for both books and do not regret it! This story line checked all my boxes, strong female lead, excellent narration, well developed story line with a twist ...... I will look for this author again!

I was really surprised how much I liked these books! There was actually a storyline instead of it being nonstop sex that you hear over and over again in every other romance genre. Lorenzo kept me smiling and laughing until the end. I’m going to miss these two characters!

Book 2 was just as good as the first. This one had some twists that I didn’t see coming! Love how the second book wrapped up everything. With some romance books I feel like you don’t get a ton of backstory with the characters and you feel like you don’t get to know them as well. These books I felt like I really knew Lorenzo, Morgan, even some of the others! The one downside is that I would have loved to see what happened to Seven after everything that went down! Maybe he will appear in his own story one day?? Anyway, I would definitely pick these books up again in the future. 5 stars!! ❤️

This is so good! Loved the banter and the wounded characters. Not to mention the happily ever after!

What an awesome sexual & violent book. Narration was spot on. Lorenzo’s parts had me laughing each time, especially in regards to the puzzle closer to the end. I highly recommend this book, as well as the first one in this series. Now, I’m on to another book by this author and an orange.

OMG so amazing. Amazing narration. Amazon characters. I so enjoyed this one. Did not want to stop listening!

The second portion of the series is just as good as the first. Still breaking the 4th wall and still with irreverent humor during Lorenzo's parts.

The love Lorenzo and Morgan have isn't for everyone, after all he is rather insane and likes to antagonize her, but she gives just as good as she gets.

One thing that bugged me though was how stupid Morgan was while being held. She claimed that she would never be broken but there is a difference between being broken and being stubborn to the point of being suicidal.

Once again the narrators were amazing in their voices.

I love it all. Freaking amazing.

Best protagonists ever, as I said in my review of the first book. First of all, I loved that Morgan said in the book that Lorenzo doesn't complete her, that she's a whole person on her own and would be able to breathe without him,, but the thought of it makes her cold inside. I just loved that the author didn't turn her into a woman that had to depend on her man, that thought of herself as half of a person without him, because I used to be that person and it took me a long time to work on myself and get to the point where I realized that I'm not half of a whole and don't NEED a man. Morgan was such a strong female, I just really liked her. It's hard for me to decide if I liked her or Lorenzo more, because he was so freaking interesting in so many ways! The backstory, the puzzle thing (I do puzzles too so it was kind of funny to hear about this tough guy doing puzzles), and his total inability to deal with any feelings whatsoever. His dark humor and obsession with Star Wars was also hysterical, and I loved that cynical, bleak humor he used throughout these books. Not to mention, the narration was FANTASTIC. I gotta say, both narrators were just killing it, but Iggy Toma in particular was just.... unbelievable. His inflections, his tone of voice, his volume, just everything about it was perfect. It felt like we were really hearing someone tell us their story. He somehow read like he was just talking to a normal person in a normal way and I was truly impressed by the great job he and Kasha Kensington did narrating the books. The very last thing I want to make sure I mention is the writing. It was superb, and I loved the way the author didn't make it take the typical route after the big "boss fight" with "Jabba" as Lorenzo called him. This one will stick with me for a while because it was so good and I really recommend it!

This was a good read, or listen.
I really enjoyed Lorenzo, his character is what made me listen til the end. Of course he was a lunatic and oddly strange. Even still the intensity of this duet was really incredible.

Oddly enough the female character wasn’t my favorite. She bothered me. Lol
I also needed to play her parts at a faster speed because she dragged everything out.

CAN YOU BASK IN A BOOK?

Can you bask in a book?

Honestly I sat there, laid there and listened to this on audio and I just didn't want it to end.

Grievous is the second book Conclusion to Menace.

In Grievous Lorenzo continue to have that crazy intense and passionate connection.

I enjoyed the transition of Lorenzo going from hard boss to hero.

I loved the journey the characters take in this book, the battles the characters faced and still face that leave them marred and not without mental and physical scars but the crescendo to the hea satiating.

I enjoyed everything about this story, the thrill, the anticipation, the characters, the villains, the ending.

Lorenzo is the kind of character with a hardness, a man of little emotion, a man who is feared and without meaning to be at times he is so damn funny and you could say he's a smooth criminal, I loved him.

Scarlett as Lorenzo calls her or Morgan is feisty, a woman with backbone, a woman who has been through so much in her lifetime and still she stands tall and continues in her quest to find her daughter while she herself is being hunted by a Russian mafia boss.

J.M Darhowers Writing is impeccable with a plot that is unpredictable and gritty at times. I love mafia romance and this is absolutely brilliant I loved every moment and can't wait to read more from this audio.

like I said; I listened to this on audio, these narrators are absolutely brilliant and really bring the characters to life, Lorenzo sounds smooth, hot, I loved his sarcasm and the way he plays any acts of niceties off. Lorenzo is a villain who in the end becomes a hero. I think I got more out of this book by listening to the audio version so I recommend it.

A Brilliant and recommended duet for any Mafia romance lovers.

Contains plenty of hot scenes, has an element of darkness and grit, is told in first person dual pov and leads to a hea.

I enjoyed both books in written form very much, but the narrators made this a whole new experience for me. The male narrator captured Scar's wit and sarcasm brilliantly.