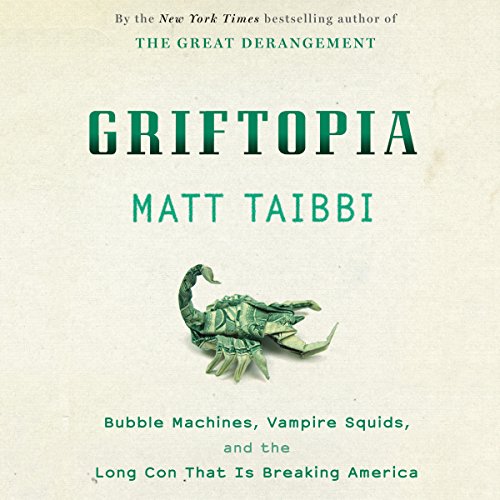 The dramatic story behind the most audacious power grab in American history.

The financial crisis that exploded in 2008 isn’t past but prologue. The stunning rise, fall, and rescue of Wall Street in the bubble-and-bailout era was the coming-out party for the network of looters who sit at the nexus of American political and economic power. The grifter class - made up of the largest players in the financial industry and the politicians who do their bidding - has been growing in power for a generation, transferring wealth upward through increasingly complex financial mechanisms and political maneuvers.

Rolling Stone’s Matt Taibbi here unravels the whole fiendish story, digging beyond the headlines to get into the deeper roots and wider implications of the rise of the grifters. He traces the movement’s origins to the cult of Ayn Rand and her most influential - and possibly weirdest - acolyte, Alan Greenspan, and offers fresh reporting on the backroom deals that decided the winners and losers in the government bailouts. He uncovers the hidden commodities bubble that transferred billions of dollars to Wall Street while creating food shortages around the world, and he shows how finance dominates politics, from the story of investment bankers auctioning off America’s infrastructure to an inside account of the high-stakes battle for health-care reform - a battle the true reformers lost.

Finally, he tells the story of Goldman Sachs, the “vampire squid wrapped around the face of humanity”.

Taibbi has combined deep sources, trailblazing reportage, and provocative analysis to create the most lucid, emotionally galvanizing, and scathingly funny account yet written of the ongoing political and financial crisis in America. This is essential listening for anyone who wants to understand the labyrinthine inner workings of politics and finance in this country, and the profound consequences for us all.

What listeners say about Griftopia

While some people will take issue with the first chapter; I think Taibbi hits on something I've suspected for some time now. The fact that our mainstream news and debates are more or less meaningless or nonsense. Many people like to focus on Fox News as being so biased, but really they are just the logical progression of what most of the news has become.

To this point, I found the chapters about the commodity bubble the most interesting and revealing of how much we are all suckers. I don't remember any debate from Obama or McCain about the issue of speculation in regard to the price of gas during their campaigns.

This book added to my understanding of what is happening to America, like Todo pulling back the curtain in the Wizard of Oz, but it also organized and expressed many of the thoughts that have been dancing around at the back of my head about our political system in a irreverent, witty, and coherent fashion. Thank you, Mr. Taibbi for saying f***k you, when I can not.

Razor-sharp wit cuts through the clutter

I've enjoyed Matt Taibbi's appearances on television and some of his Rolling Stone writing, but had not had the chance to read his books. I looked forward to the release of this one, and wasn't disappointed, ordering it the day it was released and listening to it in long installments thanks to the Washington traffic.

Taibbi skewers both political parties and the entire media establishment for the mindlessness of what passes for discussion of what's happened to our economy since September, 2008, and before.

We're treated to a hysterical Taibbi review of the maiden voyage of USS Sarah Palin at the GOP National Convention (her hair in a bumpup that looked like a Flight Attendant for Piedmont, in a dress that screamed Wal-Mart Halloween Costume for angry white middle-aged female), then introduced to the events that were even then unfolding, without our knowledge, as our economic system was forever changed.

He actually got me to understand what a credit default swap is! It's a simple, easy-to-understand guide through the impenetrable gobbledeegook of Wall Street, and an indictment of all the media who haven't told us much of anything -- and of the politicians in both T-Shirts who want to keep it that way.

Read it. I enjoyed it very much. Congratulations, Matt Taibbi, and thank you for helping us understand.

I can't say anough about this honest portrait of the our recent economic crisis. Brilliant. And he swears a lot which I like.

I love this audio book. The things you will learn about the world, the economy, politics and business are amazing. There are twists and turns, humor, and good explanations that will leave you shocked and surprised. Narration is very good. Could not put it down. Excellent.

Would you try another book from Matt Taibbi and/or Patrick Egan?

Yes--Taibbi's reporting is always informative and often funny, if a little dense. You have to have some grasp of financial industry jargon to understand everything in the book.

The methodical revelation of the financial sector's vice grip on the U.S. political system.

Who would you have cast as narrator instead of Patrick Egan?

Probably. Could be an upsetting but also head-shakingly funny documentary.

I've read many books on the financial crisis and so far, this one has been the most interesting.

Could cause an aneurism or even stroke

This is classic Matt Taibbi. He is not afraid to use blunt, honest, language. Such as calling the individuals who nearly caused another Great Depression a variety of terms never heard from journalists or the pundit class except when attempting to smear members of the other political party.

Having read other books on the recent financial crisis (e.g., "The Big Short") I thought I had a good understanding of the underlying causes and perpetrators. But listening to Matt's account I found myself occasionally sounding like a sufferer of Tourette syndrome as I learned new details about how the amoral, greedy, stupid "masters of the universe" at AIG, GoldmanSachs, et. al. nearly destroyed the world.

Buy a copy for yourself and another for your Tea Bagger family member or friend.

I've read some Taibbi - and he's a frustrating read. For example, the reviews above this are *both* correct The best thing about Griftopia is also the worst: Matt is now so entrenched among the "common person," he has lost perspective of where we are as readers. Taibbi does a great job of decoding some bank "definitions" and moves. And at the same time, Matt is close to Lewis Black inasmuch as his opinions come through in ways where I ask: MATT, next book, just write from the gut, and make the issue your OWN. In other words, Taibbi has strong and ultimately interesting - but he is slippery where fact meets opinion. What a relief from the glut if taking the banking establishment too seriously. Is he right about Ayn Rand and objectivism? He made me think - which is what one gets in only the best of books. MOST EXCELLENT: he reads it.

Excellent book, a must read/listen!

The book provides insight into the inner working and corruption at the heart of our financial and political institutions. The facts in some chapters might make your skin crawl at times but it is better to know.

The joy of being scared

This book is brilliant. Matt Taibbi's rants directred toward Alan Greenspan was one of my favorite sections of the book. The further you go in this book, the more it reminds me of a well staged horror film. You're terrified by the greedy hacks that control our economic and social life, but you can't turn away, you're forced to listen to the unraveling of a once great nation. But don't get me wrong, this is a very funny book and anyone who's interested in the 2008 meltdown should read this. (or listen).

Essential listening for anyone who really wants to know who and what caused the financial crisis of 2008. Lifts the lid on who really runs the show in the US (clue - its not the Government) and why they continue to get away with it.

Loved the analysis on the banks

First few chapters on tea party I could do without. I hope he writes another book ten years on about the banks and what to do with them. Perhaps look at solutions like breaking up the investment banks like fdr. We need to keep shining a spotlight into the banal darkness to expose and not forget what the creatures of darkness are up to.

Taibbi is a great communicator and does an excellent job here of translating all the confusing & misleading jargon we hear about economics & finance into language that the public can understand. In each chapter he focuses on one of the different ways in which the American public are ripped off by their friends on Wall St. This includes the bank bailouts of the 07/08 crash, the mortgage scams which contributed to the crisis in the first place, commodities trading & the insurance industry. Special scorn & attention is reserved for Goldman Sachs & the one time Federal reserve chairman Alan Geenspan. Not many people have Taibbi's ability to research a complicated serious subject and make it interesting & comprehensible to the public and entertaining where possible. He doesn't come up with solutions to the underlying problems of corrupted, ineffective democracy. But to be fair to him he doesn't set out to do so. Reporting the world as it is, is a most valuable service in itself.