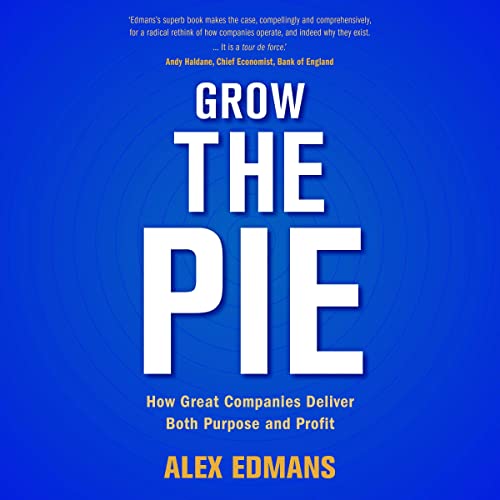 What is a responsible business? Common wisdom is that it's one that sacrifices profit for social outcomes. But while it's crucial for companies to serve society, they also have a duty to generate profit for investors - savers, retirees, and pension funds.

Based on the highest-quality evidence and real-life examples spanning industries and countries, Alex Edmans shows that it's not an either-or choice - companies can create both profit and social value. The most successful companies don't target profit directly but are driven by purpose - the desire to serve a societal need and contribute to human betterment. The audiobook explains how to embed purpose into practice so that it's more than just a mission statement, and it discusses the critical role of working collaboratively with a company's investors, employees, and customers.

Rigorous research also uncovers surprising results on how executive pay, shareholder activism, and share buybacks can be used for the common good.

What listeners say about Grow the Pie

Alex is a brilliant author. He gets across academic rigor in a down-to-earth manner. I love all the examples that he provides. It gets the meaning across super clearly. I highly recommend this book to anyone.

A book for our times - all should listen to this

Once in a while, a business book comes along that captures the mood of the times that you just know will shape debate. “Grow the Pie – How Great Companies Deliver Both Purpose And Profit”, the superb new book by Alex Edmans, is such a phenomenon.

Alex Edmans, a Professor of Finance at London Business School who has spoken at Davos and given the obligatory TED talk, is a serious man. And this is a serious book that demands to be read and debated by all who recognise that the form of capitalism practised for the last 40 or 50 years is in serious need of revision.

These days few people seriously argue against this: the problem is coming up with reforms that work and can be supported by wider society. Alex has weighed in with a serious contender for this mantle; he assiduously lays out what businesses can and should be doing, and is not afraid to ruffle feathers along the way if this is where the evidence points.

Notwithstanding the somewhat title of “Growing the Pie” (as Alex himself says you will either love it or hate it), Alex has written a learned, but ever-readable book, that goes to great lengths to look objectively at the evidence - and evidence is really important to Alex. The good news is that he concludes that businesses can be true to their purpose, benefit society and generate strong, sustainable profits at the same time.

If this win-win thinking seems too good to be true, Alex demonstrates that it's not if we rigorously examine the evidence which sometimes means letting go of some shibboleths beloved by people advocating for the reform of capitalism - more about this in a moment. Alex advocates that boards need to adopt a decision-making framework that supports what he calls “growing the pie”, of growing an organisation’s social value. A “pie growing mentality” is fundamental: it means decision-making by organisations should focus on creating value in a way that means everyone - shareholders, employees, customers, suppliers, the environment, communities and taxpayers - can all have a larger slice of the pie; all can benefit to some extent.

The pie represents social value, not profits, which are but one slice of the pie. Importantly, profits are a by product of increasing the pie, of increasing and organisation’s social value. This does not mean boards should support everything that creates value; there will need to be trade-offs and some of them may be painful to certain stakeholders. Decisions will in effect need to satisfy a “value for money” test, meaning there will be losers as well as winners. Businesses need to make their decisions using a framework that recognises their comparative strengths as well as recognising that not all stakeholders are created equal – some stakeholders will be more material to the business than others. The material stakeholders will be those for whom the organisation exists - the “who we exist for” question being one of the two dimensions of “purpose” (the other being “why” an enterprise exists).

“Pie growing” can be contrasted with what Alex refers to as “pie splitting”, this being where parties compete to increase their slice of the pie – to make their slice bigger than someone else's. This is perfectly rational behaviour if the pie is fixed in size and does not grow, but Alex's book proves that the pie – the social value of a business - is not fixed in size and can be grown significantly if the right decisions are made. And as noted above, increasing the size of the pie benefits everybody - benefiting all stakeholders in absolute terms even if some end up with a smaller percentage of the pie. This is not as obvious as it might seem. Alex points out that high profits generated by business need not necessarily have been made out at the expense of some stakeholders (e.g. customers, employees and the environment), and that it's important to look at how the how at the high profits arose.

If investigation showed that the high profits were generated over the long-term, this would indicate the business in question “grew the pie”, perhaps by making products that benefitted customers, and/or that provided employees with an enriching place to work and/or that renewed the environment for future generations. The point, as Alex points out, is that if society is conditioned to have a pie splitting mentality - which will be the case if it always views profits as having been made at the expense of stakeholders - you have a situation where success is a liability if profits become large enough to be deemed excessive. But as Alex rightly says in his book, delivering high profits need not be shameful – it's failing to deliver profits and social value that is.

The need for commercial businesses to make profits is runs throughout this book, and this more than anything perhaps distinguishes it from academic works of some of Alex's contemporaries. Alex never loses sight of the need for profits, and that without sustainable profits businesses will simply cease to exist, and will cease to contribute anything to society. In fact, it's fair to say that Alex feels many investors get a raw deal from many people advocating for purposeful businesses.

Profits are a critical function of an organisation’s purpose, and Alex is not afraid to say this. In fact Alex is not afraid to say anything if evidence supports or disproves something, however uncomfortable this may be. For example, many people will be shocked, not to say disappointed, to discover that Alex's research supports in some circumstances high executive pay, shareholder activism and share buybacks. That's not to say that Alex unequivocally supports these activities – in each case it depends on the circumstances and how organisations approaches these. But the point is that they are not they are not intrinsically “bad”.

If there's one criticism of Alex's book, it is perhaps the absence of an ethical and moral dimension to the way businesses operate. Even if, as Alex rightly says, the staggering sums paid to CEOs are statistically insignificant when measured against enhanced profits that CEOs generate through their expertise, society still needs to view these as “fair” when considered against the hardships many people will be facing. Alex says that fairness should be viewed in relation to performance, and that if a business outperforms the market because of the decisions of it CEO, then people should view this as fair, but I’m not so sure.

All in all, Alex's new book makes a hugely valuable contribution to the critical ongoing debate on the purpose of businesses, and how businesses can contribute to the betterment of society. The book demands to be read by everyone who cares about the future of business; if people want to argue against Alex's findings, and some will, let them - but let them also produce the evidence to support their arguments.

Such great book and guide for a highly controversial topic

Purpose is becoming a hype word in the business world with a few really know what’s it all about and how it is different than CSR. So, I was extremely happy to find such a book written by a Professor of Finance. It shed light to a lot of questions I had in mind about the topic. Although there were so many supportive research around the topic none to little was comprehensive enough to prove that purpose may add to the business.

A must read (lìsten) book

My title says it all. I listened then bought the book. Excellent!! The narrative read by the author carefully set out to explore the balance between profit and purpose. The conclusion was very clear, eloquently described and compelling.

It provided such detail that simply listening was not sufficient to satisfy my hunger to unravel the underlying detail.

As Alex might say "In a nutshell", Profit recorded through simple (and complex) but narrow financial models, delivered without a wider passion for benefiting society as a whole, will fail to deliver the sustainable and consistent returns for all, if not driven by clear purpose.

This is a great book on how to put the purpose back into the capitalism. This is a clear and inspiring story on how to use value based approach to create a more inclusive form of capitalism that will benefit not only stakeholders but the society at large.