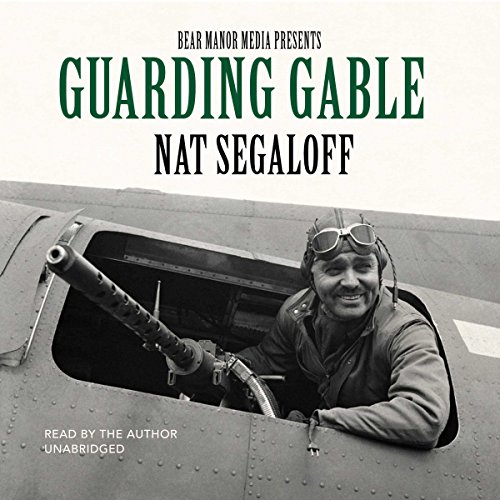 Guarding Gable - an original audio novel by Nat Segaloff - starts with an actual event in the life of the screen's number one star and becomes a story worthy of a Hollywood movie. It's 1942 and World War II is just beginning. Beloved actress Carole Lombard is killed in a plane crash while returning from a bond-selling tour and her husband, Clark Gable, is beyond consolation. Depressed to the point of suicide, he enlists in the US Army Air Corps, telling his bosses at Metro-Goldwyn-Mayer that he doesn't care if he ever comes back. Naturally, MGM is apoplectic at the prospect of losing its top box office attraction. In desperation, studio head Louis B. Mayer leans on a lowly publicist, Alan Greenberg, to enlist with Gable with orders to keep him alive during World War II. That's hard to do when Gable insists on flying combat missions over Nazi-occupied Europe. Not only that, he and Alan fall in love with the same woman - and, if you're Alan, how do you win the girl if your competition is Clark Gable? Guarding Gable is a story of love, war, and humor. This "enhanced" audiobook combines narrative with sounds of war, environments, and excerpts from the training film that Gable made while reluctantly grounded.There's also a little rough language; after all, this is the Army. Guarding Gable runs approximately five hours and is told and produced by the author, Nat Segaloff. It's a special presentation by Blackstone Audio from Bear Manor Media.

This unwinds like an old-fashioned movie, with adventure and plenty of fast-paced banter. If you like romance, movie stars, action, and a narrator who can convey all of the above, then tune in. I am looking forward to more novels from Nat Segaloff!

An intriguing fiction based on fact

After Clark Gable’s wife, Carole Lombard, died in a plane crash while touring to sell war bonds, Gable decided to enlist in World War II. His studio, MGM, was dead set against it, but he insisted. As an insurance policy, MGM made cinematographer Andrew McIntyre enlist with him, to keep an eye on him.

Nat Segaloff’s lively story changes Andrew McIntyre into studio publicist Alan Greenberg, a semi-shady character with his own story to tell, and he narrates the novel. Aside from the Greenberg character, the story is almost entirely true, and it’s a fascinating, sympathetic look at Gable the man and Gable the movie star, as he tries to contribute to the war effort in England.

The novel grips you from its opening, and moves briskly through the events of 1942-43. My only regret is that it wasn’t longer—I didn’t want the story to end.

Before you buy this book make sure you can hear it. It was not until AFTER I bought it that I was told it would not play on my iPhone because it is not available in something called Whispersynch.

I am loathe to give a bad review, especially when I haven't heard the book, but what else can I do?