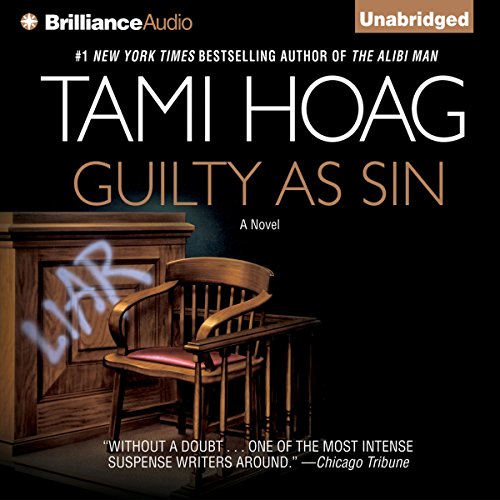 A cold-blooded kidnapper has been playing a twisted game with a terrified Minnesota town. Now a respected member of the community stands accused of a startling act of evil. But when a second boy disappears, a frightened public demands to know: Have the police caught the wrong man? Is the nightmare continuing...or just beginning?

Prosecutor Ellen North believes she’s building a case against a guilty man - and that he has an accomplice in the shadows. As she prepares for the trial of her career, Ellen suddenly finds herself swept into a cruel contest of twisted wits, a dark game of life and death...with an evil mind as guilty as sin.

What listeners say about Guilty as Sin

Great listen, but something is missing...

Have you listened to any of Jennifer VanDyck’s other performances before? How does this one compare?

Make sure you listen to Night Sins first! Great characters and great build up for the end, once the mystery is revealed there is not enough details about all that the "bad guys" did. I'm not one to rewrite an authors book but this ones ending did let me down a bit. still highly recommend it! But I feel like there is a lot left unresolved with these great characters.

This is a continuation of Night Sins, which ended abruptly without complete resolution. The story immediately picks back up with Guilty as Sin. The characters from the first book are all present, plus new characters are added. Josh, the boy kidnapped in the first book has been returned to his home but he is broken and his family is broken. His mom, Hannah, has thrown his despicable father out of the house. The supposed kidnapper, Garrick Wright, is in jail and will go to trial. However it is obvious that either he is not the kidnapper or there has been an accomplice. This book reveals the truth and the story concludes, finally.

This book, as was the first book, is too long. It could have been told quicker; however it is a pretty good book.

great charactwrs. didn't want to stop listening. ending a bit weak, but sets up for the next book. can't wait.

Beware, this is a continuation of another book.

Would you try another book from Tami Hoag and/or Jennifer Van Dyck?

Yes, I think Tami Hoag is a good author.

If you’ve listened to books by Tami Hoag before, how does this one compare?

This one isn't as great as others.

The performance was ok.

Did Guilty as Sin inspire you to do anything?

The list of characters was really long, and I had to write them down in a notebook to keep track. I don't know why so many characters were needed for the story.

All I can say is WOW!!! What a great thriller. Thoroughly enjoyed the story and the performance.

What would have made Guilty as Sin better?

not that I could see

May be i just don't like Tami Hoag's style.

This book was filled with twists and turns. Quite the thriller. on to the next.

Stuck to the formula

This book, as was the prequel, was very formulaic. In spite of that, the writing is good. The suspense is good. These two are some of the earlier books by this writer. I have read many of her books, and the early promise of a maturing writer comes to fruition in her more recent books.

A terrific writer. It's one of a series. They are all very good. She is my new favorite. The narration is also very good.

good but not great

A fantastic continuation of Night Sins with a surprise villain at the end. Tami Hoag doesn't disappoint.

This book seems to be an exact duplicate of Night Sins with a slight twist in the plot and characters the same but with different names. The characters in Night Sins appear in Guilty as Sin as almost a ghost like quality, a one dimensional person. The actual plot is great but this is the first book by Tami Hoag that I won’t recommend

I didn't bother finishing this book

I didn't even finish this book even though I usually like Tami. It had a cheap romance book vibe. The narrator was good though.

Tami is a great thriller writer

Another enjoyable read by Tami Hoag.... she is growing into one of my alltime favourites.